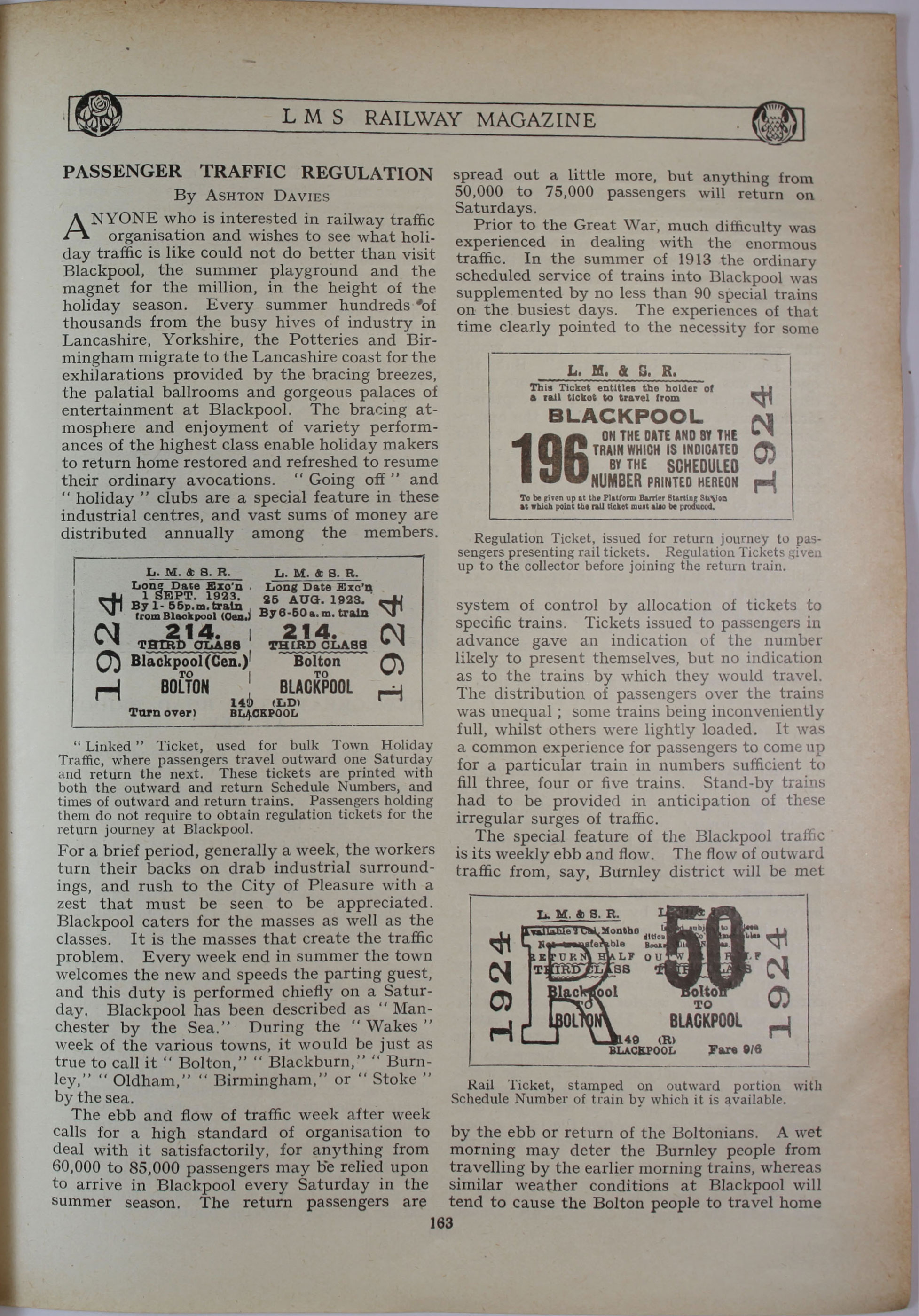 Extract from an article from LMS (London, Midland and Scottish) Railway Magazine, February 1924 about railway holiday traffic. It gives an insight into the nature of rail transport and holidays in 1920s Britain (Catalogue ref: ZPER 14/1)

Anyone who is interested in railway traffic organisation and wishes to see what holiday traffic is like could not do better than visit Blackpool, the summer playground and the magnet for the million, in the height of the holiday season. Every summer hundreds of thousands from the busy hives of industry in Lancashire, Yorkshire, the Potteries and Birmingham migrate to the Lancashire coast for the exhilarations provided by the bracing breezes, the palatial ballrooms and gorgeous palaces of entertainment at Blackpool. The bracing atmosphere and enjoyment of variety performances of the highest class enable holiday makers to return home restored and refreshed to resume their ordinary avocations. “Going off” and “holiday” clubs are special feature in these industrial centres, ad vast sums of money are distributed annually among the members.

Caption: “Linked” Ticket, used for bulk Town Holiday Traffic, where the passengers travel outward one Saturday and return the next. These tickets are printed with both the outward and return Schedule numbers, and times of outward and return trains. Passengers holding them do not require to obtain regulation tickets for the return journey to Blackpool.

For a brief period, generally a week, the workers turn their backs on drab industrial surroundings, and rush to the City of Pleasure with a zest that must be seen to be appreciated. Blackpool caters for the masses as well as the classes. It is the masses that create the traffic problem. Every week end in summer the town becomes the new and speeds the parting guest, and this duty is performed chiefly on Saturday. Blackpool has been described as “Manchester by the Sea”. During the “Wakes” week of the various towns, it would be just as true to call it “Bolton”, “Blackburn”, “Burnley”, “Oldham”, “Birmingham” or “Stoke” by the sea.

The ebb and flow of traffic week after week calls for a high standard of organisation to deal with it satisfactorily, for anything from 60,000 to 85,000 passengers may be relied upon to arrive in Blackpool every Saturday in the summer season. The return passengers are spread out a little more, but anything from 50,000 to 75,000 passengers will return on Saturdays.

Prior to the War, much difficulty was experienced in dealing with the enormous traffic. In the summer of 1913 the ordinary scheduled service of trains into Blackpool was supplemented by no less than 90 special trains on the busiest days. The experiences of that time clearly pointed to the necessity for some

Caption: Regulation ticket, issued for return journey to passengers presenting rail tickets. Regulation Tickets given up to the collector before joining the return train.

system of control by allocation of tickets to specific trains. Tickets issued to passengers in advance gave an indication of the number likely to present themselves, but no indication as to the trains by which they would travel. The distribution of passengers over the trains was unequal; some trains being inconveniently full, whilst others were lightly loaded. It was a common experience for passengers to come up for a particular train in numbers sufficient to fill three, four or five trains. Stand-by trains had to be provided in anticipation of these irregular surges in traffic.

The special feature of the Blackpool traffic is its weekly ebb and flow. The flow of outward traffic from, say, Burnley district will be met

[Illustration of Bolton to Blackpool ticket]

Caption: Rail Ticket, stamped on outward portion with Schedule Number of train by which it is available

By the ebb or return of the Boltonians. A wet morning may deter the Burnley people from travelling by the earlier morning trains, whereas similar weather conditions at Blackpool will tend to cause the Bolton people to travel home