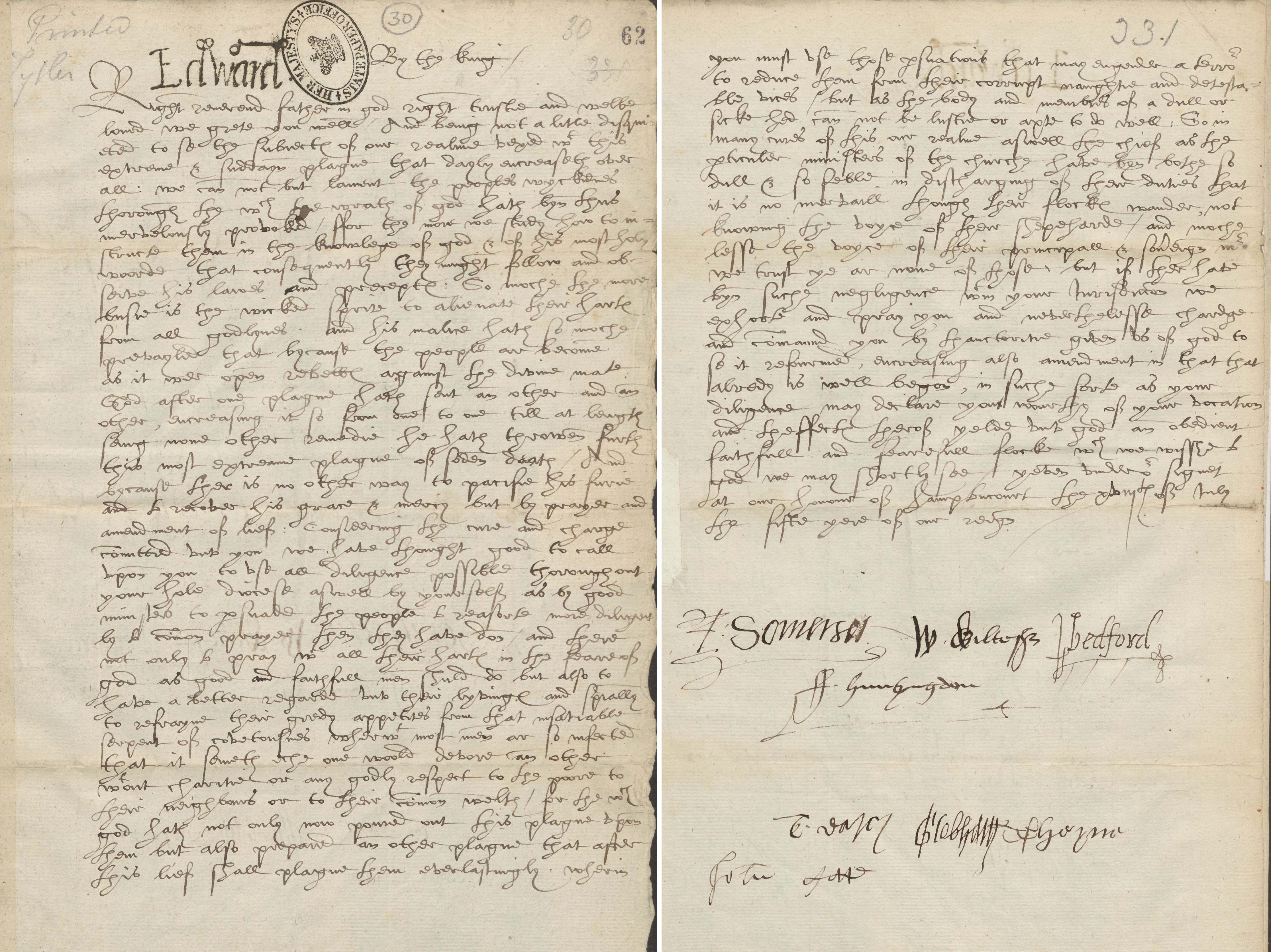 Since at least the 9th century, monarchs had ordered petitionary prayers to be said in the event of national disasters – such as bad weather or plague – as well as for man-made reasons, such as war. This was because people believed that all events, great and small, were ordered by divine providence. They believed that God had determined everything that would happen at the point of Creation (this was ‘general providence’); however, God could intervene to warn the people (for not being godly enough) or praise them (for being godly), and this was  ‘special providence’.  These views continued after the Reformation.  In this letter, Edward orders the bishops to organise prayers to end the ‘sweating sickness’, a viral disease that spread more quickly, and acted much faster, than the plague.  Around 15,000 people died of ‘the sweat’ in 1551, including the second and third dukes of Suffolk.

Edward. By the king

Right reverend father in god right trusty and well beloved, we greet you well.  And being not a little disquieted to see the subjects of our realm vexed with this extreme & sudden plague that daily increased over all: we cannot but lament the peoples’ wickedness thorough the which the wrath of god hath been thus marvellously provoked, for the more we study how to instruct them in the knowledge of god, & of his most holy word that consequently they might follow and observe his laws and precepts: So much the more busy is the wicked spirit to alienate their hearts from all godliness and his malice hath so much prevailed that because the people are become as it were open rebels against the divine [Master] God. After one plague hath sent another and another, increasing it so from one to one till at length seeing none other remedy he hath thrown forth this most extreme plague of sudden death, and because there is no other way to pacify his fury and to recover his grace & mercy but by prayer and amendment of life. Considering the cure and charge committed unto you we have thought good to call upon you to use all diligence possible thorough out your whole diocese as well by yourselves as by good ministers to persuade the people to resort more diligently to common prayer then they have done and there not only to pray with all their hearts in the fear of god as good and faithful men should do but also to have a better regard unto their living and specially to refrain their greedy appetites from that insatiable serpent of covetousness where with most men are so infected that it seems each one would devour another without charity or any godly respect to the poor to their neighbours or to their common wealth [wellbeing] for the which god hath not only now poured out this plague upon them but also prepared an other plague that after this life shall plague them everlastingly wherein

you must use those persuasions [reasons] that may engender a terror to reduce them from their corrupt naughty and detestable vices but as the body and members of a dull or sick head cannot be just or apt to do well. So in particular, ministers of the church have been both so dull & so feeble in discharging of their duties that it is no marvel though their flocks wander, not knowing the voice of their shepherd and much less the voice of their principal & sovereign master we trust ye are none of those, but if there hath been such negligence within your jurisdiction we exhort [encourage] and pray you and nevertheless charge and command you by the authority given us of god to see it reformed, increasing also amendment in that that already is well begun, in such sort as your diligence may declare you worthy of your vocation and the effects there of yield unto god an obedient faithful and fearful flock which we wish to god.  We may shortly see ye even under or signet at our honour of Hampton Court the 18th of July the fifth year of our reign.