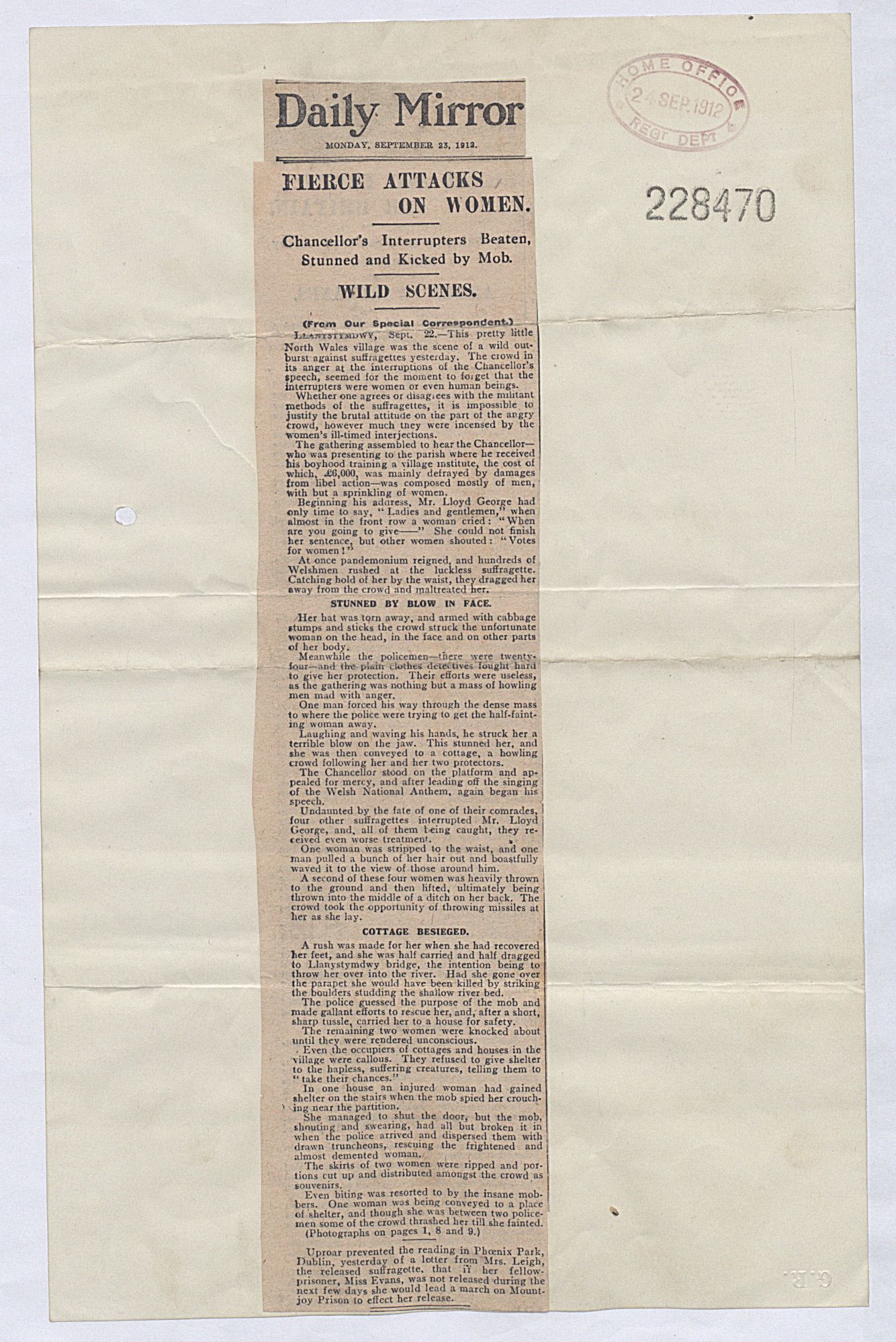 (From our Special Correspondent)

Llanystymdwy, Sept. 22- This pretty little North Wales village was the scene of a wild outburst against suffragettes yesterday. The crowd in its anger at the interruptions of the Chancellor’s speech, seemed for the moment to forget that the interrupters were women or even human beings.

Whether one agrees or disagrees with the militant methods of the suffragettes, it is impossible to justify the brutal attitude on the part of the angry crowd, however much they were incensed by the women’s ill-timed interjections.

The gathering assembled to hear the Chancellor – who was presenting to the parish where he received his boyhood training a village institute, the cost of which, £6,000, was mainly defrayed by damages from libel action – was composed mostly of men, but with a sprinkling of women.

Beginning his address, Mr. Lloyd George had only time to say, “Ladies and Gentlemen,” when almost in the front row a woman cried: “When are you going to give—”. She could not finish her sentence, but other women shouted: “Votes for Women!”

At once pandemonium reigned, and hundreds of Welshmen rushed at the luckless suffragette. Catching hold of her by the waist, they dragged her away from the crowd and maltreated her.

STUNNED BY BLOW IN FACE

Her hat was torn away and armed with cabbage stumps and sticks the crowd struck the unfortunate woman on the head, in the face and on other parts of her body.

Meanwhile the policeman – there were twenty-four – and three plain clothes detectives fought hard to give her protection. Their efforts were useless, as the gathering was nothing but a mass of howling men mad with anger.

One man forced his way through the dense mass to where the police were trying to get the faint fainting woman away.

Laughing and waving his hands, he struck her a terrible blow to the jaw. This stunned her, and she was then conveyed to a cottage, a howling crowd following her and her two protectors.

The Chancellor stood on the platform and appealed for mercy, and after leading off the singing of the Welsh National Anthem, again began his speech.

Undaunted by the fate of one of their comrades, four other suffragettes interrupted Mr. Lloyd George, and, all of them being caught, they received even worse treatment.

One woman was stripped to the waist, and one man pulled a bunch of her hair out and boastfully waved it to the view of those around him.

As the second of the four women was heavily thrown to the ground and then lifted, ultimately being thrown into the middle of a ditch on her back. The crowd took the opportunity of throwing missiles at her as she lay.

A rush was made for her when she had recovered her feet, and she was half carried and half dragged to Llanystymdwy bridge, the intention being to throw her over into the river. Had she gone over the parapet she would have been killed by striking the boulders studding the shallow river bed.

The remaining two women were knocked about until they were rendered unconscious.

Even the occupiers of cottages and houses in the village were callous. They refused to give shelter to the hapless, suffering creatures, telling them to “take their chances”.

In one house an injured woman had gained shelter on the stairs when the mob spied her crouching near the partition.

She managed to shut the door, but the mob, shouting and swearing, had all but broken it in when the police arrived and dispersed them with drawn truncheons rescuing the frightened and almost demented woman.

The skirts of the two women were ripped and portions of them ripped up and distributed amongst the crowd as souvenirs.

Even biting was resorted to by the insane mobbers. One woman was being conveyed to a place of shelter, and though she was between two policemen some of the crowd thrashed her till she fainted.