This extract from May-June 1607 describes how the Native Americans appeared to the writer. It appears in a text titled ‘The description of the new discovered river and country of Virginia; with the liklyhood of ensuing ritches, by England’s ayd and industry. / A brief description of the people.’ (CO1/1) 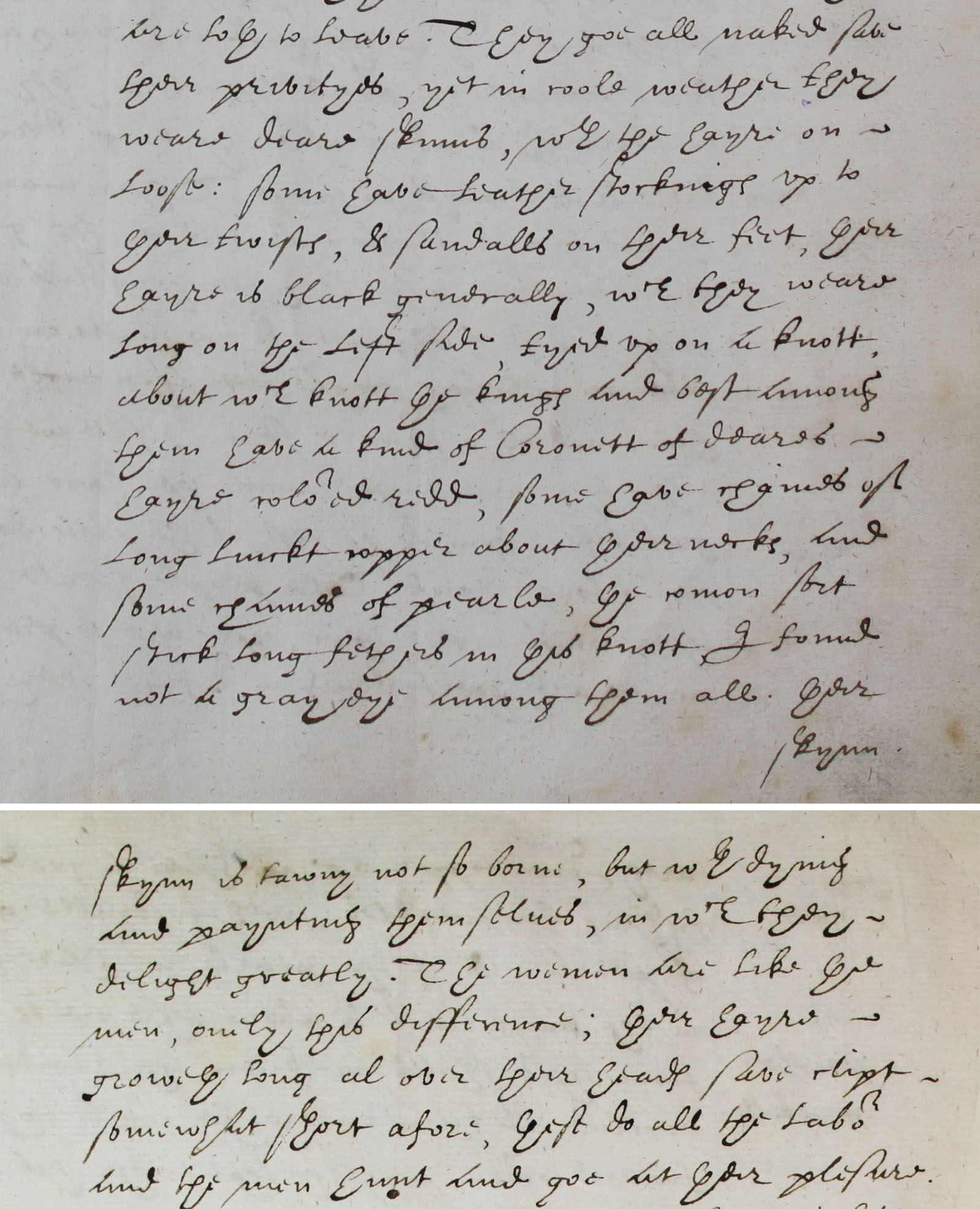 They goe all naked save their privityes, yet in coole weather they weare deare skinns, with the hayre on loose: some have leather stockinges vp to their twistes, & sandalls on their feet, their hayre is black generally, which they weare long on the left side, tyed vp on a knott, about which knott the kinges and best among them have a kind of Coronett of deares hayre coloured redd, some have chaines of long linckt copper about their neckesm and some chaines of pearle, the common sort stick long fethers in this knott, I found not a grey eye among them all. their

skynn is tawny not so borne, but with dying and paynting them selues, in which they – delight greatly. The wemen are like the men, onely this difference; their hayre – groweth long al over their heads save clipt – somewhat short afore, these do all the labour and the men hunt and goe at their plesure.

They go completely naked except for their privates [genitals], but in cool weather they wear deer skins with their hair loose: some have leather stockings up to their twistes [cloth covering their pelvis], & sandals on their feet. Their hair is black generally, which they wear long on the left side, tied up in a knot. Around the knot the kings and best among them have a kind of coronet [crown] of deer hair coloured red, some have chains of long linked copper around their necks and some chains of pearl. The common sort [most of them] stick long feathers in this knot [of hair]. I found none of them had grey eyes. Their skin is tawny [yellowish-brown] not by birth, but through dyeing and painting themselves, which delights them greatly. The women are like the men, with only this difference: their hair grows long all over their heads but is clipped somewhat short in the front. These [the women] do all the labour and the men hunt and go at their pleasure.

6. This extract from May-June 1607 describes how the Native Americans appeared to the writer.