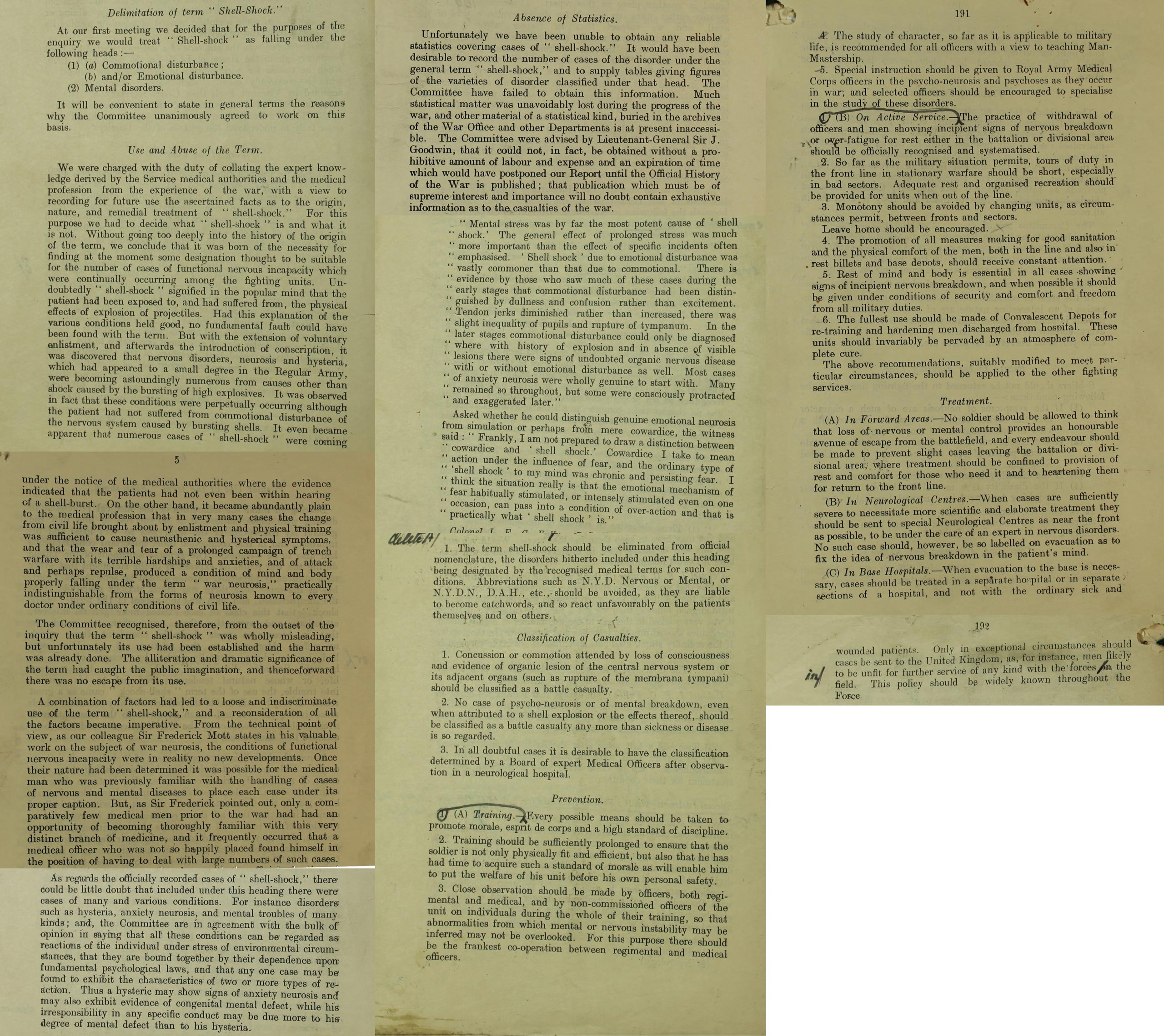 Probably over 250,000 men suffered from ‘shell shock’ as result of the First World War. The term was coined in 1915 by medical officer Charles Myers. At the time it was believed to result from a physical injury to the nervous system during a heavy bombardment or shell attack, later it became evident that men who had not been exposed directly to such fire were just as traumatised. This was a new illness that had never been seen before on this scale. The condition was poorly understood medically and psychologically. Today, the condition is known as post-traumatic stress disorder and the treatment and attitude to it are very different.

The discussion of anxiety within this report does not match current opinion on the condition and may be upsetting for some readers.

Extracts from a report from the War Office Committee of Enquiry into Causation and Prevention of `Shell-Shock’, (Catalogue ref: WO 32/4748)

At our first meeting we decided that for the purposes of the enquiry we would treat ‘Shell-shock’ as falling under the following heads:-

(b) and/or Emotional disturbance.

It will be convenient to state in general terms the reasons why the committee unanimously agreed to work on this basis.

Use and Abuse of the Term

We were charged with the duty of collating the expert knowledge derived by the Service medical authorities and the medical profession from the experience of the war, with a view to recording for future use the ascertained facts as to the origin, nature, and remedial treatment of ‘shell-shock.’ For this purpose we had to decide what ‘shell-shock’ is and what it is not. Without going too deeply into the history of the origin of the term, we conclude that it was born of the necessity for finding at the moment some designation thought to be suitable for the number of cases of functional nervous incapacity which were continually occurring among the fighting units. Undoubtedly ‘shell-shock’ signified in the popular mind that the patient had been exposed to, and had suffered from, the physical effects of explosion of projectiles. Had this explanation of the various conditions held good, no fundamental fault could have been found with the term. But with the extension of voluntary enlistment, and afterwards the introduction of conscription, it was discovered that nervous disorders, neurosis and hysteria, which had appeared to a small degree in the Regular Army, were becoming astoundingly numerous from causes other than shock caused by bursting shells. It even became apparent that numerous cases of ‘shell-shock’ were coming under the notice of the medical authorities where the evidence indicated that the patients had not even been within hearing of a shell-burst. On the other hand, it became abundantly plain to the medical profession that in very many cases the change from civil life brought about by enlistment and physical training was sufficient to cause neurasthenic and hysterical symptoms, and that the wear and tear of a prolonged campaign of trench warfare with its terrible hardships and anxieties, and of attack and perhaps repulse, produced a condition of mind and body properly falling under the term ‘war neurosis,’ practically indistinguishable from the forms of neurosis known to every doctor under ordinary conditions of civil life.

The Committee recognised, therefore, from the outset of the inquiry that the term ‘shell-shock’ was wholly misleading, but unfortunately its use had been established and the harm was already done. The alliteration and dramatic significance of the term had caught the public imagination, and thenceforward there was no escape from its use.

A combination of factors had led to a loose and indiscriminate use of the term ‘shell-shock,’ and a reconsideration of all the factors became imperative. From the technical point of view, as our colleague Sir Frederick Mott states in his valuable work on the subject of war neurosis, the conditions of functional nervous incapacity were in reality no new developments. Once their nature had been determined it was possible for the medical man who was previously familiar with the handling of cases of nervous and mental diseases to place each case under its proper caption. But, as Sir Frederick pointed out, only a comparatively few medical men prior to the war had had an opportunity of becoming thoroughly familiar with this very distinct branch of medicine, and it frequently occurred that a medical officer who was not so happily placed found himself in the position of having to deal with large numbers of such cases.

As regards the officially recorded cases of ‘shell-shock,’ there could be little doubt that included under this heading there were cases of many and various conditions. For instance disorders such as hysteria, anxiety neurosis and mental troubles of many kinds; and, the committee are in agreement with the bulk of opinion in saying that all these conditions can be regarded as reactions of the individual under stress of environmental circumstances, that they are bound together by their dependence upon fundamental psychological laws, and that any one case may be found to exhibit the characteristics of two or more types of reaction. Thus a hysteric may show signs of anxiety neurosis and may also exhibit evidence of congenital mental defect, while his irresponsibility in any specific conduct may be due more to his degree of mental defect than to his hysteria.

Unfortunately we have been unable to obtain any reliable statistics covering cases of ‘shell-shock.’ It would have been desirable to record the number of cases of the disorder under the general term ‘shell-shock’ and to supply tables giving figures of the varieties of disorder classified under that head. The Committee have failed to obtain this information. Much statistical matter was unavoidably lost during the progress of the war, and other material of a statistical kind, buried in the archives of the War Office and other Departments is at present inaccessible. The Committee were advised by Lieutenant-General Sir J. Goodwin, that it could not, in fact, be obtained without a prohibitive amount of labour and expense and an expiration of time which would have postponed our Report until the Official History of the War is published; that publication which must be of supreme interest and importance will no doubt contain exhaustive information as to the casualties of the war.

‘Mental stress was by far the most potent cause of shell shock. The general effect of prolonged stress was much more important than the effect of specific incidents often emphasised. ‘Shell Shock’ due to emotional disturbance was vastly commoner than that due to commotional. There is evidence by those who saw much of these cases during the early stages that commotional disturbance had been distinguished by dullness and confusion rather than excitement. Tendon jerks diminished rather than increased, there was slight inequality of pupils and rupture of tympanum. In the later stages commotional disturbance could only be diagnosed where with history of explosion and in absence of visible lesions there were signs of undoubted organic nervous disease with or without emotional disturbance as well. Most cases of anxiety neurosis were wholly genuine to start with. Many remained so throughout, but some were consciously protracted and exaggerated later.

Asked whether he could distinguish genuine emotional neurosis from simulation or perhaps from mere cowardice, the witness said: ‘Frankly, I am not prepared to draw a distinction between cowardice and ‘shell-shock.’ Cowardice I take to mean action under the influence of fear, and the ordinary type of ‘shell-shock’ to my mind was chronic and persisting fear. I think the situation really is that the emotional mechanism of fear habitually stimulated, or intensely stimulated even on one occasion, can pass into a condition of over-action and that is practically what ‘shell shock’ is.’

(B) On Active Service – 1. The practice of withdrawal of officers and men showing incipient signs of nervous breakdown of over-fatigue for rest either in the battalion or divisional area should be officially recognised and systemised.

Leave home should be encouraged.

The above recommendations, suitably modified to meet particular circumstances, should be applied to the other fighting services.