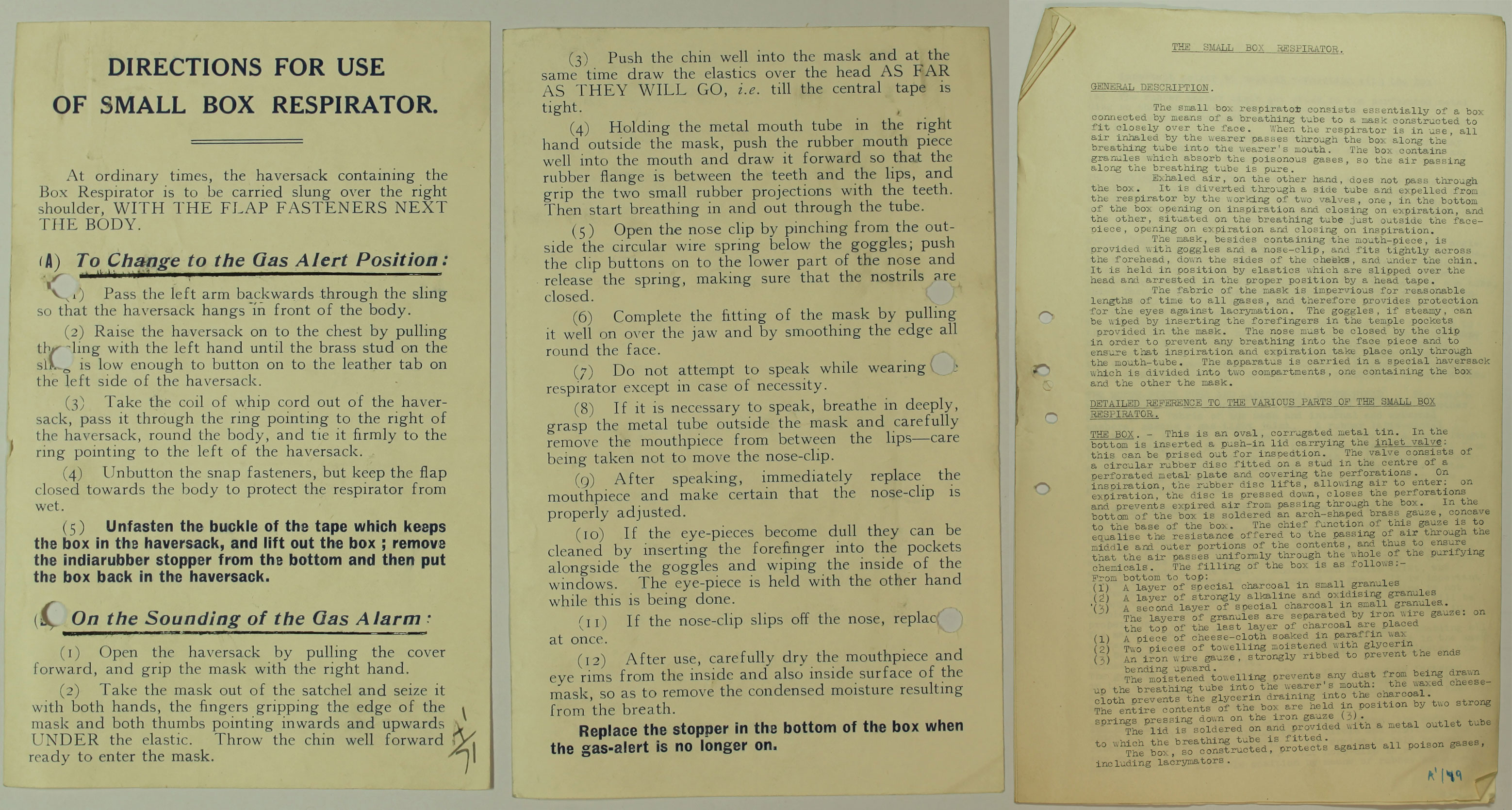 Instruction leaflet to explain to soldiers how to use a box respirator for protection during a gas alarm, (Catalogue ref: WO 142/183)

Directions of use of small box respirator.

At ordinary times, the haversack containing the Box Respirator is to be carried slung over the right shoulder, WITH THE FLAP FASTENERS NEXT THE BODY.

Replace the stopper in the bottom of the box when the gas-alert is no longer on.

Extract from notes from the War Office [Chemical Warfare Department] about the box respirator gas mask which explain how it worked, (Catalogue ref: WO142/183)

Exhaled air, on the other hand, does not pass through the box. It is diverted through a side tube and expelled from the respirator by the working of two valves, one, in the bottom of the box opening on inspiration and closing on expiration, and the other, situated on the breathing tube just outside the face-piece, opening on expiration and closing on inspiration.

The mask, besides containing the mouth piece, is provided with goggles and a nose-clip, and fits tightly across the forehead, down the sides of the cheeks, and under the chin. It is held in position by elastics which are slipped over the head and arrested in the proper position by a head tape.

The fabric of the mask is impervious for reasonable lengths of time to all gases, and therefore provides protection for the eyes against lachrymation [watering]. The goggles, if steamy, can be wiped by inserting the forefingers in the temple pockets provided in the mask. The nose must be closed by the clip in order to prevent any breathing into the face piece and to ensure that inspiration and expiration take place only through the mouth-tube. The apparatus is carried in a special haversack which is divided into two compartments, one containing the box and the other the mask.

DETAILED REFERENCE TO THE VARIOUS PARTS OF THE SMALL BOX RESPIRATOR.

THE BOX. – This is an oval, corrugated metal tin. In the bottom is inserted a push-in lid carrying the inlet valve: this can be prised out for inspection. The valve consists of a circular rubber disc fitted on a stud in the centre of a perforated metal plate and covering the perforations. On inspiration, the rubber disc lifts, allowing air to enter; on expiration, the disc is pressed down, closes the perforations and prevents expired air from passing through the box. In the bottom of the box is soldered an arch-shaped brass gauze, concave to the base of the box. The chief function of this gauze is to equalise the resistance offered to the passing of air through the middle and outer portions of the contents, and thus to ensure that the air passes uniformly through the whole of the purifying chemicals. The filling of the box is as follows:-

From bottom to top:

The moistened towelling prevents any dust from being drawn up the breathing tube into the wearer’s mouth: the waxed cheese-cloth prevents the glycerine draining into the charcoal.

The entire contents of the box are held in position by two strong springs pressing down on the iron gauze (3).

The lid is soldered on and provided with a metal outlet tube to which the breathing tube is fitted.

The box, so constructed, protects against all poison gases, including lachrymators [chemical that causes tears to flow]