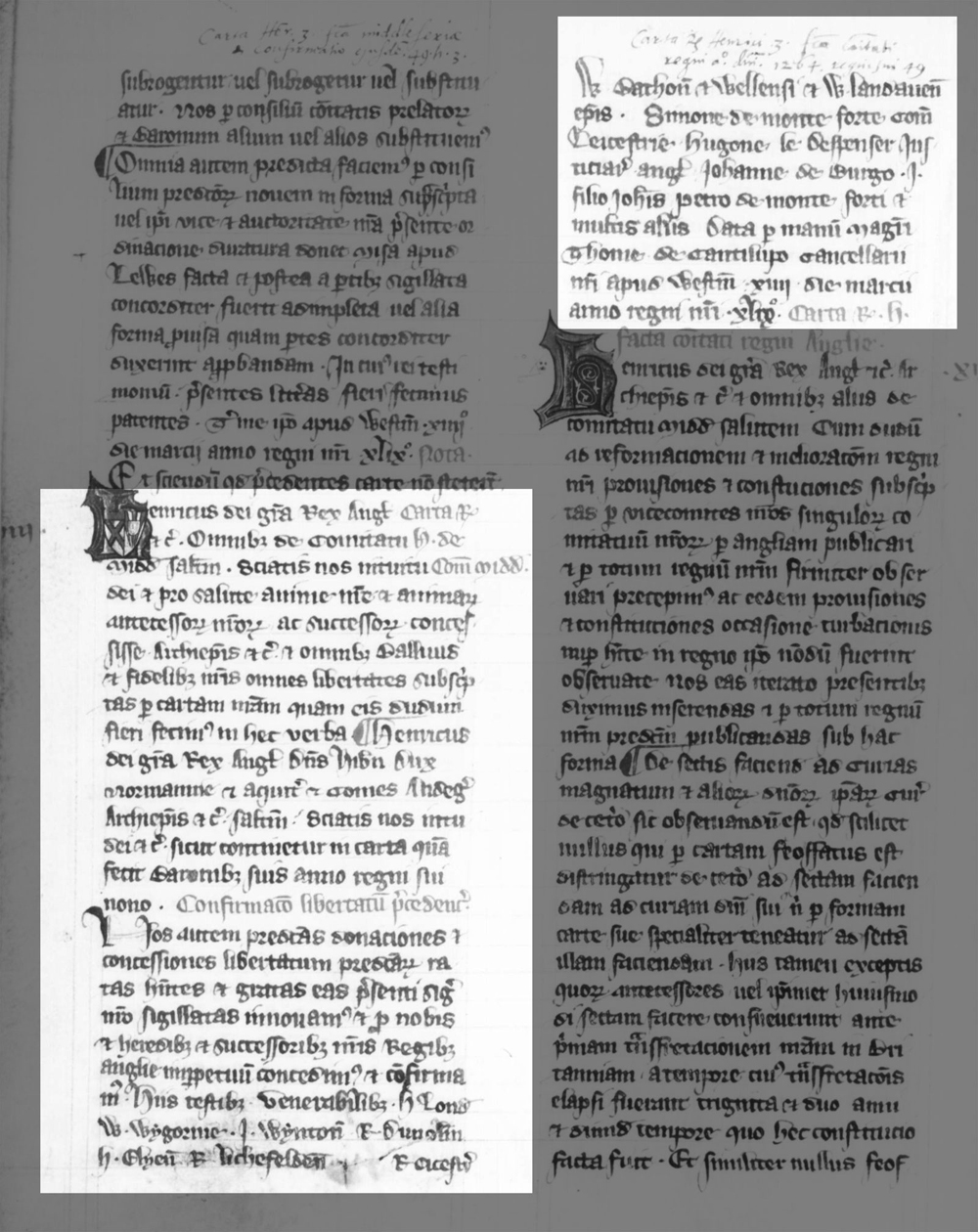 A royal promise to respect Magna Carta was nothing new (Henry had confirmed Magna Carta in 1237 and 1253). However, circumstances in 1265 made this occasion very different. Henry’s oath was not part of a ‘mutual bargain’ between king and subjects, instead, it was extracted from him by force. Cotton MS Claudius DII folios 127-132 © The British Library Board.

Henry by the grace of God King of England etc. To the archbishops etc. (and) all others of the county of Middlesex, greetings. Know that we, moved by reverence for God and the salvation of our soul and the souls of our ancestors and successors, have granted to the archbishops, bishops, abbots, priors, earls, barons, sheriffs, reeves, and all our bailiffs and faithful people all the liberties written below, by our charter, which formerly we caused to be made for them in these words: Henry by the grace of God King of England, lord of Ireland, duke of Normandy and Aquitaine and count of Anjou, to the archbishops etc., greetings. Know that we, moved by reverence for God etc., namely as is contained in the Charter that he made for his barons in the ninth year of his reign. We, moreover, holding the aforesaid gifts and grants of the aforesaid liberties to be reasonable and acceptable, renew them, sealed with our current seal, and grant and confirm them on behalf of ourselves, our heirs and successors, the kings of England, in perpetuity. Witnessed by H(enry of Sandwich) bishop of London, W(alter de Cantilupe) bishop of Worcester, J(ohn Gervase) bishop of Winchester, R(obert Stitchill) bishop of Durham, H(ugh Balsham) bishop of Ely, R(oger Meuland) bishop of Coventry and Lichfield, S(tephen Berksted) bishop of Chichester, W(alter Giffard) bishop of Bath and Wells, W(illiam de Radnor) bishop of Llandaff, Simon de Montfort earl of Leicester, Hugh Despenser justiciar of England, Thomas de Clare, John de Burgh, John fitz John, Peter de Montfort, Ralph de Camoys, Adam of Newmarket, Giles de Argentein, Roger de St John, Nicholas of Seagrave, William de Munchensi, John de Vescy, William Marmion, Walter de Crepping, Robert de Lisle, Ralph of Sandwich and others. Given by the hand of master Thomas de Cantilupe our chancellor at Westminster, on 14 March in the 49th year of our reign. The same king at the same time and before the same witnesses renewed and confirmed a new charter, the Charter which he made concerning the Forest for his barons in the ninth year of his reign.

© Reproduced by kind permission of The Magna Carta Project

Inspeximus of the charters, parliament of January 1265

Henry, by the grace of God King of England, sends greetings to all our faithful people. Know that we have been moved by our reverence for God to grant all that is contained in the charter [Magna Carta 1225]. Holding the grants and concessions of the charters of liberties to be reasonable and acceptable, we renew them, sealed with our current seal, and concede and confirm them on behalf of ourselves, our heirs and successors, the kings of England, in perpetuity.