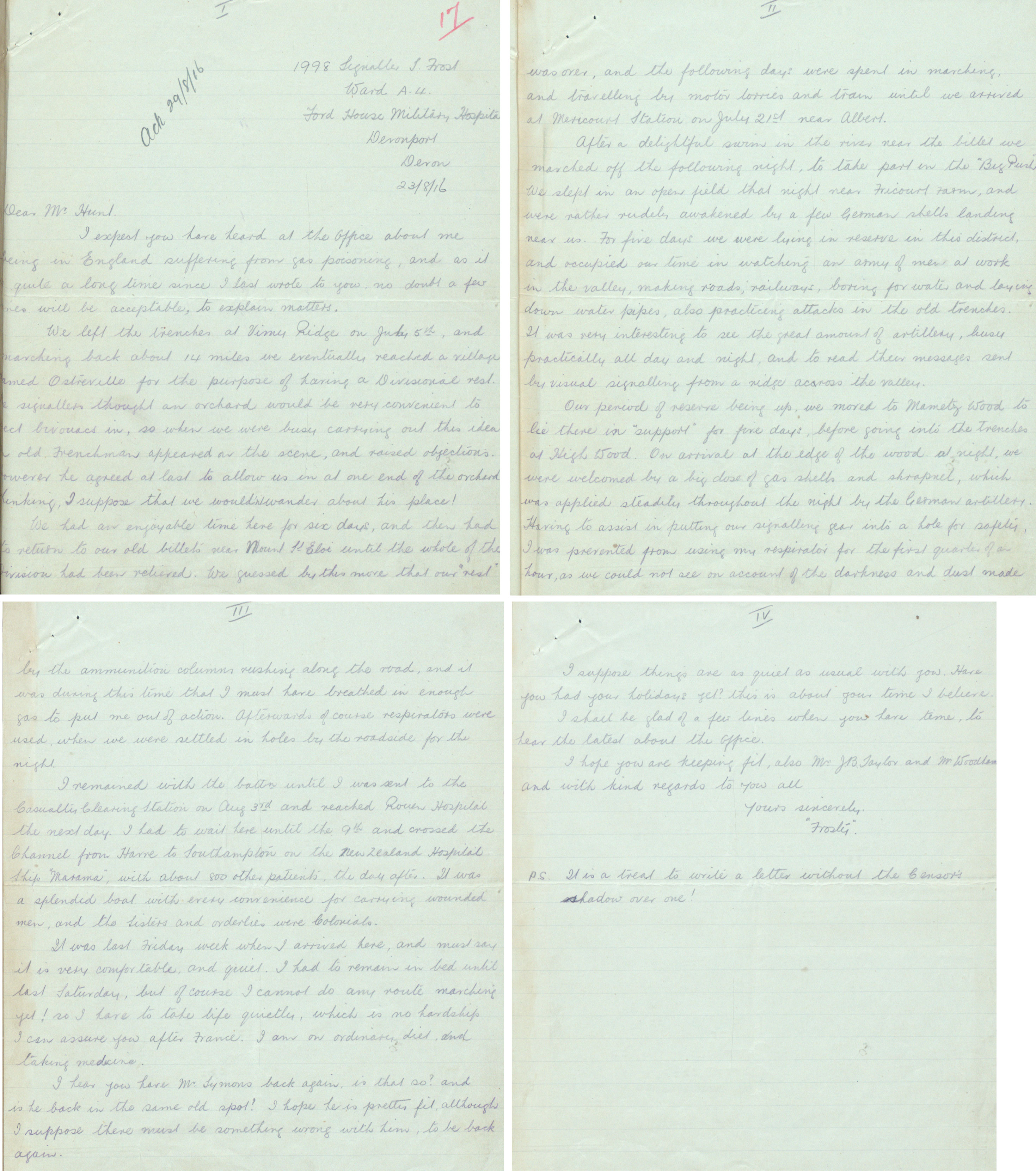 I expect you have heard at the office about me being in England suffering from gas poisoning, and as it is quite a long time since I last wrote to you, no doubt a few lines will be acceptable, to explain matters.

We left the trenches at Vimy Ridge on July 5th, and marching back about 14 miles we eventually reached a village named Ostreville for the purpose of having a divisional rest. The signallers thought an orchard would be very convenient to erect bivouacs in, so when we were busy carrying out this idea an old Frenchman appeared at the scene, and raised objections. However he agreed at last to allow us in at one end of the orchard, thinking, I suppose, that we would wander about his place! We had an enjoyable time here for six days, and then had to return to our old billets near Mount St. Eloi until the whole of the division had retired. We guessed by this move that our ‘rest’ was over, and the following days were spent in marching, and travelling by motor lorries and train until we arrived at Mericourt Station on July 21st near Albert.

After a delightful swim in the river near the billet we marched off the following night, to take part in the ‘big push.’ We slept in an open field that night near Fricourt farm, and were rather rudely awakened by a few German shells landing near us.

For five days we were lying in reserve in this district, and occupied our time in watching an army of men at work in the valley, making roads, railways, boring for water and laying down water pipes, also practicing attacks in the old trenches. It was very interesting to see the great amount of artillery, busy practically all day and night, and to read their messages sent by visual signalling [often using lights] from a ridge across the valley.

Our period in reserve being up, we moved to Mametz Wood to lie there in support for five days, before going into the trenches at High Wood. On arrival at the edge of the wood at night, we were welcomed by a big dose of gas shells and shrapnel, which was applied steadily throughout the night by the German artillery. Having to assist in putting our signalling gear into a hole for safety, I was prevented from using my respirator for the first quarter of an hour, as we could not see on account of the darkness and dust made by the ammunition columns rushing along the road, and it was during this time that I must have breathed in enough gas to put me out of action. Afterwards of course respirators were used, when we were settled in holes by the roadside for the night.

I remained with the battalion until I was sent to the casualty clearing station on August 3rd and reached Rouen hospital the next day. I had to wait until the 9th and crossed the channel from Havre to Southampton on the New Zealand ship Marama, with about 800 other patients, the day after. It was a splendid boat with every convenience for carrying wounded men, and the sisters and orderlies were colonials.

It was last Friday week when I arrived here, and must say it is very comfortable and quiet. I had to remain in bed until last Saturday, but of course I cannot do any route marching yet! So I have to take life quietly, which is no hardship I can assure you after France. I am on an ordinary diet, and taking medicine.

I hear you have Mr Symons back again, is that so? And is he back in the same old spot? I hope he is pretty fit, although I suppose there must be something wrong with him, to be back again.

I suppose things are as quiet as usual with you. Have you had your holidays yet? This is about your time I believe. I shall be glad of a few lines when you have time, to hear the latest about the office. I hope you are keeping fit, also Mr J.B. Taylor and Mr Woodhams and with kind regards to you all. Yours sincerely,

P.S. It is a treat to write a letter without the censor’s shadow over one!