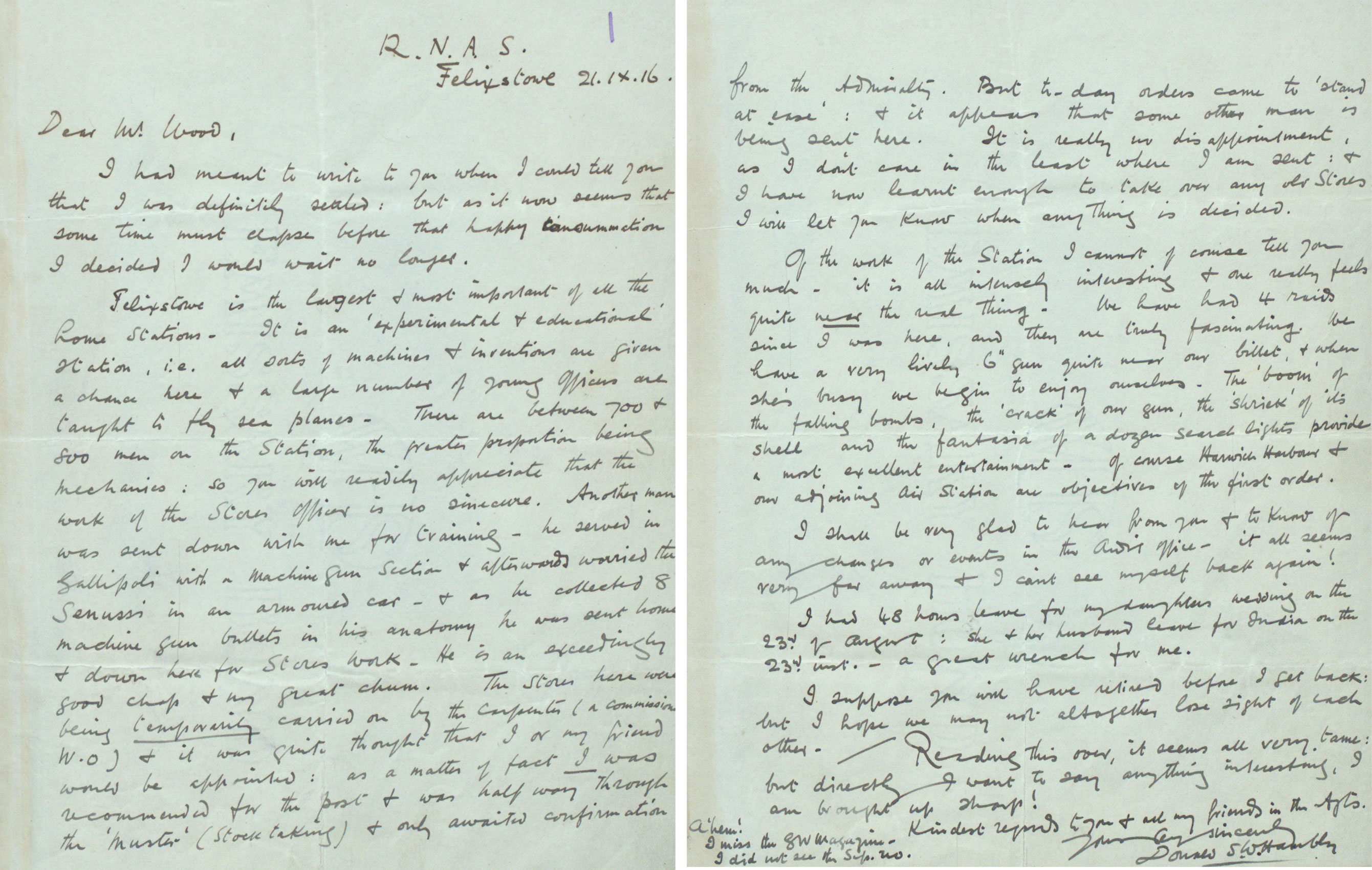 I had meant to write to you when I could tell that I was definitely settled, but as it now seems that some time must lapse before that happy consummation I decided that I would wait no longer.

Felixstowe is the largest and most important of all the home stations. It is an ‘experimental and educational’ station, i.e. all sorts of machines and inventions are given a chance here and a large number of young officers are taught to fly sea planes. There are between seven hundred and eight hundred men on the station, the greatest proportion being mechanics. So you will readily appreciate that the work of the Stores Officer is no sinecure. Another man was sent down with me for training, he served in Gallipoli with a machine gun section and afterwards worried the Senussi (a reference to Western Desert campaign in North Africa) in an armoured car and as he collected eight machine gun bullets in his anatomy he was sent home and down here for stores work. He is an exceedingly good chap and my great chum. The stores here were being temporarily carried on by the carpenter, a commissioned Warrant Officer and it was quite thought that I or my friend would be appointed, as a matter of fact I was recommended for the post and was halfway through the ‘muster’ (stock taking) and only awaited confirmation from the Admiralty.

But today orders came to ‘stand at ease’ and it appears that some other man is being sent here. It is really no disappointment, as I didn’t care in the least where I am sent, and I have now learnt enough to take over any old stores. I will let you know when anything is decided.

Of the work of the station I cannot of course tell you much, it is all intensely interesting and one really feels quite near the thing. We have had four raids since I was here, and they are truly fascinating. We have a very lively six inch gun, quite near our billet and when she’s busy we begin to enjoy ourselves. The boom of the falling bombs, the crack of our gun, the shriek of its shell and the fantasia of a dozen search lights provide a most excellent entertainment, of course Harwich Harbour and our adjoining Air Station are objectives of the first order.

I shall be very glad to hear from you and to know any changes or events in the Audit office, it all seems very far away and I can’t see myself back there again!

I had forty-eight hour’s leave for my daughter’s wedding on the 23rd of August, she and her husband leave for India on the 23rd instant, a great wrench for me.

I suppose you will have retired before I get back, but I hope we may not altogether lose sight of each other. Regarding this over, it seems all very tame but directly I want to say anything interesting, I am brought up sharp! Kindest regards to you and all my friends in the Agreements.

A’ hem! I miss the GW magazine. I did not see September number.