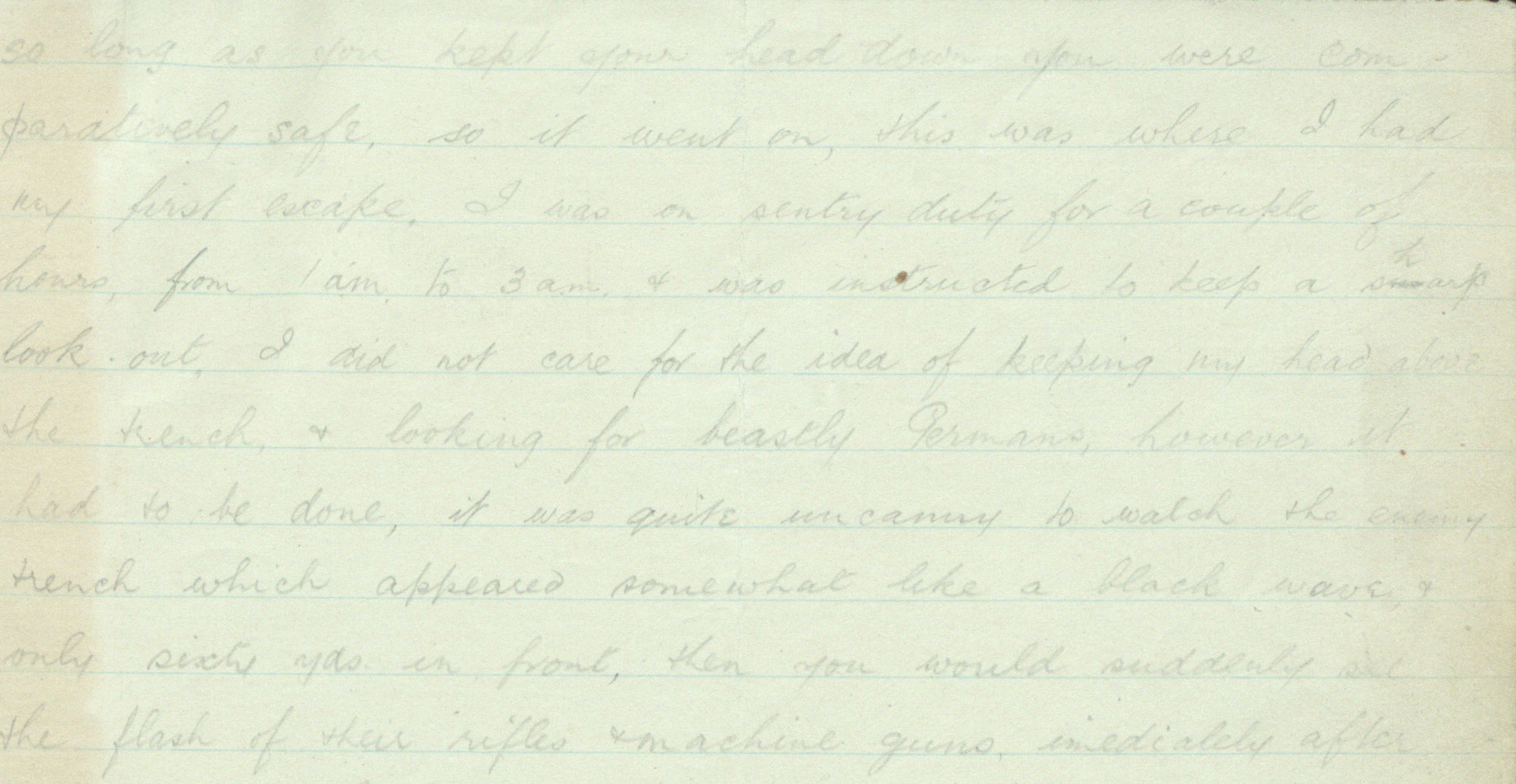 This is one of many letters sent by staff of the Great Western Railway Audit office at Paddington who had enlisted to fight in the First World War. Image shows part of letter (RAIL 253/516)

… As long as you kept your head down you were comparatively safe, so as it went on, this was where I had my first escape. I was on sentry duty for a couple of hours, from 1am to 3am and was instructed to keep a sharp look out. I did not care for the idea of keeping my head above the trench and looking for beastly Germans, however it had to be done, it was quite uncanny to watch the enemy trench which appeared somewhat like a black wave and only sixty yards in front, then you would suddenly see the flash of their rifles and machine guns immediately after would come the report and nasty thuds on the sandbags which you might be resting against. I fired about five shots at their flashes (the only target to aim at) then another two shells which lodged in the parapet either side of my head leaving about 2 to 3 inches between me and certain death. I thought that near enough but it turned out that it was to have something nearer than that. Our casualties here amounted on the average, to about two per day killed, of course, we thought it terrible at the time at least I did.

Early April saw us relieved by another division and we were sent a few miles back for a well-earned rest, which consisted of physical drill and a run before breakfast. The remainder of the morning being spent in platoon drill musketry drills. After dinner we put the “cap on” our rest (why so called I do not know) by having a route march for two hours. We spent a few days like this and were dispatched with all possible speed to Ypres, here we went in to support the Canadians and spent a most unpleasant eight days, during which time we lost several hundred men, nearly all my friends who came out in the same draft and were killed or wounded, we had to retire, the best part being that the Germans did not find this out until two days after when we were more or less safely bivouacking in a very pretty wood. We stayed here for about a week; then we got to work again, digging reserve trenches just behind the front line, building up parapets which had been demolished by the enemy’s high explosive shells and such like, working all night and getting what sleep we could in the daytime. One morning we were awakened by the most awful din, it seemed as though hell had broken loose, shells were falling like summer rain. And people have often told me in the course of conversation it was raining shells and I admit I took it with a grain of salt, could not be possible I thought, but such I was surprised to find was possible and actually taking place there about 3.30am. This bombardment started and about half an hour later, I, with three others, were ordered to start reinforcing. We went up in fours, it being considered safer that way, half a mile over open ground we had to do, this being swept continually with shells, to give you a slight idea I can say the previous night, just in front of our reserve trenches was a beautifully green field, and the next morning it was as much as one could do to see any grass at all, simply one mass of craters, varying in diameter from ten to twelve paces.

I had gone about half the required distance when a shell fell only a yard from where I was, the force of the concussion [explosion] pitched me several yards to my left and I came down rather heavily, however I reached the first line without any further mishap, where we had to stay until midnight when we had to be relieved again owing to not having enough me to hold the trench. Our honours were one V.C. (Victoria Cross), two D.S.O.  (Distinguished Service Orders), one Military Cross and one or two D.C.M. (Distinguished Conduct Medals).

The next day I paraded sick, my back paining me so much that I could not stand straight for a week after. I am now back with the regiment who are on the line of communications. We are having leave shortly and if possible will pay a visit to the Audit office. Have you any news of Chichester?