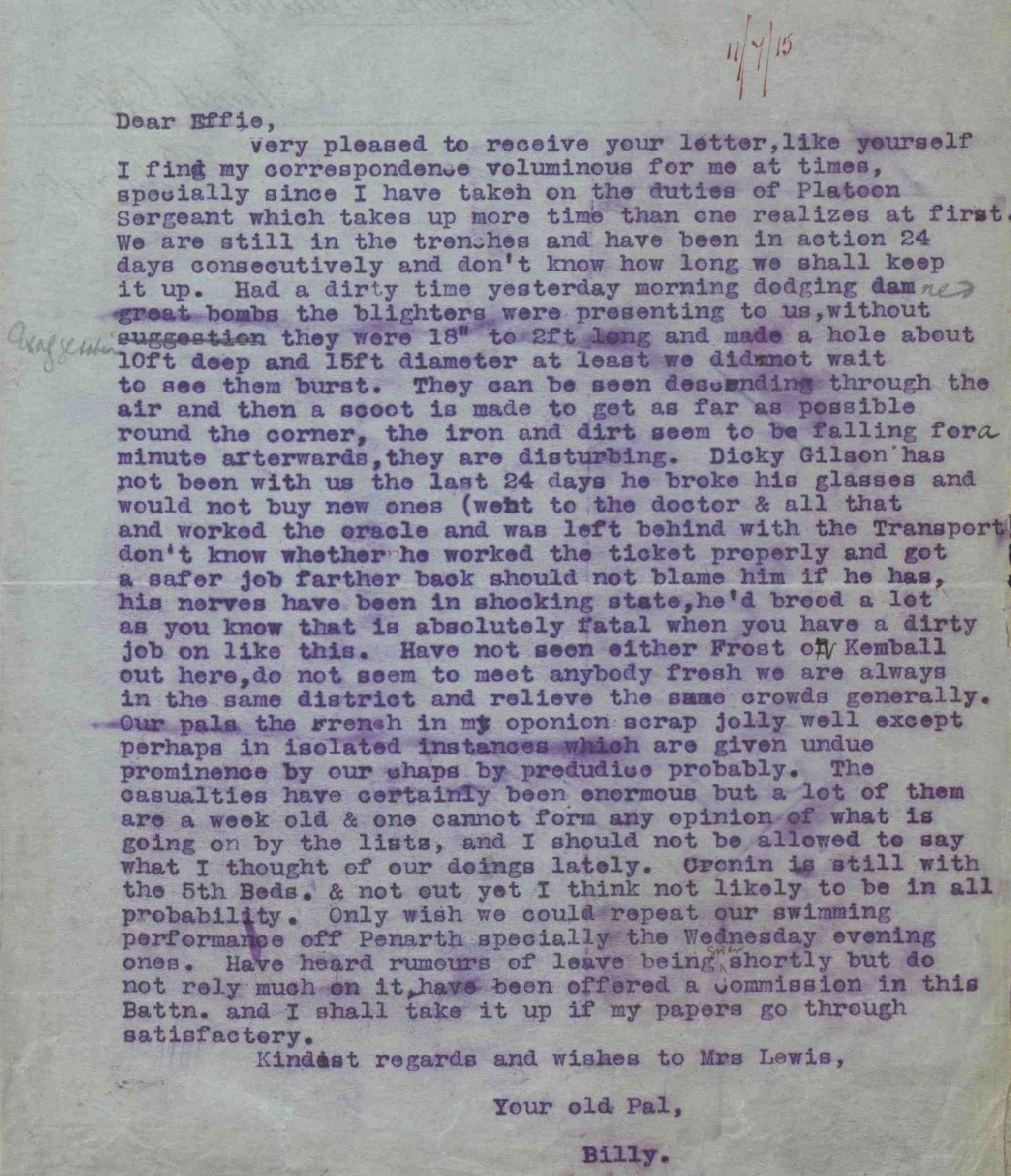 This is one of many letters sent by staff of the Great Western Railway Audit office at Paddington who had enlisted to fight in the First World War. This letter was typed out so that it could be circulated in the office where Effie (F.E. Lewis) worked. (RAIL 253/516)

Very pleased to receive your letter, like yourself I find my correspondence voluminous for me at times, especially since I have taken on the duties of Platoon Sergeant which takes up more time than one realises at first. We are still in the trenches and have been in action twenty four days consecutively and I don’t know long we shall keep it up. Had a dirty time yesterday morning dodging damned great bombs the blighters were presenting to us without exaggeration they were eighteen inches to a two feet long and made a hole about ten feet deep and fifteen feet diameter at least we did not wait to see them burst. They can be seen descending through the air and then a scoot is made to get as far as possible round the corner, the iron and dirt seem to be falling for a minute afterwards, they are disturbing. Dicky Gilson has not been with us the last twenty four days, he broke his glasses and would not buy new ones (went to the doctor and all that and worked the oracle and was left behind with the Transport, don’t know whether he worked the ticket properly and got a safer job farther back, should not blame him if he has, his nerves have been in a shocking state, he’d brood a lot as you know that is absolutely fatal when you have a dirty job on like this. I have not seen either Frost or Kemball out here, do not seem to meet anybody fresh as we are always in the same district and relieve the same crowds generally.

Our pals the French in my opinion scrap jolly well except in the isolated instances which are given undue prominence by our chaps by prejudice probably. The casualties have certainly been enormous but a lot of them are a week old and one cannot form any opinion of what is going on by the lists, and I should not be allowed to say what I thought of our doings lately. Cronin is still with the 5th Bedfordshires and not out yet, I think not likely to be in all probability. Only wish we could repeat our swimming performance off Penarth ‘specially the Wednesday evening ones. Have heard rumours of leave being given shortly but do not rely much on it, have been offered a Commission in this Battalion and I may take it up if my papers go through satisfactorily.