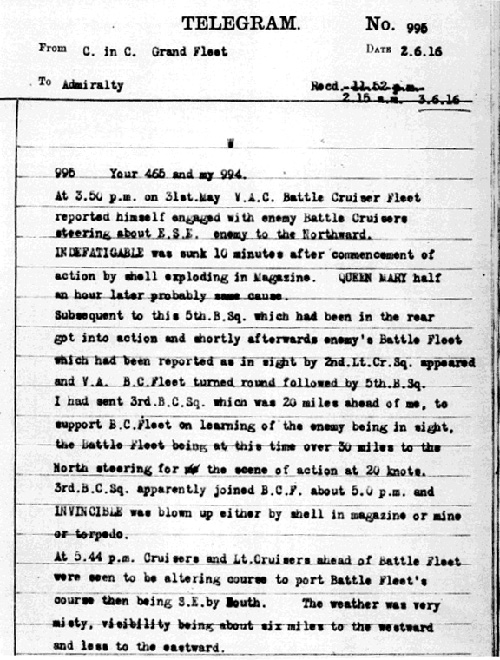 At 3.50 p.m. on 31st May V.A.C. Battle Cruiser Fleet reported himself engaged with enemy Battle Cruisers steering about E.S.E. enemy to the Northward. INDEFATIGABLE was sunk 10 minutes after commencement of action by shell exploding in Magazine. QUEEN MARY half an hour later probably same cause.

Subsequent to this 5th B.Sq which had been in the rear got into action and shortly afterwards enemy’s Battle Fleet which had been reported as in sight by 2nd.Lt.Cr.Sq. appeared and V.A. B.C. fleet turned round followed by 5th B.Sq. I had send 3rd.B.C.Sq. which was 20 miles ahead of me, to support B.C.Fleet on learning of the enemy being in sight, the Battle Fleet being at this time over 30 minutes to the North steering for the scene of action at 20 knots.

3rd.B.C.Sq. apparently joined B.C.F. about 5.0 p.m. and INVINCIBLE was blown up either by shell in magazine or mine or torpedo.

At 5.44 p.m. Cruisers and Lt.Cruisers ahead of Battle Fleet were seen to be altering courses to port Battle Fleet’s course then being S.E.by South. The weather was very misty, visibility being about six miles to the westward and less to the eastward.

« Return to Jutland: Death at sea

2. Look at Source 2. This is a telegram reporting on the sinking of the Indefatigable.