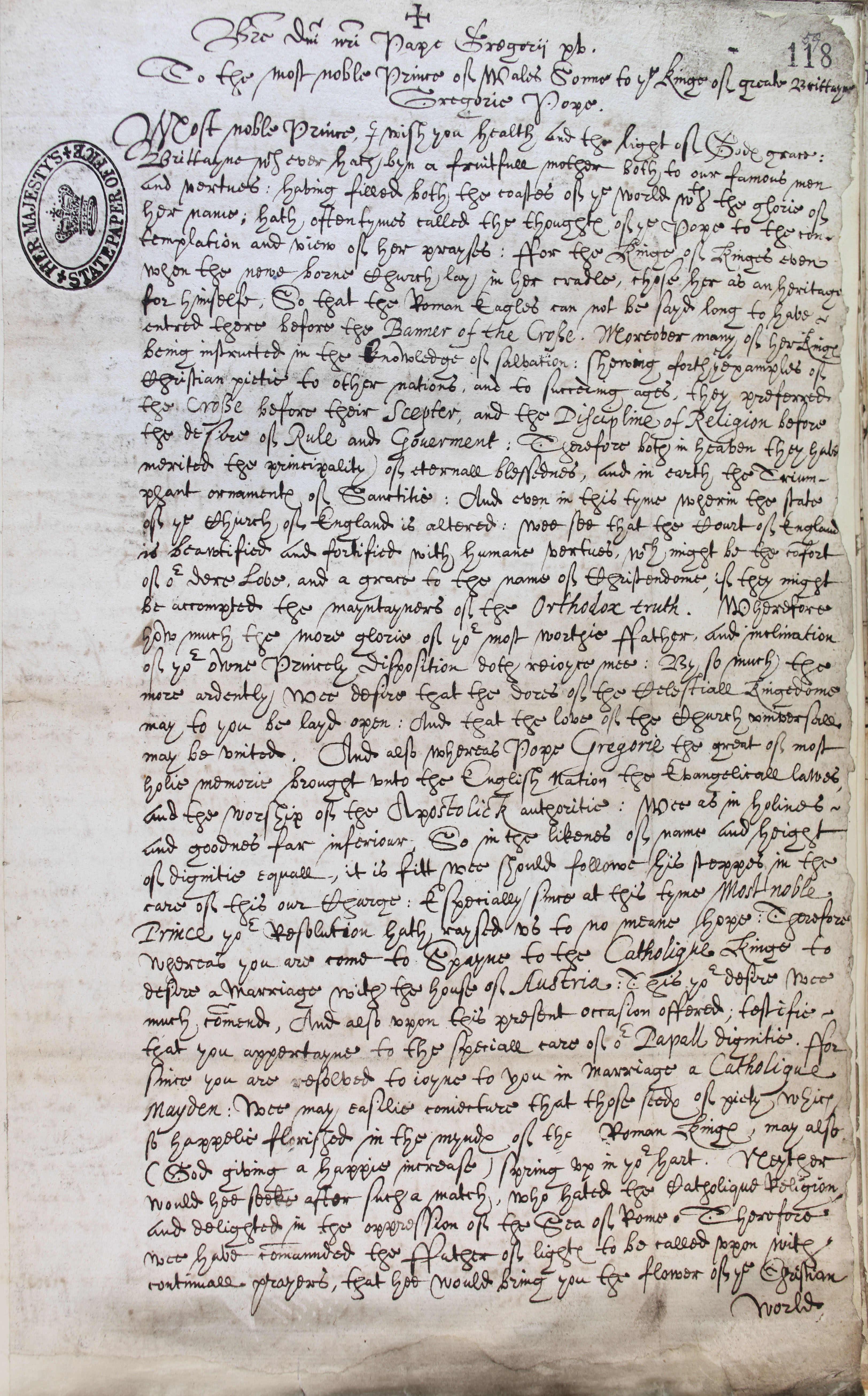 Here we have a glimpse of the relationship between royal family and papacy and the influence of Catholicism. The Pope regrets the altered state of Britain and hopes he may be permitted to see Catholicism re-established by the conversion of the Prince, ‘the flower of the Christian world’, and by his proposed Spanish marriage to a Catholic Princess, showing that he does not hate the See of Rome.

Most noble Prince, I wish your health and the light of God’s grace: Britain which ever hath been a fruitful mother both to our famous men and virtuous: having filled both the coasts of the world with the glory of her name; hath often times called the thoughts of the Pope to the contemplation and view of her prayers: For the King of Kings even when the new born Church lay in her cradle, chose her as an heritage for himself, so that the Roman Eagles cannot be said long to have entered there before the Banner of the Cross. Moreover many of her kings being instructed in the knowledge of salvation: showing forth the examples of Christian piety to other nations, and to succeeding ages, they preferred the Cross before their Sceptre, and the Discipline of Religion before the desire of Rule and Government: Therefore both in heaven they hath merited the principality of eternal blessedness, and in earth the Triumphant ornaments of Sanctity: And even in this time wherein the state of the Church in England is altered: We see that the Court of England is beautified and fortified with humane virtues which might be the comfort of our dear love, and a grace to the name of Christendom, if they might be accounted the maintainers of the Orthodox truth. Wherefore how much the more glory of your most worthy Father and inclination of your own princely disposition doth rejoice me: By so much the more ardently we desire that the doors of the Celestial Kingdom [Heaven] may to you be laid open: And that the love of the Church universal may be united. And also whereas Pope Gregory the Great of most holy memory brought unto the English Nation the Evangelical laws and the worship of the Apostolic authority, we as in holiness and goodness far inferior; so in the likeness of name and height of dignity equal, it is fit we should follow his steps in the care of this our charge: especially since at this time most noble Prince your resolution hath raised us to no mean hope: Therefore whereas you are come to Spain to the Catholic King to desire a marriage with the house of Austria: This your desire we much commend, and also upon this present occasion offered, testify that you appertain to the special care of our Papal dignity. For since you are resolved to join to you in marriage a Catholic maiden: We may easily conjecture that those seeds of piety which so happily flourished in the mind of the Roman Kings may also (God giving a happy increase) spring up in your heart. Whither would he seek after such a match, who hated the Catholic Religion and delighted in the oppression of the See of Rome. Therefore we have commanded the Father of light to be called upon with continual prayers, that he would bring you the flower of the Christian World…..