Extracts from a Scottish Church pamphlet addressed to the people of Lothian and Tweeddale, 2 November 1715 (SP 54/10/5B) 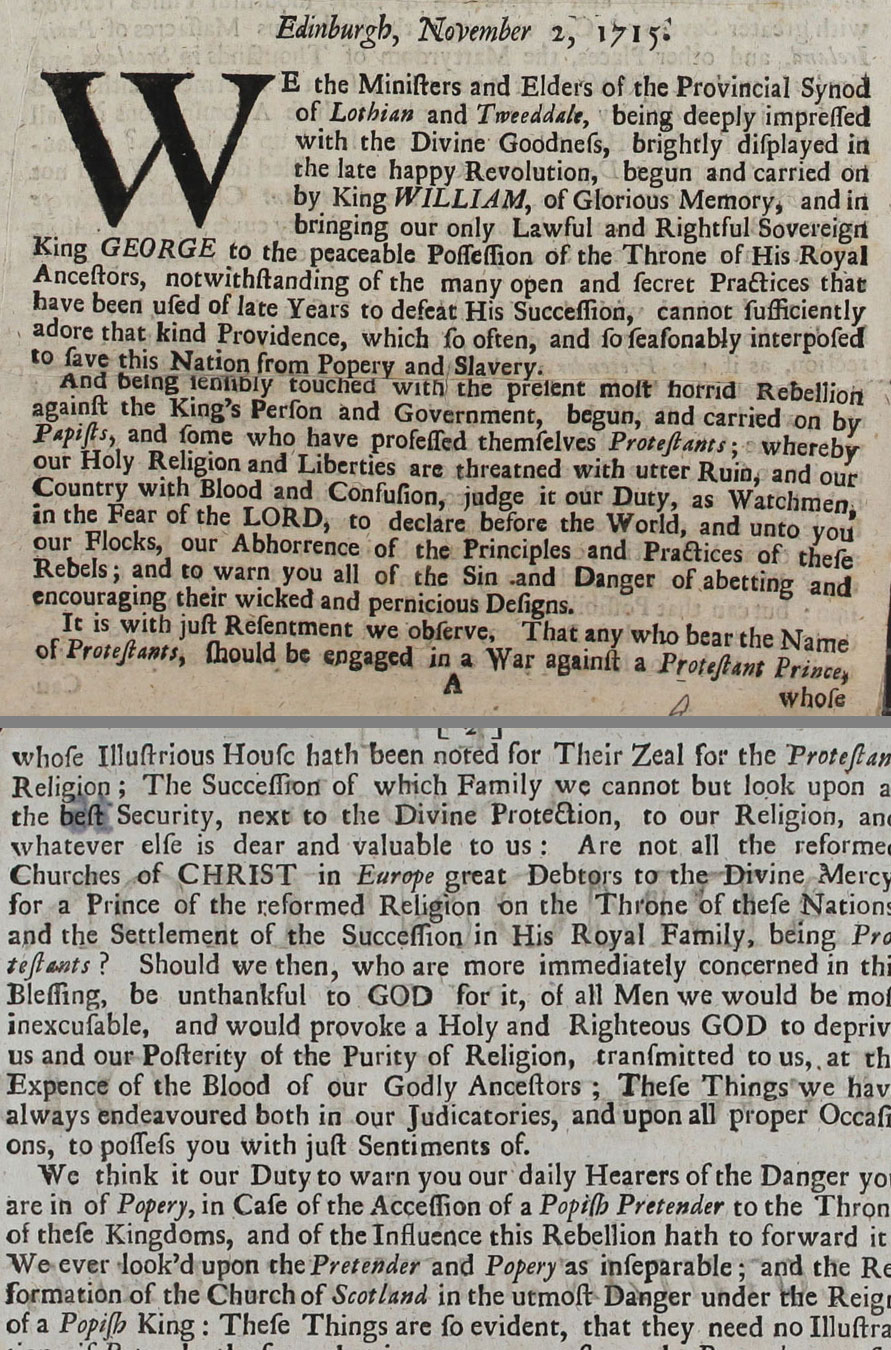 WE the Ministers and Elders of the Provincial Synod of Lothian and Tweeddale, being deeply impressed with the Divine Goodness, brightly displayed in the late happy Revolution, begun and carried on by King WILLIAM of Glorious Memory, and in bringing our only Lawful and Rightful Sovereign King GEORGE to the peaceable Possession of the Throne of His Royal Ancestors, notwithstanding of the many open and secret Practices that have been used of late Years to defeat His Succession, cannot sufficiently adore that kind Providence, which so often, and so seasonably interposed to save this Nation from Popery and Slavery.

And being sensibly touched with the present most horrid Rebellion against the King’s Person and Government, begun, and carried on by Papists and some who have professed themselves Protestants; whereby our Holy Religion and Liberties are threatened with utter Ruin, and our Country with Blood and Confusion, judge it our Duty, as Watchmen, in the Fear of the LORD, to declare before the World, and unto you our Flocks our Abhorrence of the Principles and Practices of these Rebels; and to warn you all of the Sin and Danger of abetting and encouraging their wicked and pernicious Designs.

It is with just Resentment we observe, That any who bear the Name of Protestants, should be engaged in a War against a Protestant Prince,

whose Illustrious House hath been noted for Their Zeal for the Protestant Religion; The Succession of which Family we cannot but look upon us as the best Security, next to the Divine Protection, to our Religion, and whatever else is dear and valuable to us: Are not all the reformed Churches of CHRIST in Europe GREAT Debtors to the Divine Mercy, for a Prince of the reformed Religion on the Throne of these Nations, and the Settlement of the Succession in His Royal Family, being Protestants? Should we then, who are more immediately concerned in this Blessing, be unthankful to GOD for it, of all Men we would be most inexcusable, and would provoke a Holy and Righteous GOD to deprive us and our Posterity of the Purity of Religion, transmitted to us, at the Expence of the Blood of our Godly Ancestors; These Things we have always endeavoured both in our Judicatories and upon all proper Occasions, to possess you with just Sentiments of.

We think it is our Duty to warn you our daily Hearers of the Danger you are in of Popery, in Case of the Accession of a Popish Pretender to the Throne of these Kingdoms, and of the Influence this Rebellion hath to forward it: We ever look’d upon the Pretender and Popery as inseparable; and the Reformation of the Church of Scotland in the utmost Danger under the Reign of a Popish King: These Things are so evident …

Providence: care and guidance of God

Popery: the Roman Catholic Church, especially its doctrines, ceremonies, and system of government