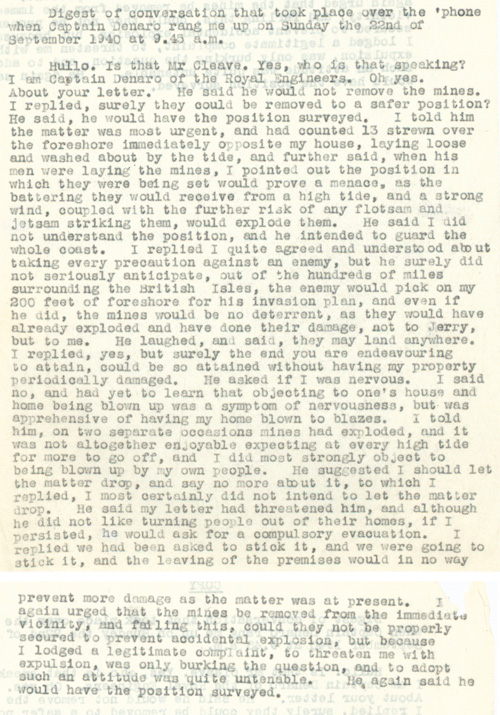 Digest of conversation that took place over the ‘phone when Captain Denaro rang me up on Sunday the 22nd of September 1940 at 9.45 a.m.

Hullo.  Is that Mr Cleave.  Yes, who is that speaking?  I am Captain Denaro of the Royal Engineers.  Oh yes.  About your letter.  He said he would not remove the mines.  I replied, surely they could be removed to a safer position?  He said, he would have the position surveyed.  I told him the matter was most urgent, and had counted 13 strewn over the foreshore immediately opposite my house, laying loose and washed about by the tide, and further said, when his men were laying the mines, I pointed out the position in which they were being set would prove a menace, as the battering they would receive from a high tide, and a strong wind, coupled with the further risk of any flotsam and jetsam striking them, would explode them.  He said I did not understand the position, and he intended to guard the whole coast.  I replied I quite agreed and understood about taking every precaution against an enemy, but he surely did not seriously anticipate, out of the hundreds of miles surrounding the British Isles, the enemy would pick on my 200 feet of foreshore for his invasion plan, and even if he did, the mines would be no deterrent, as they would have already exploded and have done their damage, not to Jerry, but to me.  He laughed, and said, they may land anywhere.  I replied, yes, but surely the end you are endeavouring to attain, could be so attained without having my property periodically damaged.  He asked if I was nervous.  I said no, and had yet to learn that objecting to one’s house and home being blown up was a symptom of nervousness, but was apprehensive of having my home blown to blazes.  I told him on two separate occasions mines had exploded, and it was not altogether enjoyable expecting at every high tide for more to go off, and I did most strongly object to being blown up by my own people.  He suggested I should let the matter drop, and say no more about it, to which I replied, I most certainly did not intend to let the matter drop.  He said my letter had threatened him, and although he did not like turning people out of their homes, if I persisted, he would ask for a compulsory evacuation.  I replied we had been asked to stick it, and we were going to stick it, and the leaving of the premises would in no way prevent more damage as the matter was at present.  I again urged that the mines be removed from the immediate vicinity, and failing this, could they not be properly secured to prevent accidental explosion, but because I lodged a legitimate complaint, to threaten me with expulsion, was only burking the question, and to adopt such an attitude was quite untenable.  He again said he would have the position surveyed.

« Return to The Home Front

6. Read Source 6. This is a telephone conversation between Mr Cleave and Captain Denaro – a mine laying specialist – in 1940.