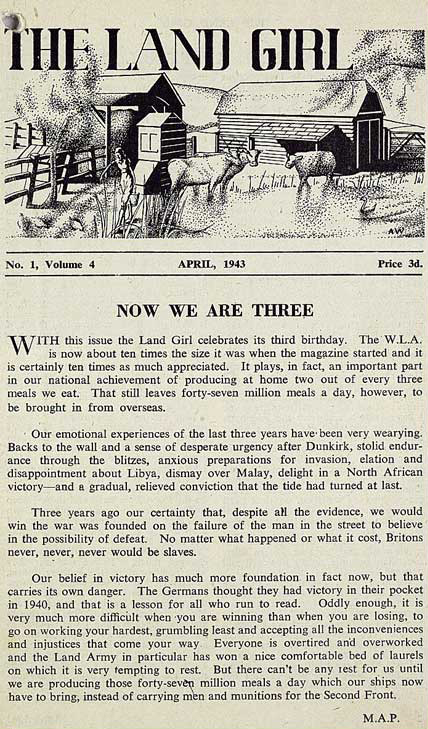 The Land Girl magazine helped to prevent land girls from feeling isolated and first went on sale on 1st April 1940 for the cost of 4d. [2 pence]. It started as an unofficial Women’s Land Army publication. It became very popular, selling around 21,000 a week. The Ministry of Agriculture realised its popularity and paid for its production. The extracts shown here provide some insight into the role of the Women’s Land Army and how some land girls engaged with the magazine. Catalogue ref: MAF 59/22

The Women’s Land Army was set up in June 1939 and by September it had over 1,000 members. By 1941, its numbers had risen to 20,000 and, at its peak in 1943, over 80,000 women classed themselves as ‘Land Girls’. Numbers did not rise after that, as women were needed to make aircraft and were encouraged to take up factory work instead.

THE LAND GIRL
No. 1, Volume 4
APRIL, 1943
Price 3d.
NOW WE ARE THREE
With this issue the Land Girl celebrates its third birthday. The W.I.A. is now about ten times the size it was when the magazine started and it is certainly ten times as much appreciated. It plays, in fact, an important part in our national achievement of producing at home two out of every three meals we eat. That still leaves forty-seven million meals a day, however, to be brought in from overseas.
Our emotional experiences of the last three years have been very wearying. Backs to the wall and a sense of desperate urgency after Dunkirk, stolid endurance through the blitzes, anxious preparations for invasion, elation and disappointment about Libya, dismay over Malay, delight in a North African victory – and a gradual, relieved conviction that the tide had turned at last.
Three years ago our certainty that, despite all the evidence, we would win the war was founded on the failure of the man in the street to believe in the possibility of defeat. No matter what happened or what it cost, Britons never, never, never, would be slaves.
Our belief in victory has much more foundation in fact now, but that carries its own danger. The Germans thought they had victory in their pocket in 1940, and that is a lesson for all who run to read. Oddly enough, it is very much more difficult when you are winning than when you are losing, to go on working your hardest, grumbling least and accepting all the inconveniences and injustices that come your way. Everyone is overtired and overworked and the Land Army in particular has won a nice comfortable bed of laurels on which it is very tempting to rest. But there can’t be any rest for us until we are producing those forty-seven million meals a day which our ships now have to bring, instead of carrying men and munitions for the Second Front.
M.A.P.