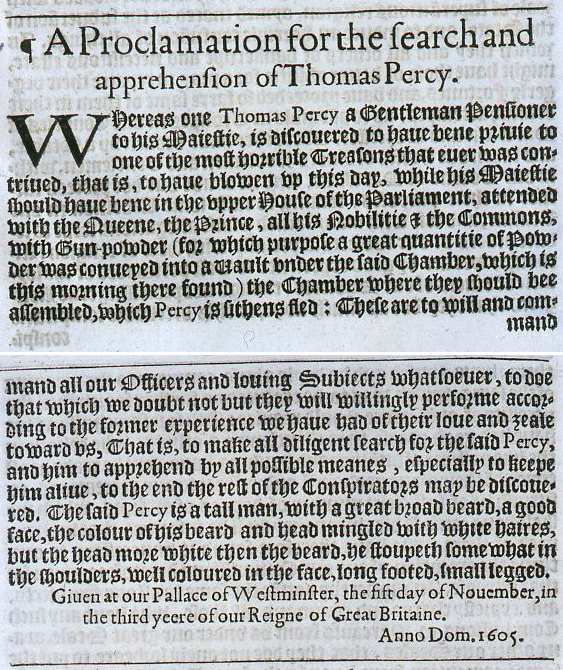 Whereas one Thomas Percy, a Gentleman Pensioner to his Majesty, is discovered to have been privy to one of the most horrible Treasons that ever was contrived, that is, to have blown up this day, while his Majesty should have been in the upper House of the Parliament, attended with the Queen, the Prince, all his nobility and the Commons with Gunpowder (for which purpose a great quantity of Powder was conveyed into a vault under the said Chamber, which is this morning there found) the Chamber where they should be assembled, which Percy is sithens fled: These are to will and command all our Officers and loving Subjects whatsoever, to do that which we doubt not but they will willingly perform according to the former experience we have had of their love and zeal towards us, That is, to make all diligent search for the said Percy, and to apprehend by all possible means, especially to keep him alive, to the end the rest of the Conspirators may be discovered. The said Percy is a tall man, with a great broad beard, a good face, the colour of his beard and head mingled with white hairs, but the head more white than the beard, he stoopeth somewhat in the shoulders, well coloured in the face, long footed, small legged. Given at our Palace of Westminster, the fifth day of November, in the third year of our reign in Great Britain. Anno Domini 1605

Whereas one Thomas Percy, a bodyguard to the King is found to have been involved in one of the most horrible acts of Treason ever planned, that is, while the King, Queen, Prince, all the nobility and the commons were in the upper house, it was to be blown up with gunpowder (and for this purpose a great deal of powder was moved into a cellar under the house which was found there this morning), and Percy has now run away. These commands call our Officers and loyal subjects to willingly search for Percy and arrest him using all possible means, but keeping him alive, so we can discover the rest of the plotters.  Percy is a tall man with a great broad beard and a good face.  His beard and head is sprinkled with white hairs, however his head is whiter than his beard.  He stoops slightly and has a good colour in his face as well as big feet and short legs. Given at the Palace of Westminster, the fifth of November 1605.

3. This is a proclamation (royal demand) made after the plot was discovered.