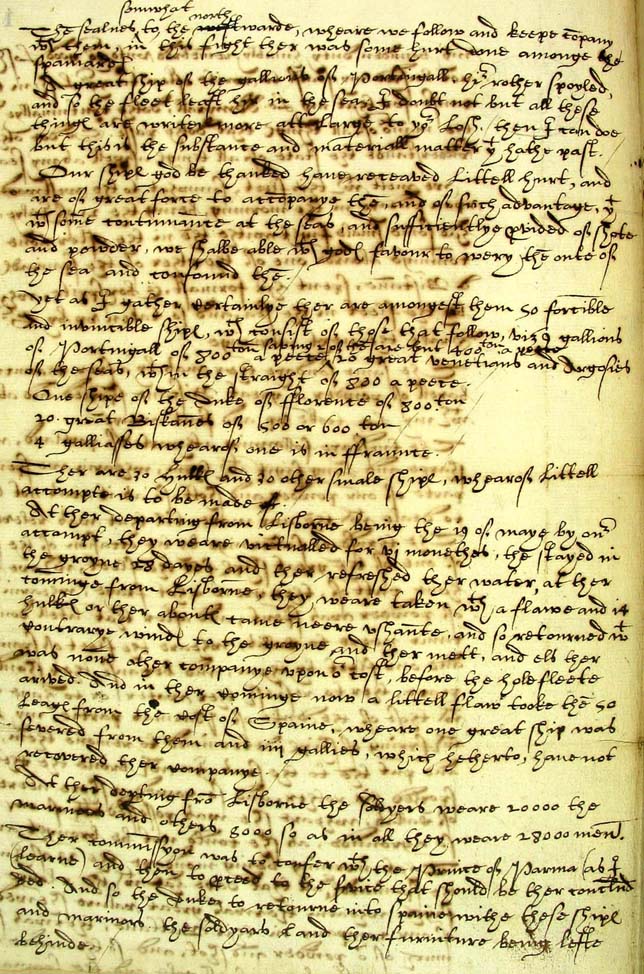 The[m] sealves som what to the northwarde, wheare we follow and keepe co[m]panie w[i]th them, in this fight ther was some hurt done amonge the spaniards.

A great ship of the gallions of Portingall, his rother spoyled, and so the fleet leaft hir in the sea. I doubt not but all these things are writen more att large to yo[u]r Lo[rd] sh[ip] then I can doe but this is the substance and materiall matter th[a]t hathe past.

Our ships god be thanked have receaved littell hurt, and are of great force to acco[m]payne the[m], and of such advantage, th[at] w[i]th some continuance at the seas, and sufficientlye p[ro]vided of shote and powder, we shalbe able w[i]th gods favour to wery the[m] oute of the sea and confound the[m].

28 000 men left Lisbon, which included 20 000 soldiers and 8000 sailors and other men. Their orders were to join up with the Prince of Parma [I have found out] and then carry out their mission [ie.to defeat England]. The Duke (Prince of Parma) was supposed to return to Spain leaving behind the ships, sailors, soldiers etc.

Yet as I gather Certainlye ther are arnongest them 50 forcible and invincible ships, w[hi]ch consist of those that follow, viz 9 gallions of Portingall of 800 ton a peece saving 2 of the[m] are but 400 ton a peece 20 great Venetians of the seas, w[i]thin the straight of 800 a peece. One shipe of the Duke of fflorence of 800 ton. 20 great Biskane[r]s of 500 or 600 ton. 4 galliasses whearof one is in ffraunce. Ther are 30 hulks and 30 other smale ships, wherof littell accompte is to be made. At ther departing from Lisborne being the 19 of maye by our accompt, they weare victualled for vj monethes, the[y] stayed in the groyne 28 dayes and ther refreshed ther water, at ther cominge from Lisborne, they weare taken w[i]th a flawe and 14 hulks or ther abouts cam neere ushante, and so retourned w[i]th Contrarye winds to the groyne and ther rnett, and els ther was none other compayne upon o[u]r cost, before the hole fleete arived. And in ther Cominge now a littell flaw tooke the[m] 50 leage from the Cost of Spaine, where one great ship was severed from them and iiij gallies, which hetherto, have not recovered ther Companye.

And ther dep[ar]ting fro[m] Lisborne the soldyers weare 20000 the mariners and others 8000 so as in all they weare 28000 men. Ther commissyon was to confer w[i]th the Prince of Parma (as I leame) and then to p[ro]ceed to the s[er]vice that should be ther conclud ed. And so the Duke to retoume into Spaine with those ships and mariners and soldyars &c and ther furniture being lefte behinde.

The [Spanish] fleet was sailing northwards, and we followed them closely, and in the fight we did some damage to the Spaniards.

One of great Portuguese galleons with her rudder ruined had been left here in the sea by the fleet. I do not doubt that all these things have been described to your Lordship at length, much more than I can do, but this is the substance and material matter of what happened.

Our ships, God be thanked, received little damage, and are well manned and of such advantage that while still continuing at sea, and sufficiently provided with shot and gunpowder, we shall be able, with God’s favour, to surprise and defeat the Spanish.

28,000 men left Lisbon, which included 20,000 soldiers and 8,000 sailors and other men. Their orders were to join up with the Prince of Parma [I have found out] and then carry out their mission [ie.to defeat England]. The Duke (Prince of Parma) was supposed to return to Spain leaving behind the ships, sailors, soldiers etc.

One ship with the Duke of Florence at 800 tonnes. There are 20 great ships of Biscay of 500 or 600 tonnes. 4 galleasses [military ships] of which one is in France. There are 30 hulks and 30 other small ships, about which there is little to say.

On their departure from Lisbon on 19 May by our understanding, they were supplied with enough food for 6 months. They stayed in the Groyne (Port of Coruna) for 28 days and there refreshed their water. On coming from Lisbon, they were taken with a flaw [a sudden brief burst of wind] and 14 hulks or there about, came near Ushant [an island of northwest France in the Atlantic Ocean off western Brittany], and so returned against the winds to the Groyne and remained there, and there was no other company on our coastline, before the whole fleet arrived. When they came, a little flaw took them 50 leagues from the Coast of Spain, where one great ship was cut off from them and four galleons, which hitherto have not re-joined their fleet.

From Lisbon, 20,000 soldiers departed with the mariners and 8,000 others, so all in all they were 28,000 men. Their commission [plan] was to confer with the Prince of Parma (I learnt) and then to proceed to the service that was agreed. And so the Duke returned to Spain with those ships and mariners and soldiers etc. and they left their furniture [the equipment necessary for a ship] behind.

3. The dates mentioned in this account are based on an old calendar which is slightly different from the one we use now. These events took place at the end of July and first week of August according to our calendar.