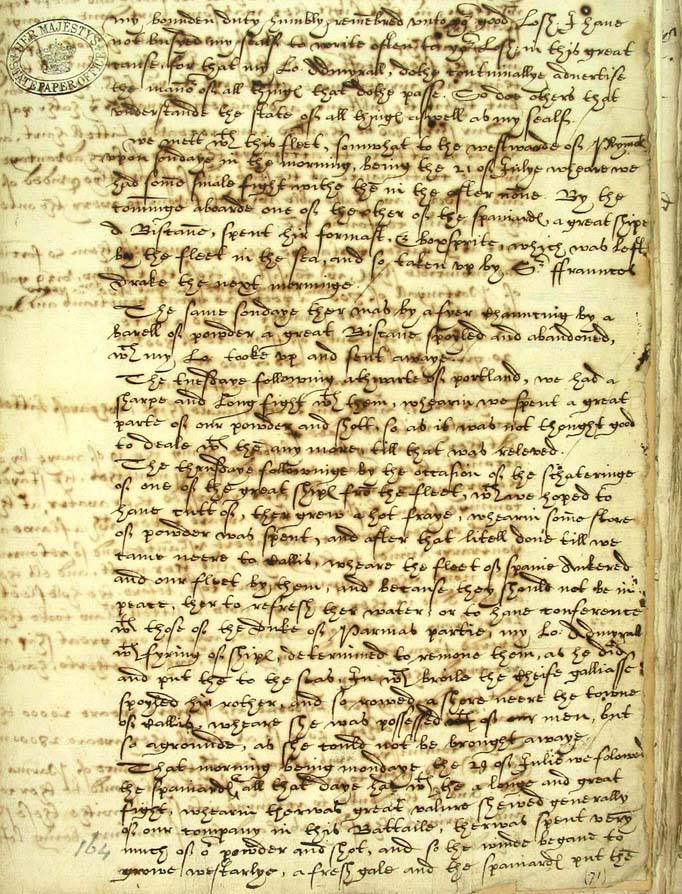 we mett w[i]th this fleet, somewhat to the westwarde of Plymouth upon sondaye in the morning, being the 21 of Julye wheare we had some smale fight withe the[m] in the after none. By the cominge aboarde one of the other of the spaniards, a great shipe a Biscane[r], spent hir formast, & boxsprite, which was left by the fleet in the sea, and so taken up by S[i]r ffrauncis Drake the next morninge.

The same sondaye ther was by a fyer Chauncing by a barell of powder a great Biscane spoyled and abandoned, w[hi]ch my Lo[rd] tooke up and sent awaye.

The tuesday following athwarte of portland, we had a sharpe and long fight w[i]th them, wherein we spent a great parte of our powder and shott, so as it was not thought good to deale w[i]th the[m] any more, till that was releved.

The thrusdaye followinge by the occasion of the schateringe of one of the great ships fro[m] the fleet, w[hi]ch we hoped to have cutt of, ther grew a hot fraye, wherein some store of powder was spent, and after that liteII done till we came neere to Caliis, wheare the fleet of spaine Ankered and our fleet by them, and because they should not be in peace, ther to refresh ther water, or to have conference w[i]th those of the Duke of Parmas partie, my Lo[rd] Admyrall w[i]th fyring of ships, determined to remove them, as he did, and put the[m] to the seas, In w[hi]ch broile the Cheife galliasse spoyled hir rother, and so rowed ashore neere the towne of Callis, wheare she was possessed w[i]th of our men, but so agrounde, as she could not be brought awaye.

That morning being mondaye the 29 of Julie we folowed the spaniards & all that daye had w[i]th the[m] a longe and great figtht, wherein ther was great valure shewed generally of our company in this Battaile, ther was spent very much of o[u]r powder and shot, and so the winde begane to growe westarlye, a fresh gale and the Spaniards put the[m]

My humble duty be remembered to your good Lordship.  I have not busied myself to write often to your Lordship on this great matter, as my Lord Admiral continues to give news of how things are going. So do others that understand the state of all things as well as myself.

We met with this fleet, somewhat to the west of Plymouth on Sunday morning, 21st July, where we had a small fight with them in the afternoon. When coming across one of the other of the Spaniards, a great ship, from Biscay broke her foremast, [the mast nearest the bow of a ship] and bowsprit, [a pole or spar extended diagonally upward from a mast to the topmost corner of sail, serving to extend the sail] which was left by the fleet in the sea, and captured by Sir Francis Drake the next morning.

The same Sunday, a great Biscayner ship was wrecked and abandoned by a fire started by chance by a barrel of powder, which my Lord sent away.

On Tuesday, at the other side of Portland, we had a sharp and long fight with them [the Spanish], during which we used most of our powder and shot, so we thought it would not be good to fight with them anymore, until we had more supplies.

The following Thursday, because of the scattering of one of the great ships from the fleet, which we hoped to have cut off, there developed a hot battle wherein some store of powder was used up, and after that little was done until we came near to Calais where the fleet of Spain had anchored with our fleet by them. As we did not want them to rest or to get fresh water or make contact with the Duke of Parma’s party, my Lord Admiral sent in fire ships determined to remove them, and put them to sea, in which skirmish the chief galleass ruined her rudder and so rowed ashore near the town of Calais, where she was claimed by our men, but she was grounded so she could not be towed away.

That morning being Monday, 29 July, we followed the Spaniards and all that day had with them a long and great fight. There was great bravery shown generally by our company in this battle. We used a lot of our powder and shot, and so the wind began to grow westerly with a fresh gale and the Spaniards put them …

3. The dates mentioned in this account are based on an old calendar which is slightly different from the one we use now. These events took place at the end of July and first week of August according to our calendar.