Lord Howard of Effingham, the Admiral of the English fleet, sent this report to Francis Walsingham 21 July (SP 12/212) 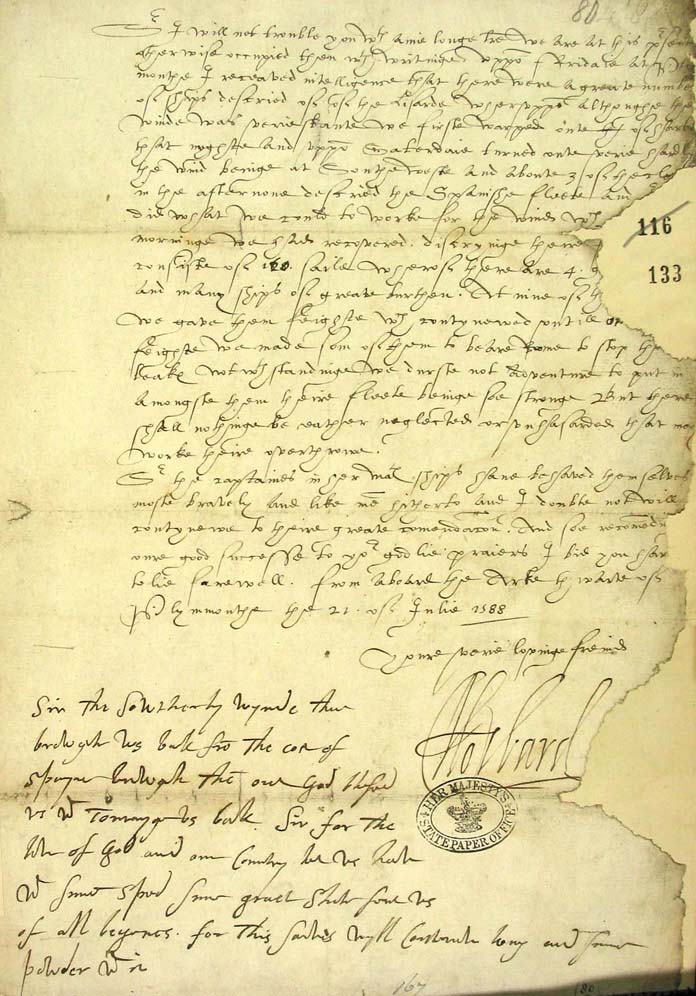 Sir The Southerly wynde That brought us bak fro[m] The cost of spayne brought The[m] out God blessed us w[ith] Torny[n]g us bak. Sir for The love of God and our Country let us have w[ith] some sped some graet Shot sent us of all begnes. For This sarvis wyll Contynue long and some powder w[ith]it.

Sir, I will not trouble you with any long letter. We are otherwise occupied to be writing at present. On Friday, at Plymouth I received intelligence [news] that there were a great number of ships observed off the coast of the Lizard and, although the wind was very light, we first moved out of the harbour that night. On Saturday we hardly turned as the wind was from the South West and about 3 o’ clock in the afternoon observed the Spanish fleet and did what we could to set sail as we had recovered the wind in the morning. Describing their fleet [the Spanish] it consisted of 120 [ships] of which there were 4 galleasses and many ships of great weight. At nine o’ clock we gave them chase which continued until one, and then we permitted some of them time to plug their leaks. Notwithstanding this, we did not dare to sail amongst them as their fleet was so strong. But we neglected nothing and risked everything to try and defeat them.

Sir, the captains in her Majesty’s ships have acted so bravely and no other men before or since could be so rightly praised. And so, recommending our successes to your godly prayers, I bid you heartily farewell, from aboard the Ark, in Plymouth the 21 of July 1588. Your loving friend

Sir, The southerly wind that brought us back from the coast of Spain, brought them out. God blessed us by turning us back. Sir, for the love of God and our country let us have with some speed some shot [ammunition] sent to us of all sizes. For this will continue for a long time, and send some gunpowder with it

2. This is a report from Lord Howard of Effingham, the Admiral of the English fleet.