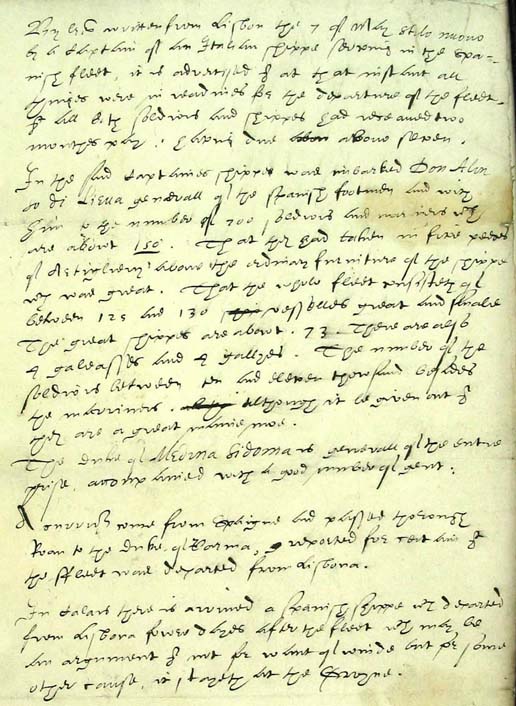 By l[ett]res written from Lisbon the 7 of May stilo nuovo by a Captain of an Italian shippe serving in the Spa-nish fleet, it is advertised th[at] at that instant all thinges were in readiness for the departure of the fleet th[at] all both soldiers and shippes had receaved two monthes pay, having due above seven.

In the said Captaines shippe were imbarked Don Alonso di Lieva generall of the Spanish footmen and with him to the number of 700 soldiors and mariners w[h]ich areabout 150. That they had taken in five peeces of Artigliery above the ordinary furniture of the shippe w[h]ich were great. That the whole fleet consisteth of between 125 and 130 vesselles great and small. The great shippes are about 73. There are also 4 galeasses and 4 gallyes. The number of the soldiors between ten and eleven thowsand besides the marriners. although it be given out that they are a great manie more.

The Duke of Medina Sidonia is generall of the entire prise, accompanied with a good number of gent[lemen].

A curri[e]r come from Spaigne and passed thorough Roan to the Duke of Parma, reported for certain th[at] the fleet were departed from Lisbona.

In Calais there is arrived a Spanish Shippe w[hi]ch departed from Lisbona fower dayes after the fleet w[hi]ch may be an argument th[at] not want of winde but for some other cause it stayeth at the Groyne.

Letters from Lisbon on 7 May written by a Captain of an Italian ship serving in the Spanish fleet, give the news that all preparations for the departure of the fleet had been made, that soldiers and sailors have received two months’ pay, out of the seven due.

On this Captain’s ship was Don Alonso di Lieva [Leiva] General of the Spanish footmen and with him 700 soldiers and about 150 sailors. They had also taken on board five pieces of artillery, more than usual for the ship, which were large. The fleet consisted of between 125 and 130 vessels great and small. There are about 73 great ships. There are also 4 galleasses [fighting ships with three masts] and 4 galleys [ships propelled mainly by oars but with sails]. The total number of the soldiers on board is between ten and eleven thousand, as well as sailors. Although, it was said that they are a great many more.

The Duke of Medina Sidonia is General of the entire fleet, accompanied by a good number of gentlemen.

A messenger from Spain who had passed through Rome to the Duke of Parma reported for certain that the fleet was to depart from Lisbon.

In Calais, a Spanish ship arrived that had departed from Lisbon four days after the fleet, which suggests that it stayed at the Groyne [the port, Coruna] perhaps not due to lack of wind, but for some other reason.

1. This is an extract from a letter to the English government which gives details about the progress of the Armada.