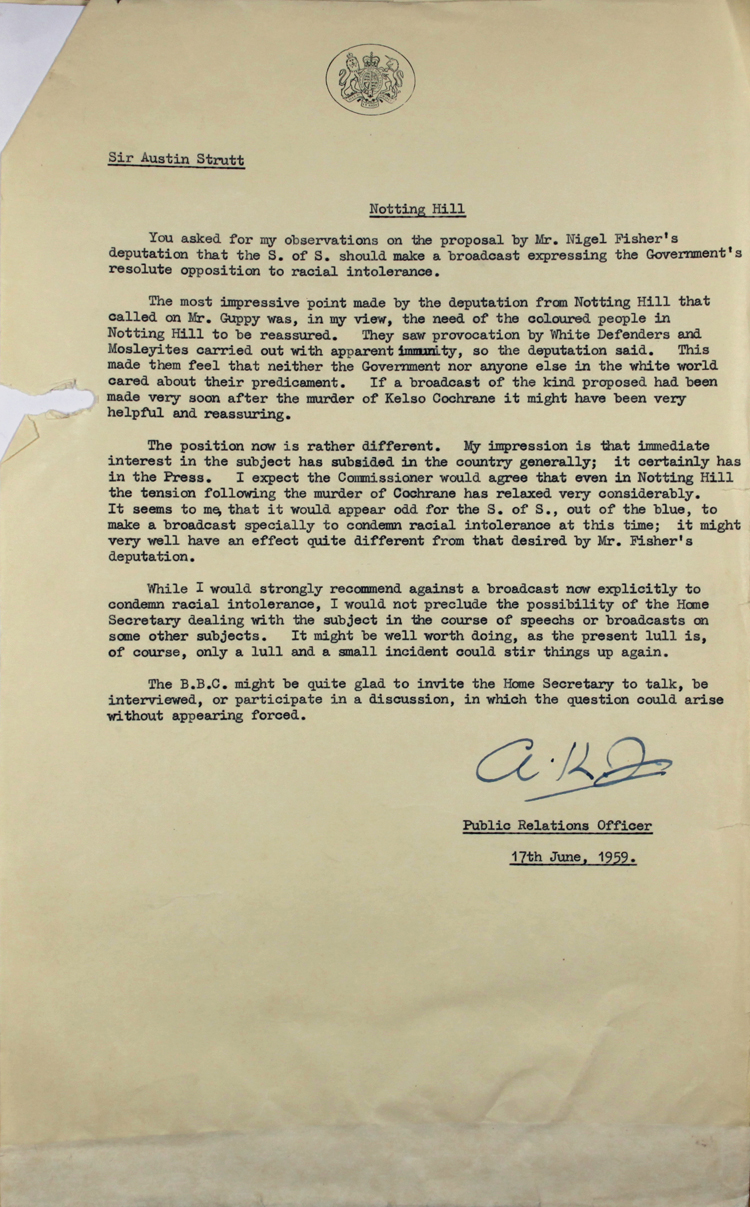 You asked for my observations on the proposal by Mr. Nigel Fisher’s deputation that the S. of S. [Secretary of State] should make a broadcast expressing the Government’s resolute opposition to racial intolerance.

The most impressive point made by the deputation from Notting Hill that called on Mr. Guppy was, in my view, the need of the coloured people in Notting Hill to be reassured. They saw provocation by White Defenders and Moselyites carried out with apparent immunity, so the deputation said. This made them feel that neither the Government nor anyone else in the white world cared about their predicament. If a broadcast of the kind proposed had been made very soon after the murder of Kelso Cochrane it might have been very helpful and reassuring.

The position now is very different. My impression is that immediate interest in the subject has subsided in the country generally; it certainly has in the press. I expect the Commissioner would agree that even in Notting Hill the tension following the murder of Cochrane has relaxed very considerably. It seems to me that it would appear odd for the S. of S., out of the blue, to make a broadcast specially to condemn racial intolerance at this time; it might very well have an effect quite different from that desired by Mr. Fisher’s deputation.

While I would strongly recommend against a broadcast now explicitly to condemn racial intolerance, I would not preclude the possibility of the Home Secretary dealing with the subject in the course of speechs or broadcasts on some other subjects. It might be well worth doing, as the present lull is, of course, only a lull and a small incident could stir things up again.

The B.B.C. might be quite glad to invite the Home Secretary to talk, be interviewed, or participate in a discussion, in which the question could arise without appearing forced.