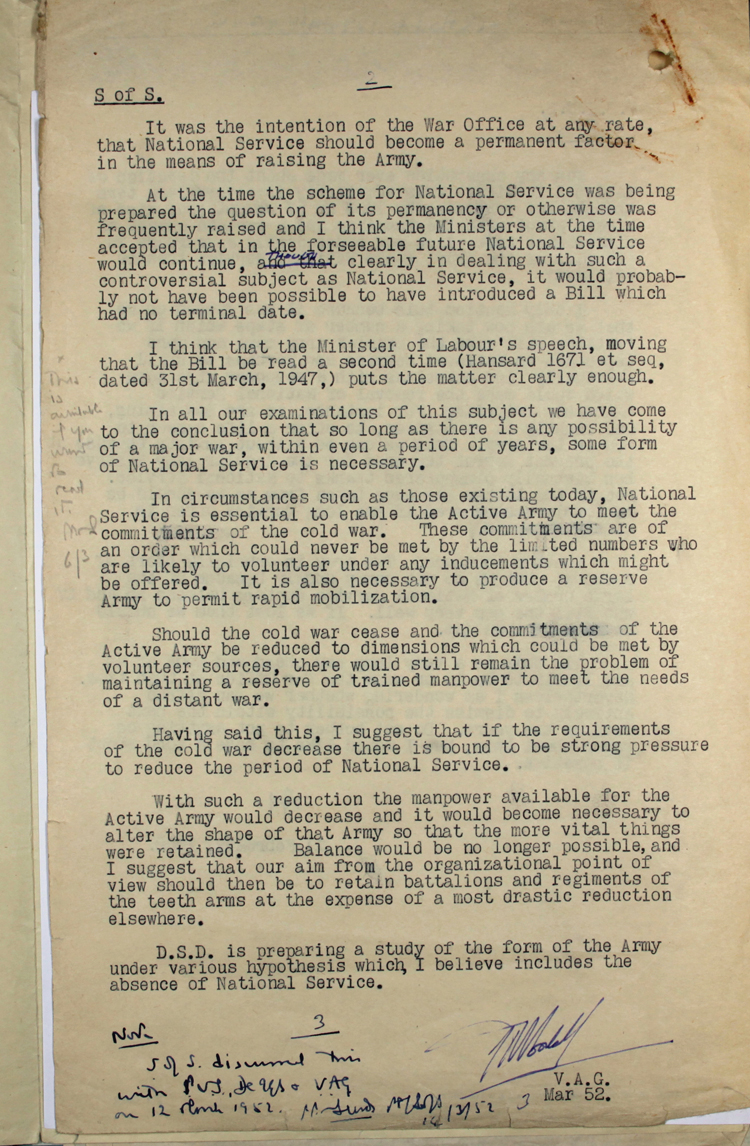 Memo to the Secretary of State for War from Alexander Douglas Campbell, Vice Adjutant General, March 1952 (WO 32/16146)

It was the intentions of the War Office at any rate, that National Service should become a permanent factor in the means of raising the Army.

At the time the scheme for National Service was being prepared the question of its permanency or otherwise was frequently raised and I think the Ministers at the time accepted that in the foreseeable future National Service would continue, though clearly in dealing with such a controversial subject as National Service, it would probably not have been possible to have introduced a Bill which had no terminal date.

I think that the Minister of Labour’s speech, moving that the Bill be read a second time (Hansard 1671 et seq, dated 31st March, 1947,) puts the matter clearly enough.

In all our examinations of this subject we come to the conclusion that sol long as there is any possibility of a major war, within even a period of years, some form of National Service is necessary.

In circumstances such as those existing today, National Service is essential to enable the Active Army to meet the commitments of the cold war. These commitments are of an order which could never be met by the limited numbers who are likely to volunteer under any inducements which might be offered. It is also necessary to produce a reserve Army to permit rapid mobilization.

Should the cold war cease and the commitments of the Active Army be reduced to dimensions which could be met by volunteer services, there would still remain the problem of maintaining a reserve of trained manpower to meet the needs of a distant war.

Having said this, I suggest that if the requirements of the cold war decrease there is bound to be strong pressure to reduce the period of National Service.

With such a reduction the manpower available for the Active Army would decrease and it would become necessary to alter the shape of that Army so that the more vital things were retained. Balance would be no longer possible, and I suggest that our aim from the organizational point of view should then be to retain battalions and regiments of the teeth arms [fighting troops] at the expense of a most drastic reduction elsewhere.

D.S.D. is preparing a study of the form of the Army under various hypothesis which, I believe includes the absence of National Service.