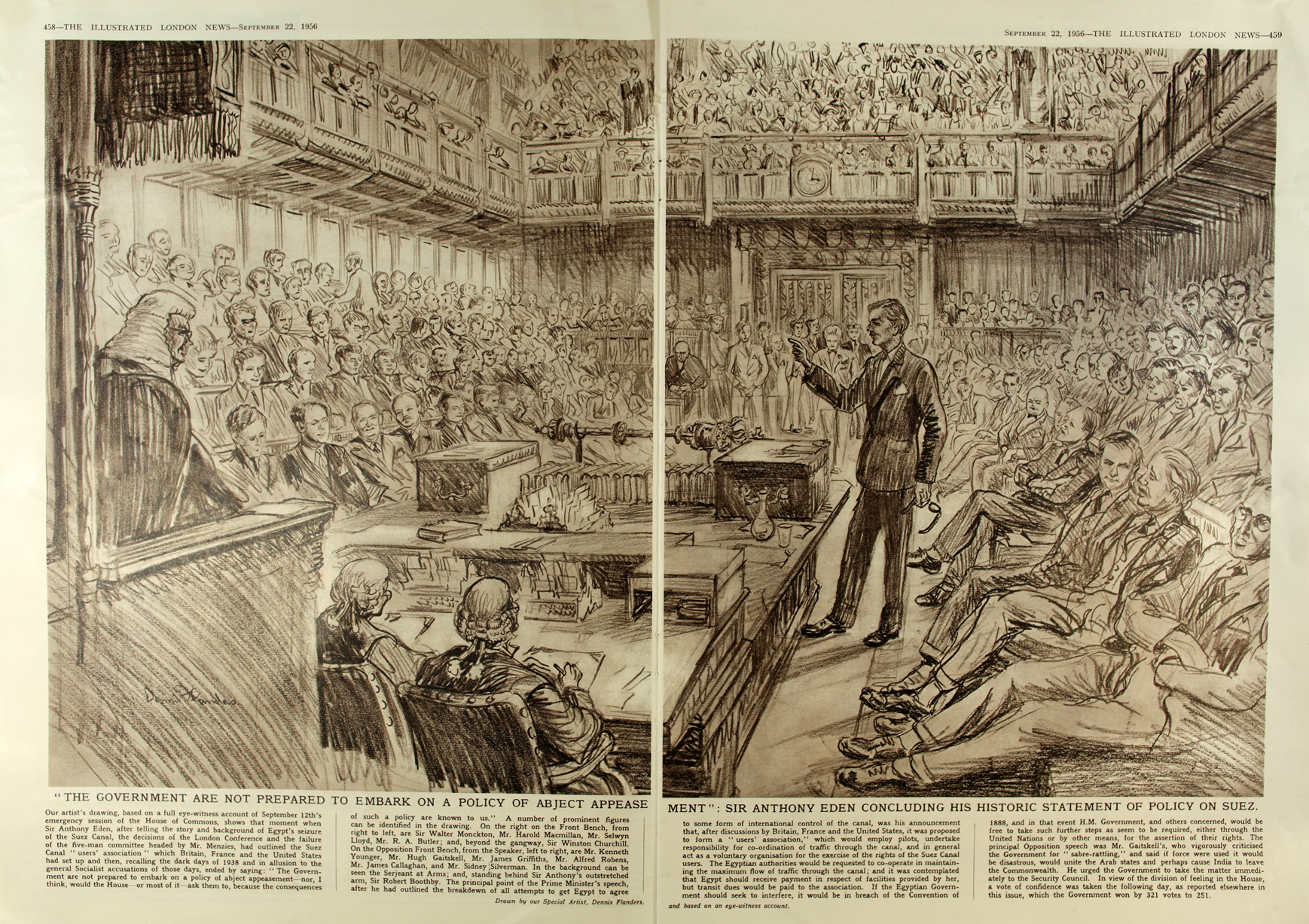 “THE GOVERNMENT ARE NOT PREPARED TO EMBARK ON A POLICY OF ABJECT APPEASEMENT”: SIR ANTHONY EDEN CONCLUDING HIS HISTORIC STATEMENT OF POLICY ON SUEZ.

Our artist’s drawing, based on a full eye-witness account of September 12th’s emergency session of the House of Commons, shows that moment when Sir Anthony Eden, after telling the story and background of Egypt’s seizure of the Suez Canal, the decisions of the London Conference and the failure of the five-man committee headed by Mr. Menzies, had outlined the Suez Canal “users’ association” which Britain, France and the United States had set up and then, recalling the dark days of 1938 and in the allusion to the general Socialist accusations of those days, ended saying: ” The Government are not prepared to embark on a policy of abject appeasement—

Nor, I think, would the House—or most of it—ask them to, because the consequences of such a policy are known to us.”

A number of prominent figures can be identified in the drawing. On the right on the Front Bench, from right to left, are Sir Walter Monckton, Mr. Harold Macmillan, Mr. Selwyn Lloyd, Mr. R. A. Butler; and, beyond the gangway, Sir Winston Churchill. On the opposition Front Bench, from the Speaker, left to right, are Mr. Kenneth Younger, Mr. Hugh Gaitskell, Mr. James Griffiths, Mr. Alfred Robens, Mr James Callaghan, and Mr. Sidney Silverman. In the background can be seen the Serjeant at Arms; and, standing behind Sir Anthony’s outstretched arm, Sir Robert Boothby.

The principal point of the Prime Minister’s speech, after he had outlined the breakdown of all attempts get Egypt to agree to some form of international control of the canal, was his announcement that, after discussions by Britain, France and the United States, it was proposed to form a “users’ association,” which would employ pilots, undertake responsibility for co-ordination of traffic through the canal, and in general act as a voluntary organisation for the exercise of the rights of the Suez Canal users. The Egyptian authorities would be requested to co-operate in maintaining the maximum flow of traffic through the canal; and it was contemplated that Egypt should receive payment in respect of facilities provided by her, but transit dues would be paid to the association.

If the Egyptian Government should seek to interfere, it would be in breach of the Convention of 1888, and in that event H.M. Government, and others concerned, would be free to take such further steps as seem to be required, either through the United Nations or by other means, for the assertion of their rights. The principal Opposition speech was Mr. Gaitskell’s, who vigorously criticised the Government for “sabre-rattling,” and said if force were used it would be disastrous, would unite the Arab states and perhaps cause India to leave the Commonwealth. He urged the Government to take the matter immediately to the Security Council. In view of the division of feeling in the House, a vote of confidence was taken the following day, as reported elsewhere in this issue, which the Government won by 321 vote to 251.

Drawn by our Special Artist, Dennis Flanders, and based on an eye-witness account.