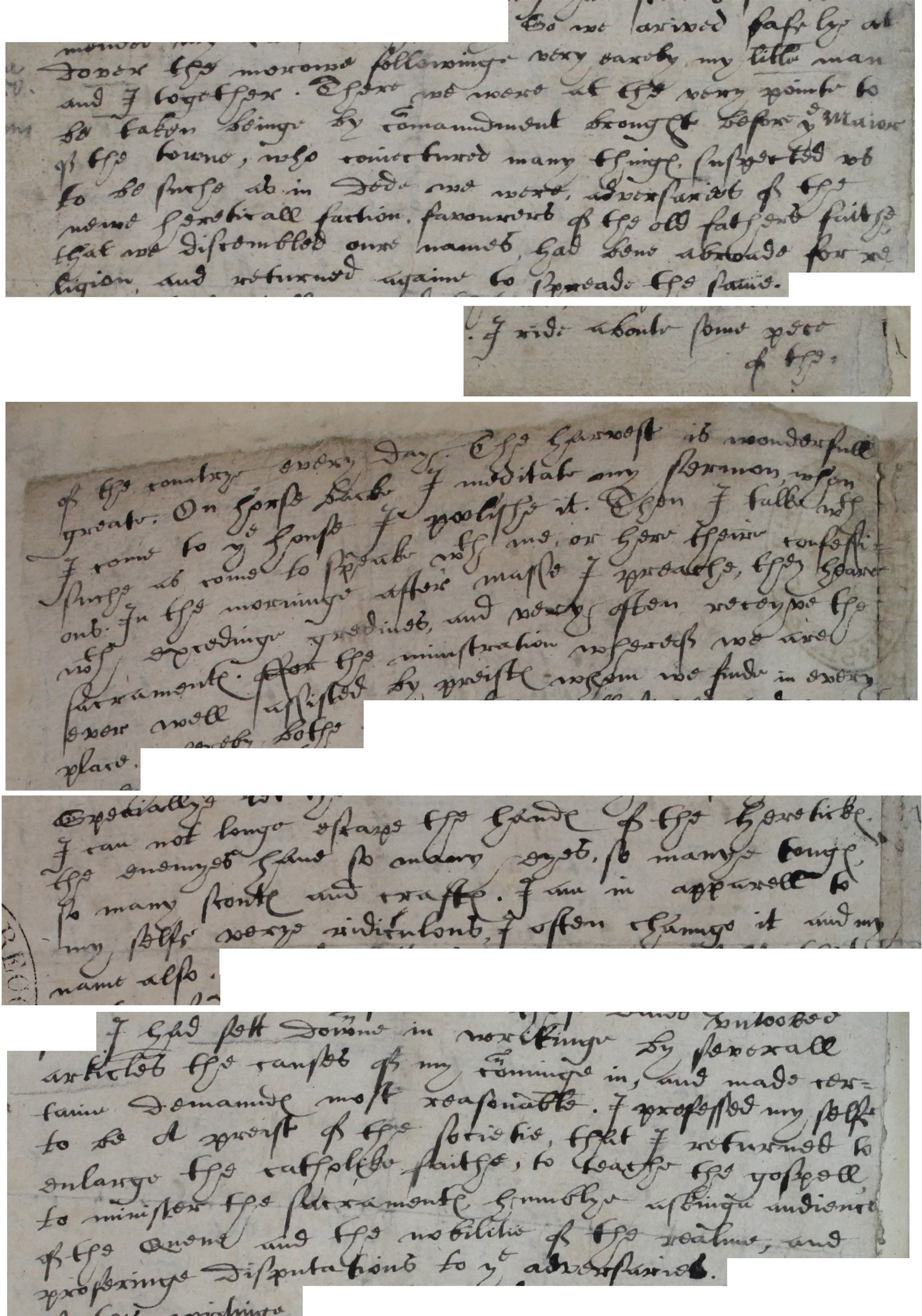 A substantial number of Elizabeth’s subjects still adhered to the Catholic faith. For the most part, they sustained their faith in private through spiritual reading, prayer and meditation, or the preservation of rosaries and relics. But from 1574 onwards, they had cause to hope that they might soon be able to worship more freely. From that year onwards, Elizabethan England experienced an influx of Roman Catholic missionaries from a seminary in Douai founded by William Allen, the former principal of St Mary Hall, Oxford. In June 1580, they were joined in England by the Jesuits, members of a dynamic religious order founded during the Reformation. One of the first to arrive was Edmund Campion, who had trained as a Roman Catholic priest in Dublin, Douai (in the Low Countries) and Prague. In this letter, which he may have written to his friend Allen, he describes what it was like for a Roman Catholic priest travelling in secret around England. Clearly he found many supporters, but he lived in fear of his life. The fact that this letter found its way into The National Archives suggests that the authorities were already aware of his activities. Campion was arrested at Wantage in July 1581. He was tortured, tried as a traitor and hanged.

So we arived safelye at Dover the morowe followinge very earely my little man and I together. There we were at the very pointe to be taken beinge by comaundment brought before ye Maior of the towne, who coniectured many thinges, suspected us to be suche as in dede we were, adversaries of the

newe hereticall faction, favourers of the old fathers faithe that we discembled oure names, had bene abroade for religion, and returned againe to spreade the same…

I ride aboute some pece of the country every day. The harvest is wonderfull

greate. On Horse backe I meditate any sermons, when I come to ye house I poolishe it. Then I talke with suche as come to speake with me, or hear theire confessions. In the morninge after masse I preache, they heare with excedinge gredines, and very often receyve the sacramentes. For the ministration whereof we are ever well assisted by preistes whom we finde in every place…

I can not longe escape the handes of the heretickes the enemyes have so many eyes, so many tonges, so many scoutes. I am in apparell to my selfe verye ridiculous, I often change it and my name also…

I had sett downe in writinge by severall articles the causes of my comminge in, and made certaine demaundes most reasonable. I professed my selfe

to be A preist of the societie, that I returned to enlarge the catholike faithe, to teache the gospell, to minister the sacramentes, humblye askinge audience

of the Quene and the nobilitie of the realme, and proferinge disputations to ye adversaries.