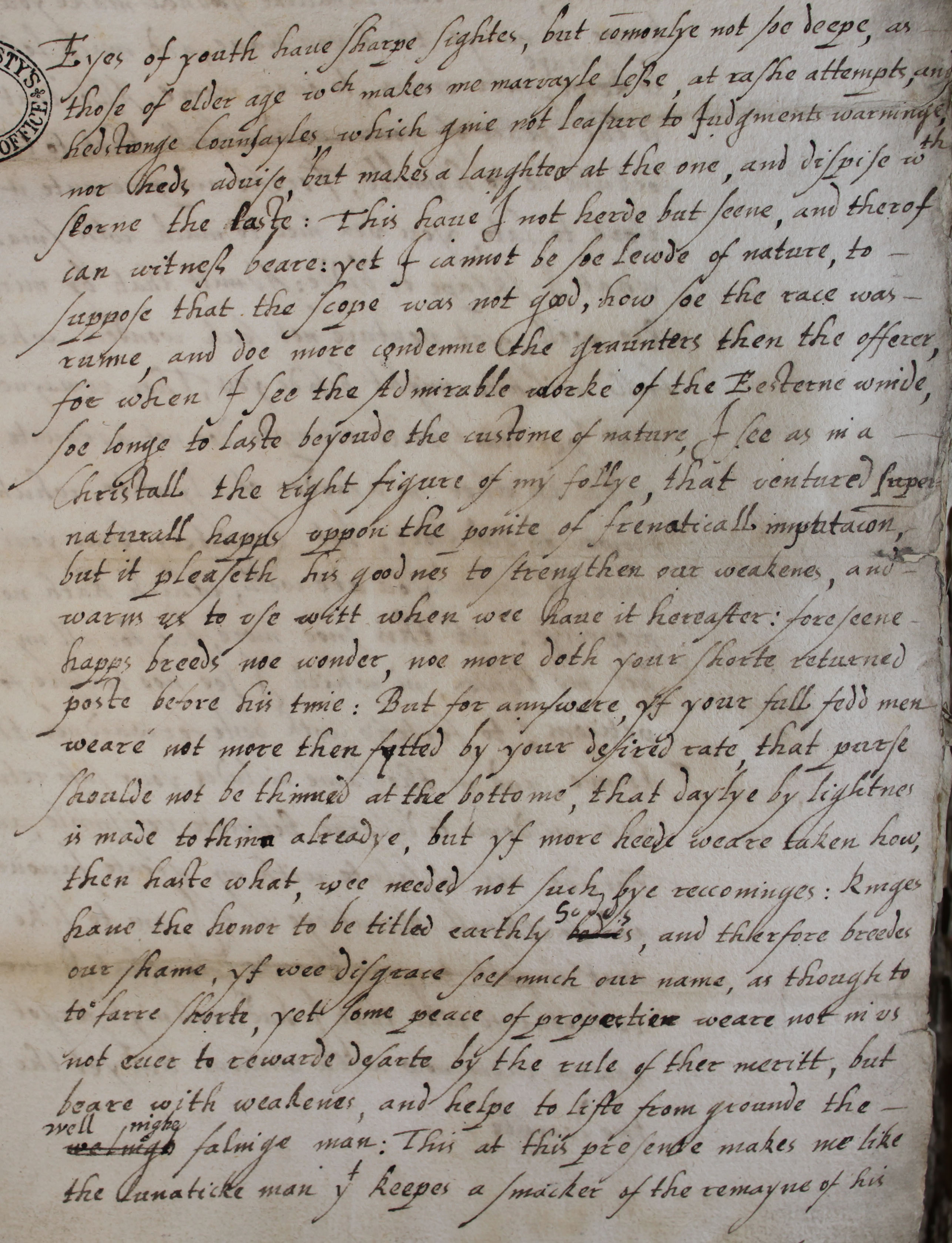 In the summer of 1597, Essex led an expedition to the Azores, with Thomas Howard, Earl of Suffolk as Vice-Admiral and the celebrated adventurer Sir Walter Ralegh as Rear-Admiral. The purpose was to capture the gold and silver Spanish fleet of bullion returning from America at the bay of Angra in the Portuguese Azores Archipelago under King Phillipe’s rule. The English fleet was soon battered back by violent winds that inflicted considerable damage upon the ships. When she heard of this, Elizabeth wrote to advise Essex to proceed with caution. Her superior wisdom is evident in this letter to her impetuous young favourite, who was more than 30 years her junior. But Essex went on to defy his queen’s orders by pursuing the treasure fleet without first defeating the Spanish treasure fleet. His expedition, the last major naval campaign of Elizabeth’s reign, was an utter failure and he returned home in deep disgrace.

Eyes of youth have sharpe sightes, but commonlye not soe deepe, as those of elder age which makes me marvayle lesse, at rashe attempts, and hedstronge Counsayles, which give not leasure to Judgments warning, nor hede advise, but makes a laughter at the one, and dispise with scorne the laste: This have I not herde but seene, and therof can witness beare: yet I cannot be soe lwede of nature, to suppose that the scope was not good, how soe the race was runne, and doe more condemne the graunters then the offerer, for when I see the Admirable worke of the Easterne winde, soe longe to laste beyonde the custome of nature, I see as in a Christall the right figure of my follye, that ventured supernaturall happs uppon the pointe of frenaticall imputacion, but it pleaseth his goodness to strengthen our weakenes, and warns us to use witt when wee have it hereafter: foreseen happs breeds noe wonder, noe more doth your shorte returned poste before his time: But for aunswere, yf your full fedd men weare not more then fytted by your desired rate, that parse [purse] shoulde not be thinned at the bottome, that daylye by lightnes is made to thinn alreadye, but yf more heede weare taken how, then haste what, wee needed not such bye recconinges: Kinges have the honor to be titled earthly godds, and therfore breedes our shame, yf wee disgrace soe much our name, as though to to [too too] farre shorte, yet some peace of properties weare not in us not ever to rewarde desarte by the rule of ther merit, but beare with weakenes, and helpe to life from grounde the well nighe falinge [falling] man: This at this presente makes me like the lunaticke man that keepes a smacker [ie taste] of the remayne of his frenzies freake, helpt well therto by the influence of sol in leone [‘the sun in the lion’ – ie the constellation Leo, during the hottest part of the summer], that makes me yealde for Companye to a longer proporcion, then a wiser in my place woulde ever graunte unto, with this caveate, that this lunaticke goodnes make you not boulde to keepe to manye that you have, and much lesse take in more to heape more errors, to over manye, Allsoe that you truste not to the grace of your crazed [ie cracked] vessell, that to the ocean maye fortune to be to humble, Foresee and prevente it now in tyme, afore to late, you vex mee to much with smale regarde of what I skrape or bidde. Admitt that by miracle it woulde doe well, yet venture not such wonders where such approachfull mischife might betyde you, Ther remaynes that you after your perilous firste attempte doe not agravate that danger with an other in a farder of Clymate, which muste coste blowes of good sstore, let Caracters serve your turne, and be contente when you are well, which hath not ever bene your propertye: of this noe more, but for all my moodes, I forget not my Tenses [ie times – a pun upon moods and tenses in the grammatical sense], in which I see noe leasure for ought but peticions, to fortefie with beste forwardnes the wants of this Armye, and in the same include your safe returne, and graunte you wisdom to discerne betwixte verisimile [probably], and potest fieri [it can be done], Forget not to salute with my greate favoure good Thomas and faythfull Mountjoye [Sir Thomas Baskerville and Charles Blount, Lord Mountjoy, both of whom were serving under Essex]: I am to like the common faction that forgett to give thankes for what I receaved but I was soe loathe to take that I had wellnigh forgot to thank but receave them now with millions and yet the wrest [rest] keepes the deareste.