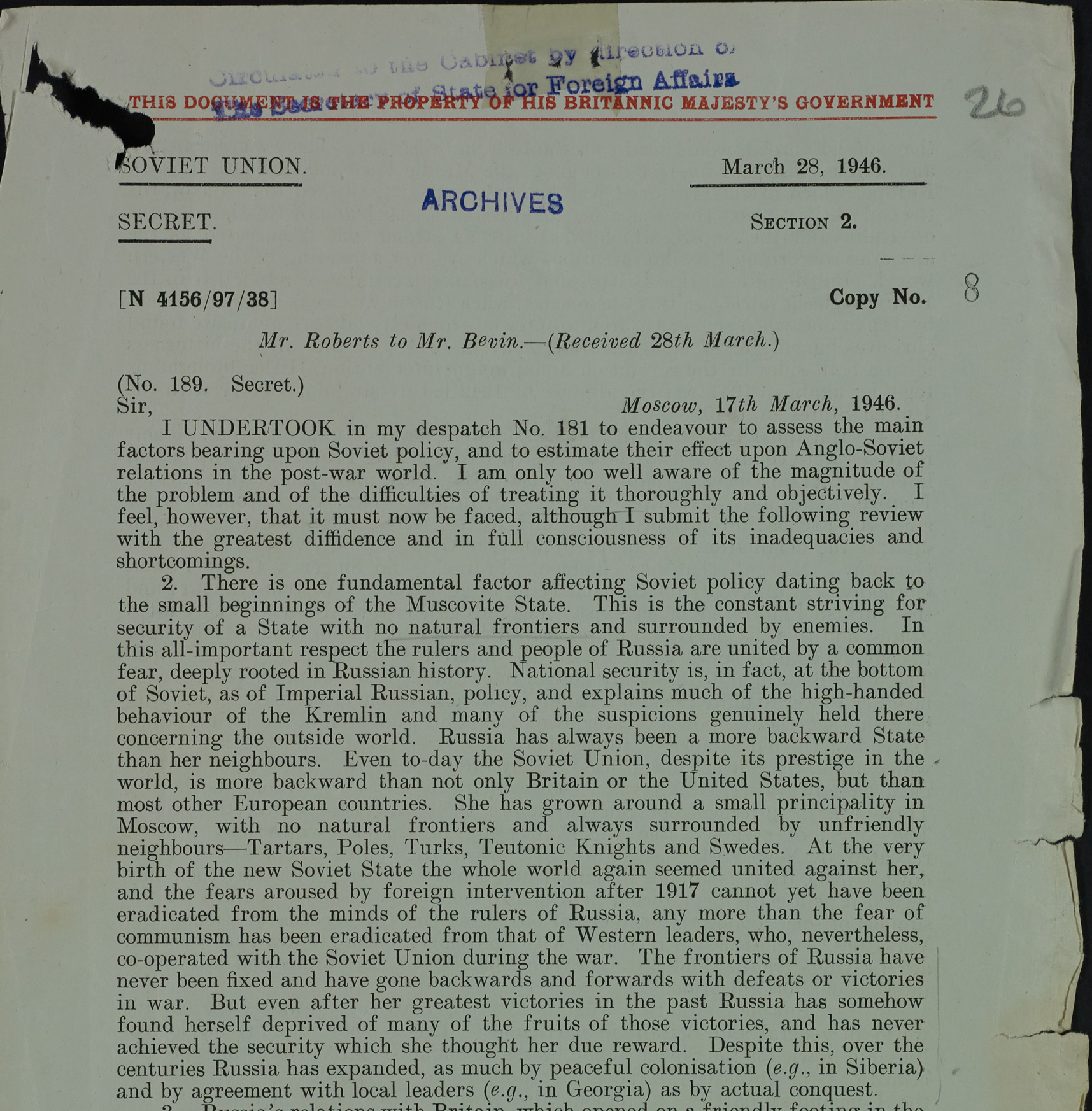 I UNDERTOOK in my despatch No.181 to endeavour to assess the main factors bearing upon Soviet policy, and to estimate their effect upon Anglo-Soviet relations in the post-war world. I am only too well aware of the magnitude of the problem and of the difficulties of treating it thoroughly and objectively. I feel, however, that it must now be faced, although I submit the following review with the greatest diffidence and in full consciousness of its inadequacies and shortcomings.

2. There is one fundamental factor affecting Soviet policy dating back to the small beginnings of the Muscovite State. This is the constant striving for security of a State with no natural frontiers and surrounded by enemies. In this all-important respect the rulers and people of Russia are united by a common fear deeply rooted in Russian history. National security is, in fact, at the bottom of Soviet, as of Imperial Russian, policy, and explains much of the high-handed behaviour of the Kremlin and many of the suspicions genuinely held there concerning the outside world. Russia has always been a more backward State than her neighbours. Even today the Soviet Union, despite its prestige in the world, is more backward than not only Britain or the United States, but than most other European countries. She has grown around a small principality in Moscow, with no natural frontiers and always surrounded by unfriendly neighbours-Tartars, Poles, Turks, Teutonic Knights and Swedes. At the very birth of the new Soviet State the whole world again seemed united against her, and fears aroused by foreign intervention after 1917 cannot yet have been eradicated from the minds of the rulers of Russia, any more than the fear of communism has been eradicated from that of the Western leaders, who, nevertheless, co-operated with the Soviet Union during the war. The frontiers of Russia have never been fixed and have backwards and forwards with defeats and victories in the war, But even after her greatest victories in the past Russia has somehow found herself deprived of many of the fruits of those victories, and has never achieved the security which she thought her due reward. Despite this, over the centuries Russia expanded, as much by peaceful colonisation (e.g. in Siberia) and by agreement with local leaders (e.g. in Georgia) as by actual conquest…