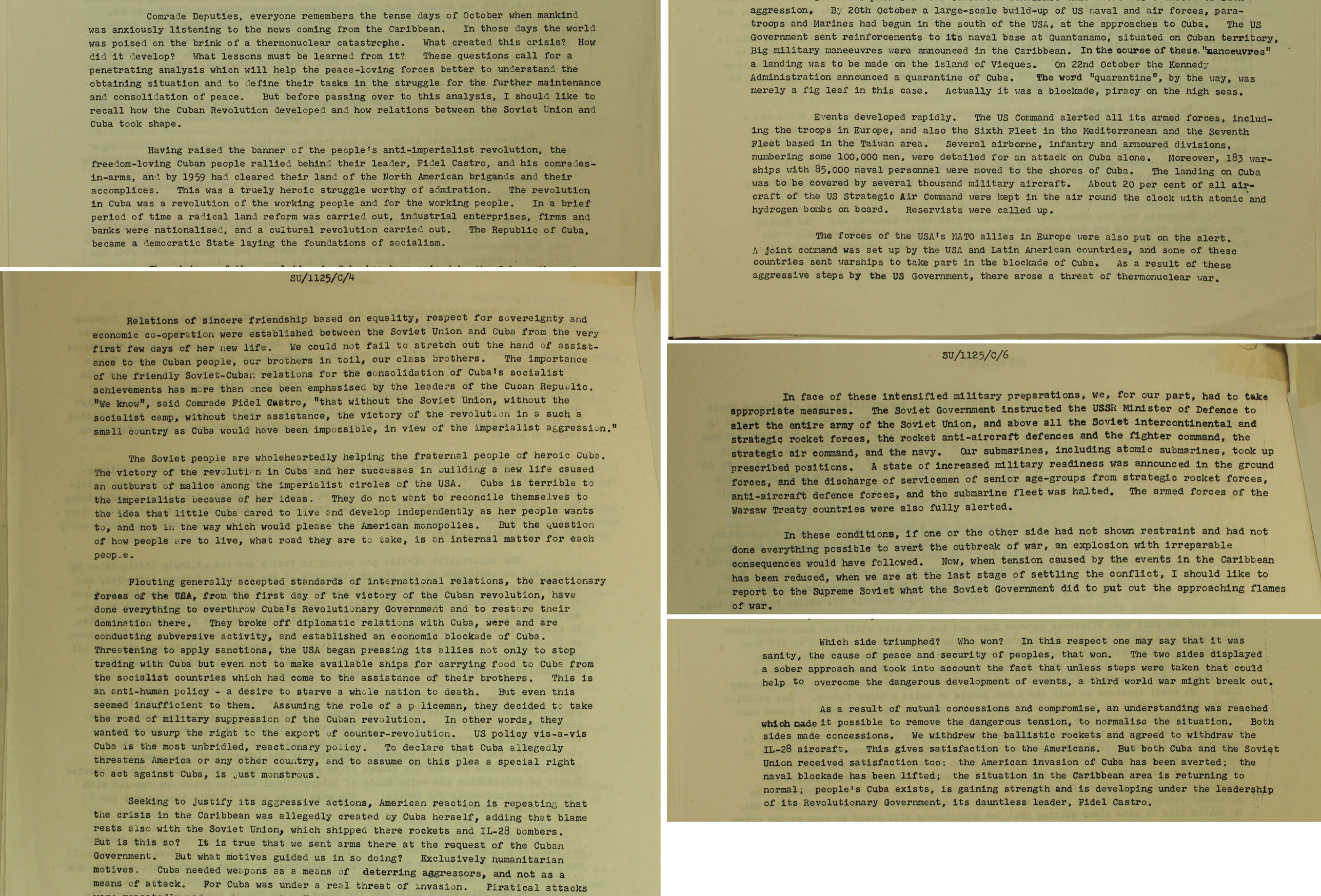 Speech by Soviet leader Khrushchev in December 1962 covering the causes and consequences of the Cuban Crisis. (Catalogue ref: FO 371/171934)

Comrade Deputies, everyone remembers the tense days of October when mankind was anxiously listening to the news coming from the Caribbean. In those days the world was poised on the brink of a thermonuclear catastrophe. What created this crisis? How did it develop? What lessons must be learned from it? These questions call for a penetrating analysis which will help the peace-loving forces better to understand the obtaining situation and to define their tasks in the struggle for the further maintenance and consolidation of peace. But before passing over this analysis, I should like to recall how the Cuban Revolution developed and how relations between the Soviet Union and Cuba took shape.

Having raised the banner of the people’s anti-imperialist revolution, the freedom loving Cuban people rallied behind their leader, Fidel Castro, and his comrades in arms, and by 1959 had cleared their land of the North American brigands and their accomplices. This was a truly heroic struggle worthy of admiration. The revolution in Cuba was a revolution of the working people and for the working people. In a brief period of the time a radical land reform was carried out, industrial enterprises, firms and banks were nationalised, and a cultural revolution carried out. The Republic of Cuba, became a democratic State laying the foundations of socialism.

Relations of sincere friendship based on equality, respect for sovereignty and economic co-operation were established between the Soviet Union and Cuba from the very first few days of her new life. We could not fail to stretch out the hand of assistance to the Cuban people, our brothers in toil, our class brothers. The importance of the friendly Soviet-Cuban relations for the consolidation of Cuba’s socialist achievements has more than once been emphasised by the leaders of the Cuban Republic. “We know”, said Comrade Fidel Castro, “that without the Soviet Union, without the socialist camp, without their assistance, the victory of the revolution in such a small country as Cuba would have been impossible, in the view of the imperialist aggression.”

The Soviet people are wholeheartedly helping the fraternal people of heroic Cuba. The victory of the revolution in Cuba and her successes in building a new life caused an outburst of malice among the imperialist circles of the USA. Cuba is terrible to the imperialists because of her ideas. They do not want to reconcile themselves to the idea that little Cuba dared to live and develop independently as her people wants to, and not in the way which would please the American monopolies. But the question of how people are to live, what road they are to take, is an internal matter for each people.

Flouting generally accepted standards of international relations, the reactionary forces of the USA, from the first day of the victory of the Cuban revolution, have done everything to overthrow Cuba’s Revolutionary Government and restore their domination there. They broke off diplomatic relations with Cuba, were and are conducting subversive activity, and established an economic blockade of Cuba. Threatening to apply sanctions, the USA began pressing its allies not only to stop trading with Cuba but even not to make available ships for carrying food to Cuba from socialist countries which had come to the assistance of their brothers. This is an anti-human policy- a desire to starve a whole nation to death. But even this seemed insufficient to them. Assuming the role of a policeman, they decided to take the road of military suppression of the Cuban Revolution. In other words, they wanted to usurp the right to the export of counter-revolution. US policy vis-à-vis Cuba is the most unbridles, reactionary policy. To declare that Cuba allegedly threaten America or any other country, and to assume on this plea a special right to act against Cuba, is just monstrous.

Seeking to justify its aggressive actions, American reaction is repeating that the crisis in the Caribbean was allegedly created by Cuba herself, adding that blame rests also with the Soviet Union, which shipped there rockets and IL-28 bombers. But is this so? It is true that we sent arms there at the request of the Cuban Government. But what motives guided us in so doing? Exclusively humanitarian motives. Cuba needed weapons as a means of deterring aggressors, and not as a means of attack. For Cuba was under a real threat of invasion.
…

Some people pretend that the rockets were supplied by us for an attack on the USA. This, of course, is not sensible reasoning. Why should we station rockets in Cuba for this purpose when we were and are able to strike from our own territory, possessing as we do the necessary number of intercontinental missiles of the required range and power?
…

By 20th October a large scale build up of US and naval air forces, para-troops and marines had begun in the South of the USA, at the approaches to Cuba. The US Government sent reinforcements to its naval base at Guantanamo, situated on Cuban territory. Big military manoeuvres were announced in the Caribbean. In the course of these “manoeuvres” a landing was to be made on the island of Vieques. On 22nd October the Kennedy Administration announced a quarantine of Cuba. The word ‘quarantine’ by the way, was merely a fig leaf in this case. Actually it was a blockade, piracy on the high seas.

Events developed rapidly. The US Command alerted all its armed forces, including the troops in Europe, and also the Sixth Fleet in the Mediterranean and the Seventh Fleet based in the Taiwan area. Several airborne, infantry and armoured divisions, numbering some 100,000 men were detailed for an attack on Cuba alone. Move over, 183 warships with 85,000 naval personnel were moved to the shores of Cuba. The landing on Cuba was to be covered by several thousand military aircraft. About 20 percent of all aircraft of the US strategic Air command were kept in the air round the clock with atomic and hydrogen bombs on board. Reservists were called up.

The forces of the USA’s NATO allies were also put on the alert. A joint command was set up by the USA and Latin American countries, and some of these countries sent warships to take part in the blockade of Cuba. As a result of these aggressive steps by the US Government there arose a threat of thermonuclear war.

In the face of these intensified military reparations we, for our part, had to take appropriate measures. The Soviet Government instructed the USSR Minister of Defence to alert the entire army of the Soviet Union, and above all the Soviet intercontinental and strategic rocket forces, the rocket anti-aircraft defences and the fighter command, the strategic air command and the navy. Our submarines, including atomic submarines, took up prescribed positions. A state of increased military readiness was announced in the ground forces, and the discharge of servicemen of senior age-groups from strategic rocket forces, anti-aircraft defence forces, and the submarine fleet has halted. The armed forces of the Warsaw Treaty countries were also fully alerted.

In these conditions, if one or the other side had not shown restraint and had not done everything possible to avert the outbreak of war, an explosion with irreparable consequences would have followed.  Now, when tension caused by the events in the Caribbean has been reduced, when we are at the last stage of settling the conflict, I should like to report to the Supreme Soviet what the Soviet Government did to put out the approaching flames of war.

Which side triumphed? Who won? In this respect one may say it was sanity, the cause of security and peoples that won. The two sides displayed a sober approach and took into account the fact that unless steps were taken that could help to overcome the dangerous development of events, a third world war might break out.

As a result of mutual concessions and compromise, an understanding was reached which made it possible to remove the dangerous tension, to normalise the situation. Both sides made concessions. We withdrew the ballistic rockets and agreed to withdraw the IL-28 aircraft. This gives satisfaction to the Americans. But both Cuba and the Soviet Union received satisfaction too: the American invasion of Cuba has been averted; the naval blockade has been lifted; the situation in the Caribbean area is returning to normal; people’s Cuba exists, is gaining strength and is developing under the leadership of its Revolutionary Government, its dauntless leader, Fidel Castro.