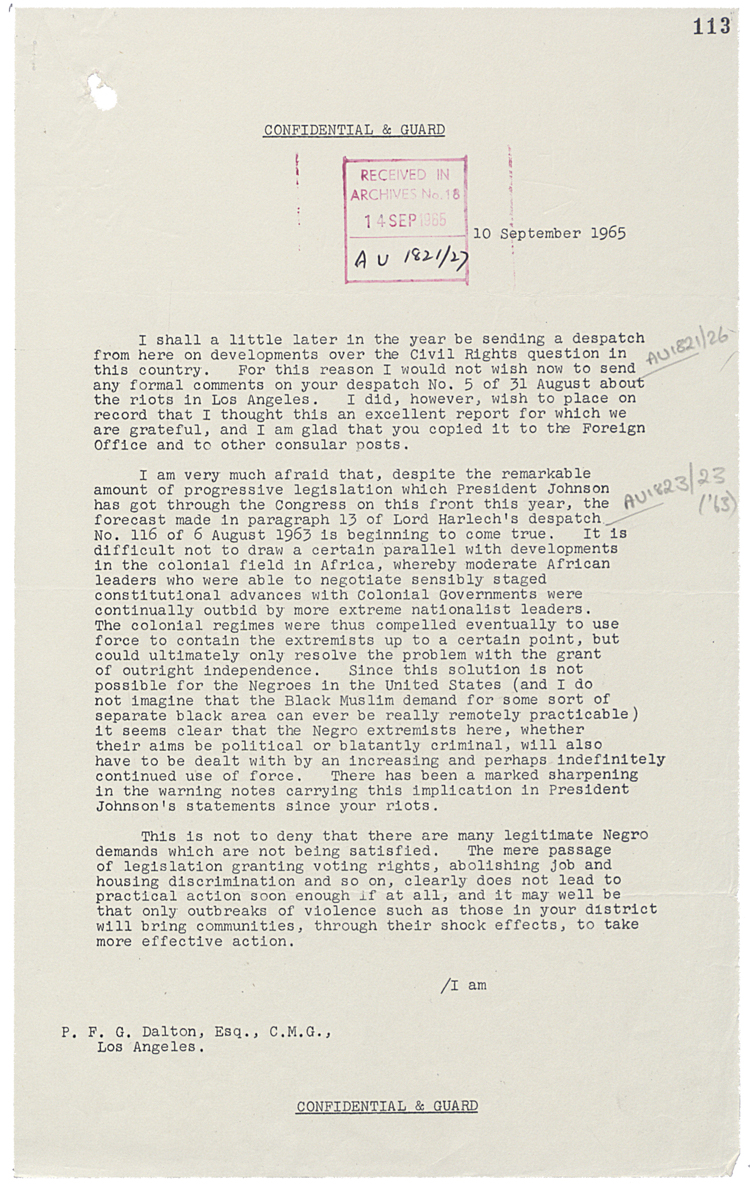 I shall a little later in the year be sending a despatch from here on developments over the Civil Rights question in this country. For this reason I would not wish now to send any formal comments on your despatch No.5 of 31 August about the riots in Los Angeles. I did, however, wish to place on record that I thought this an excellent report for which we are grateful, and I am glad that you copied it to the Foreign Office and to other consular posts.

I am very much afraid that, despite the remarkable amount of progressive legislation which President Johnson has got through the Congress on this front this year, the forecast made in paragraph 13 of Lord Harlech’s despatch No. 116 of 6 August 1963 is beginning to come true. It is difficult not to draw a certain parallel with developments in the colonial field in Africa, whereby moderate African leaders who were able to negotiate sensibly staged constitutional advances with Colonial Governments were continually outbid by more extreme nationalist leaders. The colonial regimes were thus compelled eventually to use force to contain the extremists up to a certain point, but could ultimately only resolve the problem with the grant of outright independence. Since this solution is not possible for the Negroes in the United States (and I do not imagine that the Black Muslim demand for some sort of separate black area can ever be really remotely practicable) it seems clear that the Negro extremists here, whether their aims be political or blatantly criminal, will also have to be dealt with by an increasing and perhaps indefinitely continued use of force. There has been a marked sharpening in the warning notes carrying this implication in President Johnson’s statements since your riots.

This is not to deny that there are many legitimate Negro demands which are not being satisfied. The mere passage of legislation granting voting rights, abolishing job and housing discrimination and so on, clearly does not lead to practical action soon enough if at all, and it may well be that only outbreaks of violence such as those in your district will bring communities, through their shock effects, to take more effective action.