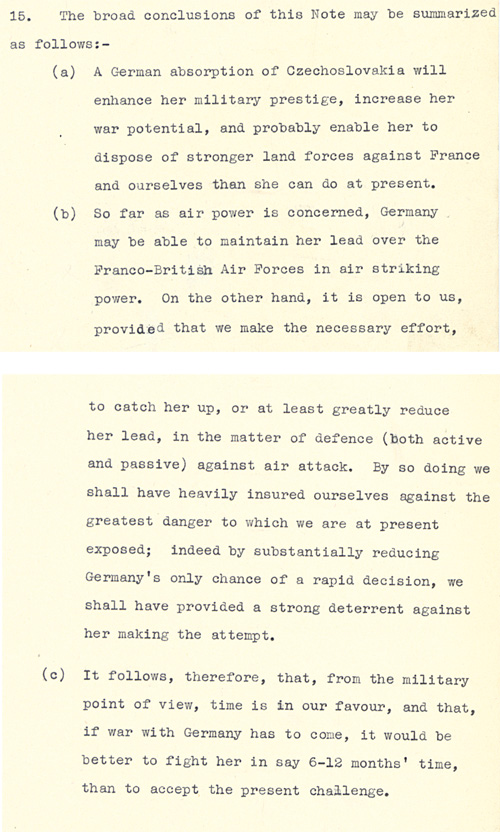 15.  The broad conclusions of this Note may be summarized as follows :-

(a) A German absorption of Czechoslovakia will enhance her military prestige, increase her war potential and probably enable her to dispose of stronger land forces against France and ourselves than she can do at present.

(b) So far as air power is concerned, Germany may be able to maintain her lead over the Franco-British Air Forces in air striking power.  On the other hand, it is open to us, provided that we make the necessary effort, to catch her up, or at least greatly reduce her lead, in the matter of defence (both active and passive) against air attack.  By so doing we shall have heavily insured ourselves against the greatest danger to which we are present exposed: indeed by substantially reducing Germany’s only chance of a rapid decision, we shall have provided a strong deterrent against her making the attempt.

(c) It follows, therefore, that, from the military point of view, time is in our favour, and that, if war with Germany has to come, it would be better to fight her in say 6-12 months’ time, than to accept the present challenge.

« Return to Chamberlain and Hitler 1938

3. This is the conclusion of a note from General Ismay to the British Cabinet sent on 20th September 1938, marked ‘Secret’. Ismay was Secretary of the Committee of Imperial Defence.