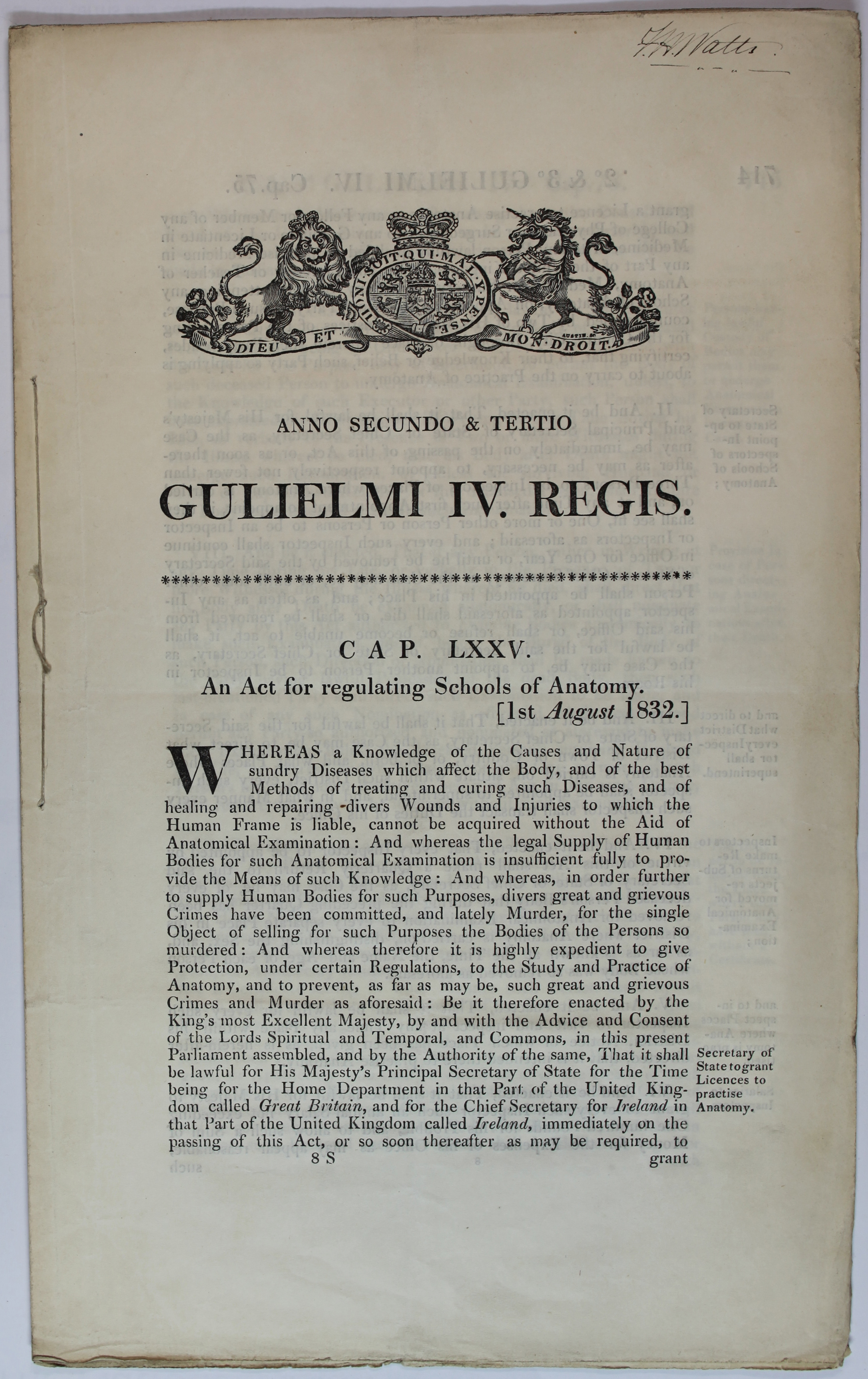 An Act for regulating Schools of Anatomy [1st August 1832]

I. Whereas a Knowledge of the Causes and Nature of sundry Diseases which affect the Body, and of the best Methods of treating and curing such Diseases, and of healing and repairing divers[e] Wounds and Injuries to which the Human Frame is liable, cannot be acquired without the Aid of Anatomical Examination: And whereas the legal Supply of Human Bodies for such Anatomical Examination is insufficient fully to provide the Means of such Knowledge: And whereas in order further to supply Human Bodies for such Purposes divers[e] great and grievous Crimes have been committed, and lately Murder, for the single Object of selling for such Purposes the Bodies of the Persons so murdered: And whereas therefore it is highly expedient to give Protection, under certain Regulations, to the Study and Practice of Anatomy and to prevent, as far as may be, such great and grievous Crimes and Murder as aforesaid; be it therefore enacted by the King’s most Excellent Majesty,[…] that is shall be lawful for His Majesty’s Principal Secretary of State for the time being for the Home Department […] to grant a Licence to practise Anatomy to any Fellow or Member of any College of Physicians or Surgeons, or to any Graduate or Licentiate in Medicine, or to any Person lawfully qualified to practice Medicine in any part of the United Kingdom, or to any Professor or Teacher of Anatomy, Medicine or Surgery or to any Student attending any School of Anatomy, on Application from such Party for such Purpose, countersigned by Two of His Majesty’s Justices of the Peace acting for the […] Place wherein such Party resides […]

IV. And be it enacted, That every Inspector to be appointed by virtue of this Act shall make Quarterly Return to the said Secretary of State […] of every deceased Person’s Body that during the preceding Quarter has been removed for Anatomical Examination […] distinguishing the Sex, and, as far as is known at the Time, the Name and Age of each Person […]

VII. […] it shall be lawful for any Executor or other Party having lawful Possession of the Body of any decease Person, not being an Undertaker or other Party intrusted with the Body for the Purpose only of Interment, to permit the Body of such deceased Person to undergo Anatomical Examination, unless […] such Person shall have expressed his Desire either in Writing at any Time during his life, or verbally in the Presence of Two or more Witnesses during the Illness whereof he died, that his Body after Death might not undergo such Examination […]

IX. […]in no Case shall the Body of any Person be removed for Anatomical Examination from any Place where such Person may have died until after Forty-eight Hours from the Time of such Person’s Decease, not until after Twenty-Four Hours Notice, to be reckoned from the Time of such decease, to the Inspector of the District, of the intended Removal of the Body[…] nor unless a Certificate stating in what Manner such Person came by his Death shall previously to the Removal of the Body have been signed by the Physician

Look at the Anatomy Act 1832. This document is written in legal language so can be quite difficult, try to separate it into blocks of information. The first page is pictured but there is more specific information from within the act in the transcript provided.