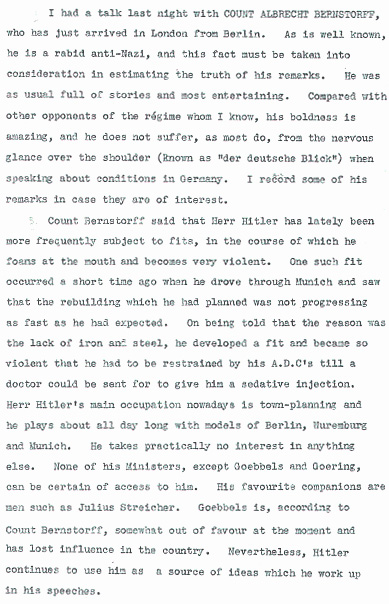 I had a talk last night with COUNT ALBRECHT BERNSTORFF, who has just arrived in London from Berlin.  As is well known, he is a rabid anti-Nazi, and this fact must be taken into consideration in estimating the truth of his remarks.  He was as usual full of stories and most entertaining.  Compared with other opponents of the regeme whom I know, his boldness is amazing, and he does not suffer, as most do, from the nervous glance over the shoulder (Known as “der deutsche Blick”) when speaking about conditions in Germany.  I record some of his remarks in case they are of interest.

Count Bernstorff said that Herr Hitler has lately been more frequently subject to fits, in the course of which he foams at the mouth and becomes very violent.  One such fit occurred a short time ago when he drove through Munich and saw that the rebuilding which he had planned was not progressing as fast as he had expected.  On being told that the reason was the lack of iron and steel, he developed a fit and became so violent that he had to be restrained by his A.D.C’s til a doctor could be sent for to give him a sedative injection.  Herr Hitler’s main occupation nowadays is town-planning and he plays about all day long with models of Berlin, Nuremburg and Munich.  He takes practically no interest in anything else.  None of his Ministers, except Goebbels and Goering, can be certain of access to him.  His favourite companions are men such as Julius Streicher.  Goebbels is, according to Count Bernstorff, somewhat out of favour at the moment and has lost his influence in the country.  Nevertheless, Hitler continues to use him as a source of ideas which he work up in his speeches.

Julius Streicher: Streicher was the founder and publisher of the newspaper Der Stürmer.

Goering: Hermann Göring, the commander of the Luftwaffe.

2. Read source 2. This is a report on a conversation with Count Bernstorff a German anti-Nazi campaigner.