How to look for records of... Wills of Royal Navy and Royal Marines personnel 1786-1882

These records are the original wills of warrant officers and ratings as well as Royal Marines other ranks. You can search and download the wills in series ADM 48 of around 20,000 men who joined the Royal Navy between 1786 and 1882.

Accident, disease and war were risks for seamen and many of them made wills to provide for their families in the event of death. As far back as 1698 the Admiralty had to deal with people impersonating deceased seamen or their executors, creditors or next of kin.

These forms were accepted as valid by the Admiralty and they were deposited in the Navy Office, with orders to issue cheques to the executors.

As a rule each man’s will begins with the printed words ‘In the Name of God, Amen’.

As well as being signed and dated by the testator, wills were usually signed by the master and captain of the ship that the seaman or warrant officer was serving on when the will was made.

These wills also hold details such as the name, address and occupation of the executor.

You can search the records in our catalogue (£), by using the search box below.

The wills are usually a printed form with details filled in by hand, although some have been written out in full. There might also be correspondence, such as the ‘Application of the Executor/Executrix’ and notes.

The first image is an early example and it shows the will of William Abrams, dated 1796 (the year he made his will). The will reveals that he had served in the Portsmouth Division of the Marines before joining HMS Pallas. He left everything to his mother, Mary Abrams. William Abrams signed his will but there was widespread illiteracy in England and Wales at this time so it’s not unusual to find ‘the mark of…X’ or ‘his X mark’ instead of a signature. 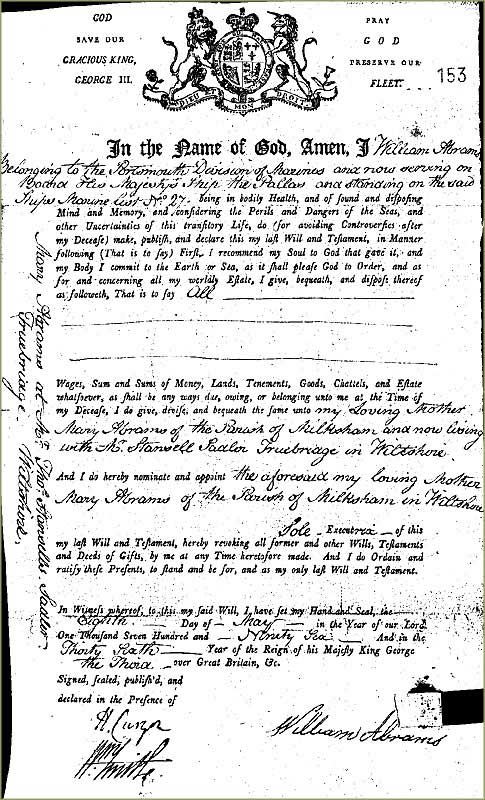 The second image is typical of later wills in this collection, the will of Henry Walker Thorp, chief engine room artificer on HMS Invincible. He made his will in 1880 leaving everything to his wife, Emily Thorp who was living in Portsmouth, Hampshire. 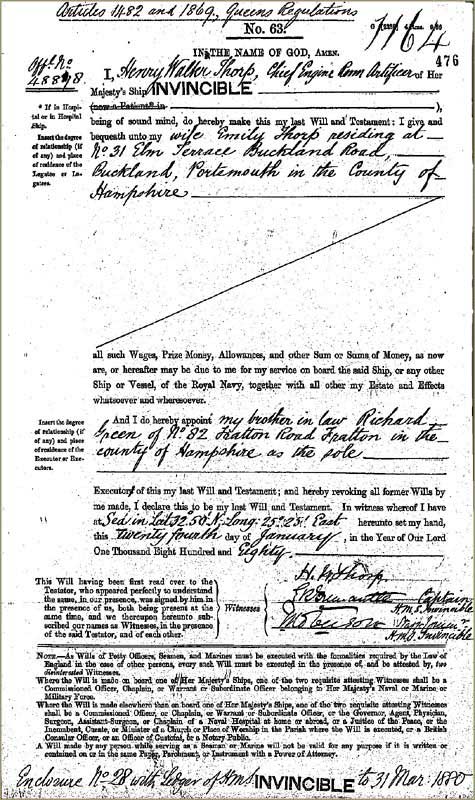 Some of the information you are looking for may be recorded in other places. For example: