The National Archives has over 5 million photographs in our collection. They have been taken for many different purposes by different government departments.

They range from propaganda photographs taken by the Ministry of Information in the Second World War, to photos from the Foreign and Colonial offices or those held in Metropolitan Police files. The largest collection of photographs, however, comes from the copyright records, called COPY 1. From 1862 to 1911, any image that an artist wanted to copyright was registered with the Government at Stationer’s Hall. This guide will tell you more about our collections and how to find photographs.

The earliest photographs were called ‘daguerreotypes’, invented by Louis Daguerre in 1839. The image was created by exposing a silver-plated copper sheet to iodide, which made a light sensitive coating. The plate was then exposed to light for up to an hour and then treated with other chemicals to fix the image. This meant that anyone photographed in this way had to sit still for some time. The process to create a daguerreotype was very expensive and only wealthier people could have afforded them.

From 1853, the development of ‘tintype plates’ made photography inexpensive and faster. People were able to go to photographic studios from the 1860s to have their photographs taken. Later developments in photographic printing and the invention of cheaper cameras meant that, by 1900, people could take their own photographs. 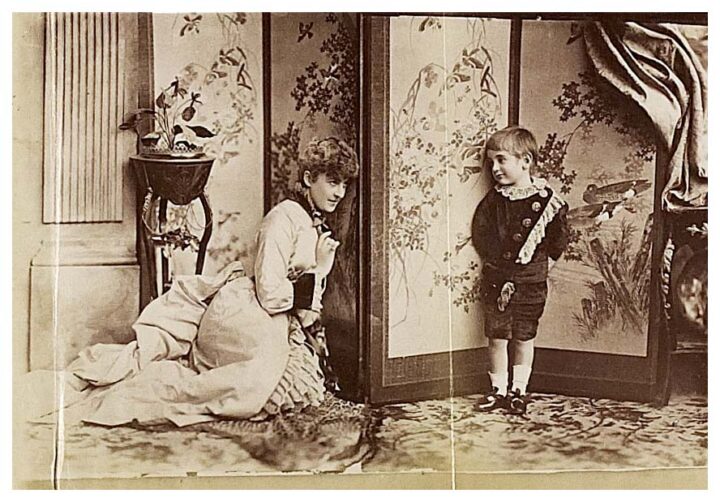 When using a photograph for research, one of the most important things you need to understand about it is the context and the circumstances that produced it. Be prepared to do further research if necessary.

Do not dismiss a photograph if you detect that it has been altered or staged. Take, for example, the example shown above. Clearly, this photograph has been taken in a studio.  This interior scene is setup with typical props – an ornate screen, a pot plant (possibly an aspidistra) on a stand and some luxurious draped fabric. What do these props suggest? A well-dressed woman is kneeling on the left with a small boy wearing expensive looking clothes standing on the right. They seem to be in conversation. Perhaps they are mother and son? The caption for this original photograph reads like a set of instructions from the photographer about the pose required, and is perhaps revealing about the production of the image. At this time it was also fashionable to create an ‘outdoor’ background using painted backdrops showing woodland scenes and posing the subject against fences or greenery.

Our photograph here can be seen as an ‘interpretation’ of two people. Are they wealthy? How can we tell? What is the relationship between them? Are they mother and son or governess and child? Why was this photograph taken? Is the photograph meant to convey Victorian values: a child listening an adult? Is this how children were expected to behave? What does this photograph infer about social class, childhood, the role of women or fashion/interior design? In this way,  a photograph being staged does not reduce its value as historical evidence.

19th and 20th century photographs cover a huge range of themes including portraiture, technological change, conflict, travel, leisure or reflecting political propaganda. Use these questions to help you understand what photographic sources can reveal: