How to look for records of... Military maps of the First World War

Use this guide if you are looking for trench maps or other military maps of the First World War. The National Archives holds many thousands of military maps from the First World War period. Many of them are official maps made by or for the British government and armed services. Others are foreign maps that were acquired and used by the War Office.

You may find it useful to look at maps alongside written records about First World War events, strategy and operations.

This guide also includes brief outlines of how the systems of map sheet numbers and grid references work for maps of the Western Front.

Most of these records are not viewable online. To view records which are not online you will need to visit The National Archives at Kew or request copies.

2. How to use this guide and get a search for maps started

A search for records of any kind, including maps, at The National Archives usually begins in our online catalogue. The following sections of this guide provide links to key record series that you can search within our catalogue, helping you to target your searches more precisely. By clicking on the series links (for example, WO 300) you will arrive on the respective ‘series description’ pages from where you can search the series, using dates/years and keywords such as:

It’s usually worth including the phrase AND (map OR plan) after the other words that you are searching with. In some cases, the best way to search for maps is by map sheet number. You may need to use an index map to identify sheet numbers. Where index maps exist, we have flagged this in the guide.

There are some record series made up solely of First World War maps (see ‘Main map collections’ section) and these tend to be easier to find. However, there are also lots of military maps within wider record series, containing, for example, all kinds of operational records, and many of the maps in these kinds of series have not been identified in the catalogue description.

Use the advanced catalogue search to restrict your search results to all the records of a specific government department, including its predecessors (for example, the War Office).  Use the department reference, which is always a letter code, to do this (the code for the War Office is WO).

Catalogue search results provide short descriptions of our records and a document reference for each one – you will need the document references to see the maps themselves. Very few of the maps covered in this guide are available to view online so to see them you will have to either visit us in Kew or order copies.

The record series WO 153 contains maps showing the progress of the war in various parts of the world. Many of these are printed maps with manuscript annotations.

Most of these maps are bound portfolios, not individual sheets. Try searching by one of the following:

Restrict your search by date to the relevant year or years.

We also have separate accumulations of maps for the following individual theatres of war:

Most of these maps are individual sheets. Try searching our catalogue by sheet number or place name. Restrict your search by date to the relevant year or years.

Alternatively, browse the relevant sections of the catalogue using the ‘browse by hierarchy’ option.

For guidance on searching for trench maps of the Western Front by sheet number, see the separate section below.

Many war diaries in WO 95 include printed or hand-drawn maps and plans to illustrate the text. These maps and plans are not noted individually in the catalogue.

For guidance on searching for war diaries, please see our guide to British Army Operations in the First World War.

Some maps were taken out of the war diaries after the war for the use of the authors of the Official History of the Great War. These are now among the maps in WO 153.

War diaries often refer to specific locations on maps by grid reference (for example, R20 b 8.5). See Appendix 3 for more information on how the grid referencing system works.

If there is no map in the war diary itself, you can search our catalogue for one within record series WO 297 or WO 153.

Unless the war diary specifies the map sheet number as well as the grid reference, you may need to check the index map to identify the relevant map sheet. See Section 7. on how to find trench maps by sheet number.

You can also search by place name within the following general series of maps:

Catalogues of printed War Office maps from the First World War period are in WO 401/5-10.

6. How to find trench maps of the Western Front by sheet number

Use the index map in the reading rooms at The National Archives to find the relevant sheet number. The sheet number will look something like 57C SW 3. See Appendix 2 for more information about how the sheet numbering system works.

The index map is not very detailed. You may need to look for the names of nearby towns. If necessary, look at a modern printed atlas or modern online map first to work out the approximate position of the area that you want.

You can search the catalogue for the sheet number. For instance, search for “57C SW 3” AND “WO 297”. (The search may not work correctly without this spacing and double quotation marks.) It may be helpful to sort your search results by reference or by date.

Choose the map with the nearest available date. Look for the words ‘trenches corrected to’ in the catalogue entry.

If you want a map that shows both British and German trenches, look for a catalogue entry that includes ‘(S)’ (for Secret Edition) or ‘Lines A/G’ (for Allied and German lines).

Looking at the map

Once you have ordered the correct map, it is not normally difficult to understand. Most of the 1:10,000-scale maps include keys to the symbols and abbreviations used at the bottom of the sheet. Sometimes there is more information on the back.

If you cannot find a suitable map using this method, try one of the following alternatives:

Other libraries and archives hold significant collections of trench maps and other published First World War maps. These include:

Use Library Hub Discover to find maps in the collections of some major UK research libraries.

Reproductions of trench maps in digital form include:

High-quality reproductions of some First World War maps are available from The National Archives’ Image Library.

9. Appendix 1: The usage of maps on the Western Front

About 34 million official British military maps were produced for the Western Front. They were produced at various scales for different purposes. The main scales are:

‘Secret’ editions of some maps were produced from September 1915 onwards. These showed the British trenches in detail too.

10. Appendix 2: The sheet numbering system for maps of the Western Front

The relevant parts of France and Belgium are divided in large numbered rectangles, each measuring about 20 miles west-to-east by 12.5 miles north-to-south. Each of these corresponds to a 1:40,000-scale map sheet. 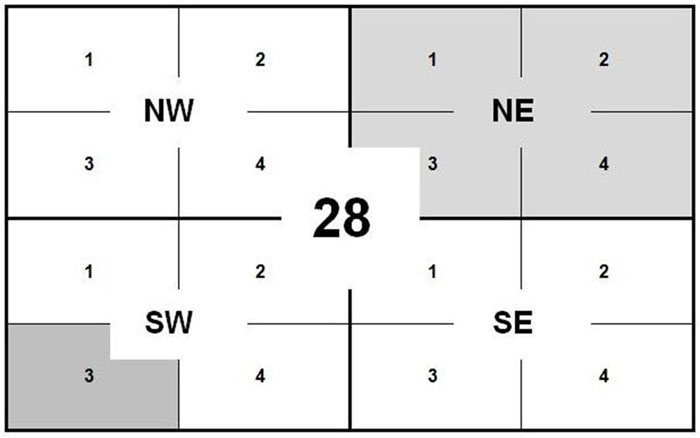 Many 1:10,000-scale maps have titles (which are place names) as well as sheet numbers. For example, sheet 28 SW 3 is also called Bailleul. These sheet titles are not currently included in our catalogue entries.

Maps at the scale of 1:5,000 and some maps made at the other scales did not correspond to the sheet numbering system. Instead, these maps have titles, which are listed in our catalogue. These sheet titles are often obscure, Some of them refer to operations or battlefield features.

11. Appendix 3: The grid referencing system for maps of the Western Front

The system of grid references is used to identify specific locations on printed British military maps. The same grid referencing system is marked on maps at different scales. 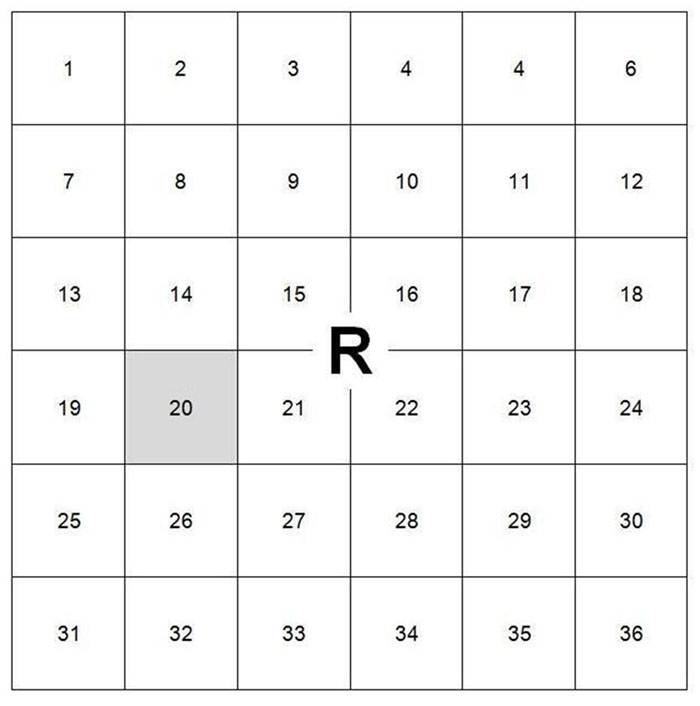 The shaded square in the diagram above is R20.

Each numbered square is further divided into four squares, each measuring 500 yards by 500 yards. These small squares are identified by the lower-case letters, a, b, c and d. These letters are not normally marked on the maps. 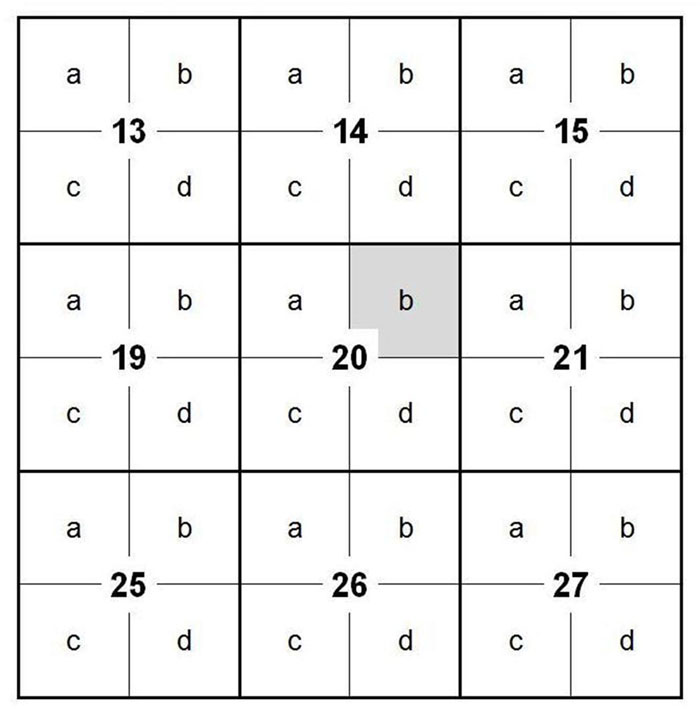 The shaded square in the diagram above is R20 b.

Within these small squares, specific points can be identified by numbers. These numbers work by dividing the square into an imaginary 10 by 10 grid. On some of the maps the grid lines are marked out in tenths to make working out grid references easier.

The divisions going horizontally west to east are called ‘eastings’. Those going vertically south to north are called ‘northings’. The eastings figure is written first, followed by the northings figure. The two may or may not be separated by a dot.

For example, to find the point specified by grid reference R 20 b 8.5:

This point is accurate to within an area of 50 yards square. 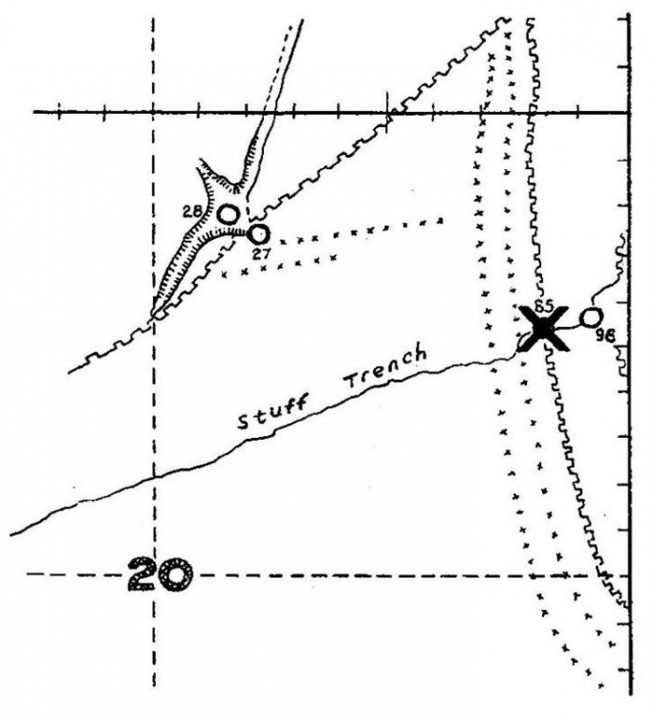 On some 1:5,000-scale maps, points of interest (such as a junction between two trenches) are labelled with partial grid references.

This point is accurate to within an area of 5 yards square.

A A Banks and A Palmer, A Military Atlas of the First World War (London, 1975)

Geraldine Beech: Military Maps of the Western Front in Ancestors, no 8, June/July 2002

S Forty Mapping the First World War: Battlefields of the Great Conflict from Above (London, 2013)

Documentation about military surveying during the First World War is available on the Defence Surveyors’ Association website.