The Search for ‘Terra Australis’

Suggested inquiry questions: What do these documents reveal about Captain Cook’s voyage to find ‘Terra Australis’?

Potential activities: Students can create annotated maps and/or timelines to explain the impact of Cook's voyage.

In June 1769, James Cook opened an envelope containing secret instructions from King George III. Cook was in Tahiti, having led the expedition to observe the transit of Venus across the sun by astronomer Charles Green and others.

These secret instructions revealed that there was a second mission: to find the mysterious alleged southern continent ‘Terra Australis’, and claim it for Britain.

Cook set sail southward. From 1769 to 1770, he would reach and chart what are now New Zealand and the east coast of Australia. While he never found ‘Terra Australis’ – which was thought to cover the entire southern hemisphere – his voyage had long-lasting consequences for the places he visited and led to the formation of the modern countries Australia and New Zealand. Although they were inhabited, Cook charted and claimed the places he visited in the name of his country, which led to their occupation and colonisation by Great Britain. The first penal colony in Australia was established in 1788 in Botany Bay, a place originally named and described by Cook. Today, Australia and New Zealand are still part of the Commonwealth of Nations.

Use this lesson to explore extracts from Cook’s original journal with other documents to find out what happened. What was the impact of his voyage on Britain and on the Indigenous peoples of the places he arrived at? 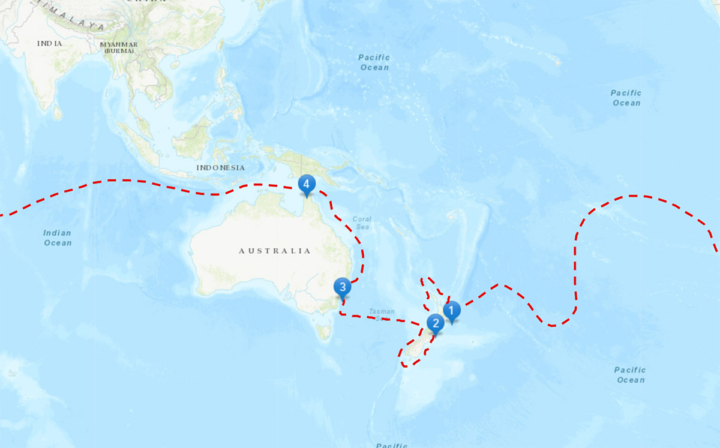 Click on this map to trace Cook’s voyage and see the location of each source in this lesson. Read an accessible description of the map here.

Source 1: Secret instructions to Cook from the British government.

Source 2a: the oldest known Māori map of New Zealand, drawn by Tooka-Titter-anue Wari-Ledo in 1793.

Source 2b: chart of New Zealand drawn by Cook during his first voyage, around 1770.

These are two maps of New Zealand. One is drawn by Tuki Tahua, a Māori man kidnapped by Philip Gidley King, the Governor of the British colony on New Zealand in the 1790s. Māori are the Indigenous people of New Zealand. The map was annotated by King, who also traced it with ink.

The other map was drawn two decades earlier by Captain James Cook during his first voyage to the islands.

Source 2a
Source 2b

Source 3: extract from Cook’s journal entry from 8 October 1769. This entry describes the first time Cook steps foot on what is now New Zealand, in what he would later name ‘Poverty Bay’.

Look carefully at the document.

Source 4: extract from Cook’s journal entry from 31 January 1770. He is on Motuara Island in modern-day New Zealand.

Source 5: extract from Cook’s journal entry from 22 August 1770. He is on ‘Possession Island’ in modern-day Australia.

In 1768, Captain James Cook set out on a voyage from England to the South Pacific Ocean, a joint initiative between the Admiralty and the Royal Society, which was commissioned by King George III. Cook and his men travelled on the HMS Endeavour from 1768 to 1771.

The official reason for the voyage was to observe the transit of Venus in 1769 from Tahiti. The transit of Venus takes place when the planet Venus passes directly between the Sun and a bigger planet. The hope was that by observing it, astronomers would be able to measure the size of the solar system.

However, this was not the government’s only aim. Cook had received a second set of instructions marked ‘Secret’, which he was to open after observing the transit. These instructions told him to travel southward to search for a large, undiscovered continent that might lie in the South Pacific.

This continent, called ‘Terra Australis’ (Latin for ‘South Land’), had been theorised to exist for many centuries, even appearing on world maps. It was theorised to be very, very large – much larger than the lands that Cook would eventually come to.

If Cook were to find this Southern continent, the secret instructions told him to chart its coasts, build an alliance with its people, get as much information as he could about them, and claim any useful land for Great Britain.

These instructions were kept secret to avoid other European powers finding out about his search. European countries were competing with each other for dominance by claiming and colonising land all over the globe to build their empires. In fact, the Netherlands had already claimed the western coast of Australia (‘New Holland’) in 1664, although without the knowledge of what lay beyond and without settling in the region.

After opening his secret instructions in Tahiti, Cook set out southward, not knowing what he would find. He eventually reached the coast of what is now New Zealand and charted its entire outline. After that, he reached and charted the eastern coast of what is now Australia. Despite meeting many of the inhabitants, he claimed both New Zealand and eastern Australia in the name of King George III.

Cook travelled with many different men. One of the most notable people on the journey was Joseph Banks, a wealthy British botanist and President of the Royal Society. He accompanied Cook to collect botanical specimens, bringing around 30,000 specimens home. Banks would eventually advocate directly for British colonisation of Australia, and would advise the government on Australian matters.

Some of the most significant, yet unnamed people that feature in Cook’s journals are the Indigenous peoples of Australia and New Zealand. In New Zealand, Cook encountered many Māori groups, including people who were killed by his men such as Ngāti Oneone leader Te Maro and Rongowhakaata leader Te Rakau. In Australia, Cook and his men first landed on Gweagal country in Dharawal land, shooting at the Gweagal men they encountered. They encountered many other Australian Aboriginal peoples throughout the rest of the voyage.

Partly as a result of Cook’s charts and claims to the land, and the knowledge gained from the voyage, both New Zealand and eastern Australia (later the entire country) would become part of the British Empire. Australia became a penal colony in 1788, just 17 years after Cook’s voyage ended. Over the next 80 years, 158,702 convicts arrived in Australia from England and Ireland, as well as 1,321 from other parts of the Empire. New Zealand did not become a formal British colony until 1840. In the centuries since colonisation, Indigenous peoples in both countries have faced loss of land, cultural dispossession, discrimination, legal barriers, and a sharp decline in population.

Australia became nominally independent in 1901 and New Zealand in 1907. Both countries still have the British Monarch as their Head of State.

In this lesson, students examine a series of extracts from James Cook’s journal from 1769-1771 along with a couple of maps and secret instructions for Cook from the Admiralty.

The first source that students examine are extracts from a document of secret instructions to Cook from the British government, to think about why he was given this secret mission. Students then go on to explore the oldest known Māori map of New Zealand from 1793, which students compare to second map of New Zealand drawn by Cook around 1770 during his first voyage. There are opportunities for them to explore the different attitudes/viewpoints contained in these maps and consider the value of maps as historical sources. For example, Cook’s map focuses more on the geographic details of New Zealand, while Tuki Tahua’s reveals more about memories, stories, sacred places, and useful resources.

Following on from this, students explore extracts from Cook’s journal that describe what is now called New Zealand and an area he would later name ‘Poverty Bay’. A further extract from his journal allows students to see his comments on Motuara Island in modern-day New Zealand. The final extract from his journal from 22 August 1770 describes ‘Possession Island’ in modern-day Australia.

Together, these sources help students assess the impact of Cook’s secret mission to find the mysterious Southern continent, ‘Terra Australis’. Cook’s voyage proved to have huge significance for Britain, the places he visited and the Indigenous peoples he encountered. The impact of the British colonial system which flowed from it still lives on today – an important discussion topic for students on completing the lesson.

It is hoped too that by exploring these sources, students will see the value of considering other sources that would be helpful.

All document extracts have transcripts and simplified transcripts. Please note that these sources include racist language and attitudes and are presented here to accurately represent a historical narrative. This language wasn’t acceptable at the time and isn’t acceptable today.

Teachers may wish for students to work in pairs or small groups on individual sources and report to the class as a whole with their findings.

This lesson can be used as part of wider discussion relating to British colonial history in Australia and New Zealand.

What was the impact of Cook’s voyage for Indigenous peoples of Australia and New Zealand in terms of the following?

This is just a small selection of issues that could be explored – other issues include laws and policies, incarceration rates, violence, health impacts, and many more.

This lesson could also be complemented by learning about Aboriginal and Torres Strait Islander and Māori cultures and peoples. Below are some suggested resources:

Teachers could use selected sources, for example the maps or shortened versions of the extracts from the lesson, to support an inquiry into Captain Cook supported by the simplified transcripts for ‘Significant People’.

Teachers could use selected sources, for example the maps or shortened versions of the extracts from the lesson, to support an inquiry into Captain Cook supported by the simplified transcripts.

Suggested inquiry questions: What do these documents reveal about Captain Cook’s voyage to find ‘Terra Australis’?

Potential activities: Students can create annotated maps and/or timelines to explain the impact of Cook's voyage.