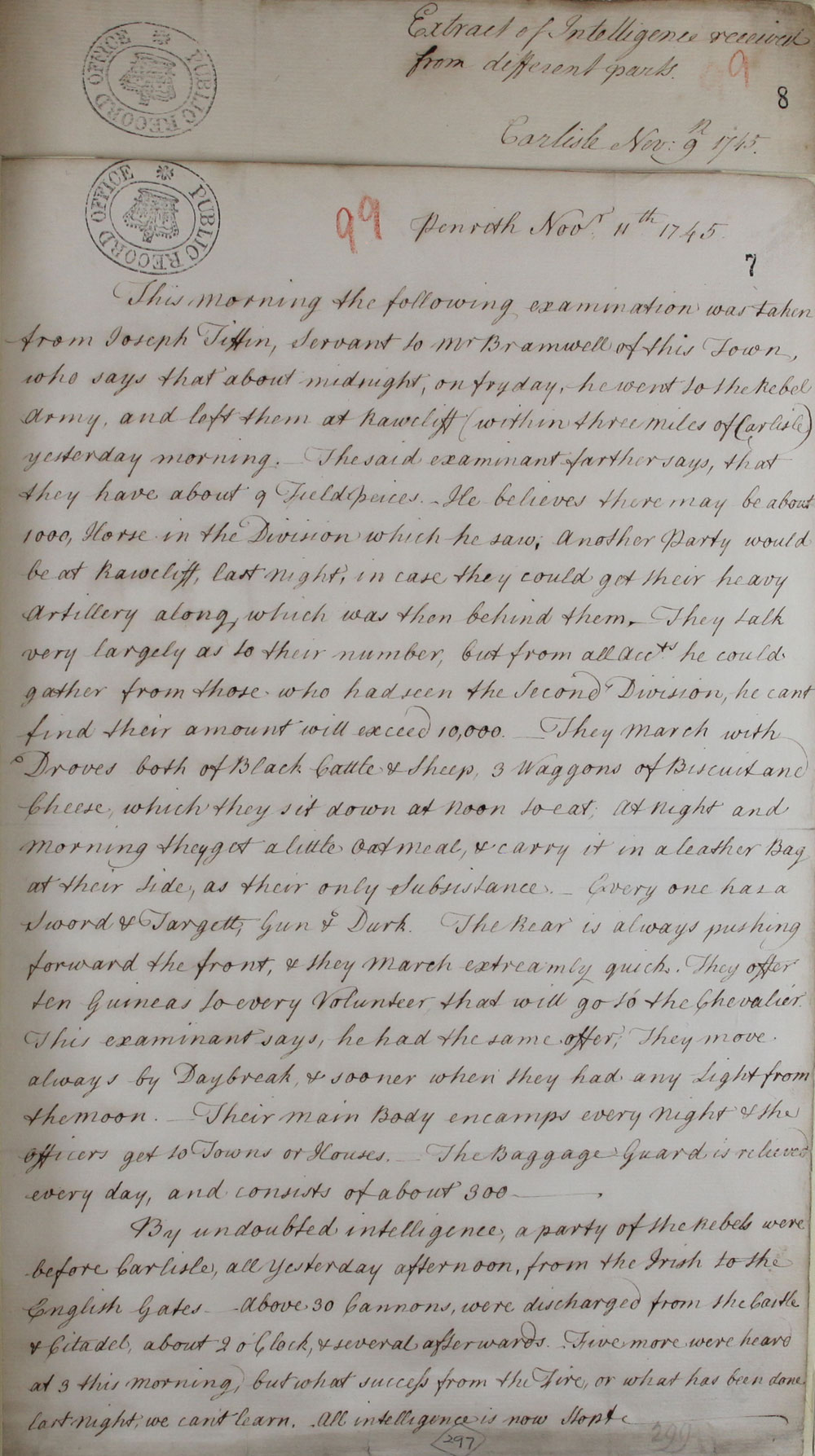 Extract of intelligence about the Jacobite army received from Penrith (SP 36/73/3/f7).

This morning the following examination was taken from Joseph Tiffin, servant to Mr. Bramwell of this Town, who says that about midnight, on Friday, he went to the Rebel army, and left them at Rawcliff (within three miles of Carlisle) yesterday morning. The said examinant farther says, that they have about 9 Fieldpieces [a moveable gun to use to support soldiers on the front line]. He believes there may be about 1,000 Horse in the Division which he saw, Another party would be at Rawcliff, last night in case they could get their heavy artillery along, which was then behind them. They talk very largely as to their number, but from all account he could gather from those who had seen the Second Division, he cant find their amount will exceed 10,000. They march with Droves both of Black Cattle and Sheep 3 wagons of Biscuit and Cheese, which they sit down at noon to eat; At night and morning they get a little oatmeal, & carry it in a leather Bag at their side, as their only subsistence [food]. Everyone has a sword & targett [small round shield], Gun & Durk [long straight-bladed dagger]. The Rear is always pushing forward the front, & they march extreamly quick. They offer ten Guineas [twenty-one shillings] to every Volunteer that will go to the Chevalier [fight on horseback]. This examinant [witness] says, he had the same offer, they move always by Daybreak, & sooner when they had any Light from the moon. Their main Body encamps every night & the officers get to Towns or Houses. The Baggage Guard is relieved every day, and consists of about 300.

By undoubted intelligence, a party of the rebels were before Carlisle all yesterday afternoon, from the Irish to the English Gates. Above 30 cannons, were discharged [fired] from the Castle and citadel about 2 o’Clock & several afterwards. Five more were heard at 3 this morning, but what success from the Fire, or what has been done last night we cannot learn. All intelligence is now stopt.