How to look for records of... Royal Naval Volunteer Reserve service records 1903-1922

They include the service records of ratings who joined the RNVR between 1903, when the RNVR was formed, and 1919, and officers who joined between 1914 and 1922. 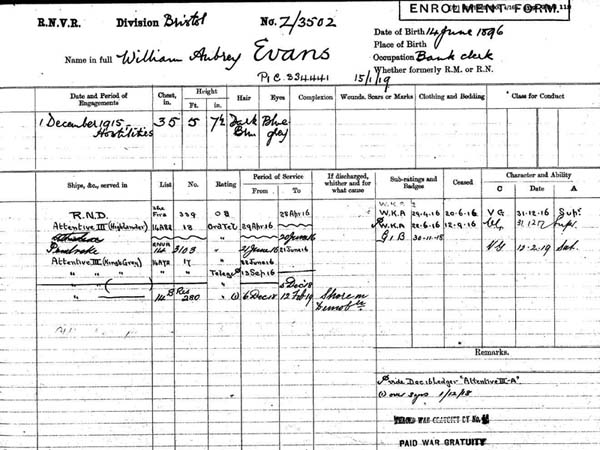 The service records of ratings and officers are different in appearance. The right-hand image is the record of William Aubrey Evans (from ADM 337/5), who was a rating in the RNVR.

It is on a pre-printed form, with the details listed in headed columns. The form shows that he gives his date of birth as 14 June 1896, and there is also a description of his appearance. Below this we find out the ships Evans served in for the duration of the First World War. 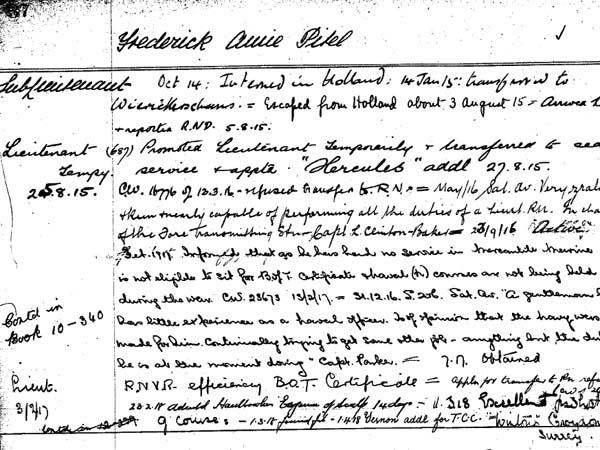 The right-hand image is the record of Frederick Awe Pitel (from ADM 337/117), who was an officer in the RNVR. This record lists his promotions, honours and awards during the First World War.

You can identify the division using the table below:

It is important to note that not all RNVR service records have survived. If you are unable to find the service record of someone who joined the RNVR, the reason may be that he saw service with the Royal Naval Division.

For some divisions, the Fleet Air Arm Museum holds the engagement papers that men signed upon joining the RNVR. These can be useful if you need details about ratings whose records have not survived in series ADM 337, or to supplement information given in service records.