How to look for records of... Olympic and Paralympic Games and sporting history

Use this guide to help find records in The National Archives and other archives in the UK relating to:

There are numerous sources of information about the 2012 Olympic and Paralympic Games.

There are also directories which help to locate records about sport. These are listed below.

3. How to search for records

Search Discovery to find records from The National Archives and over 2,500 other archives across the UK, as well as some abroad. For detailed advice on searching Discovery and understanding your results see our Discovery help pages.

If you want to search for records at The National Archives only, choose the relevant option under the search box.

Unless you have restricted your search to The National Archives only, your search results are likely to list records held at more than one archive. If you want to find out how to see a specific record, you will need to contact the relevant archive directly.

If you get too many results, you can use the filters on the left to narrow them down by the dates the records cover or the archive they are held by.

Alternatively, you can use the Advanced search option and include more about what you want to find before you search.

Searching Discovery won’t find everything. Records of sports organisations and individuals can be held in local record offices, university collections and special repositories. Not all of these places have their collections listed in Discovery, and some have only part of their holdings listed.

Whilst Discovery could be the best way to start your research, you should also think about looking for archives based on their locality or the theme of their collection.

You can use Find an archive to search for an archive in this way. For example, search for ‘Manchester’ or for ‘football’ to see what archives cover the Manchester area or hold football-related records. For more advice on using Find an Archive, see Discovery help.

You will also find libraries are a great resource as there are plenty of published works on sport and related topics. Search The National Archives’ library catalogue for publications you can see onsite at Kew. 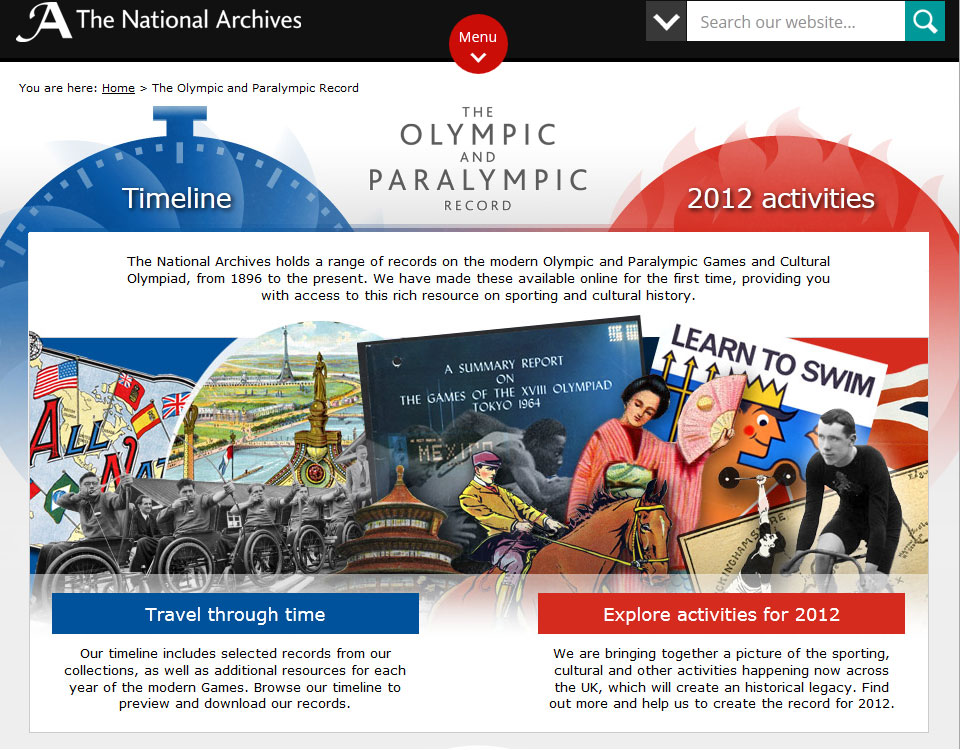 The Olympic and Paralympic Record

4.1 The Olympic and Paralympic Record

The Olympic and Paralympic Record gives you two distinct ways to research the Olympics:

The London Organising Committee of the Olympic and Paralympic Games (LOCOG) was established in July 2005 shortly after the Olympic bid was won by the UK Government London Olympic Bid Team.

LOCOG was responsible for organising, publicising and staging the London 2012 Games. Its records include material ranging from the bid process and the planning and delivery of the Games, through to the organisation’s own dissolution.

Discovery, our catalogue, lists 13 series of LOCOG records with the department reference LOC. Their descriptions show whether the records are:

The majority of records from LOCOG are in digital form and are gradually being transferred into our digital archive. As this process continues, Discovery will be updated to include references to these records. 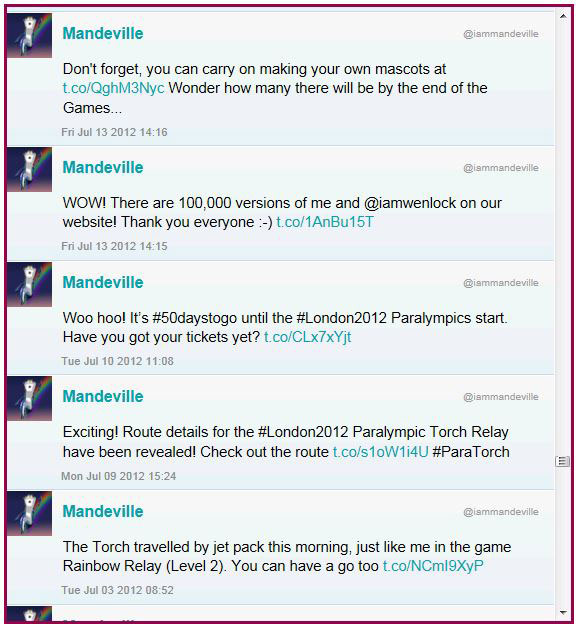 London 2012 is considered the first digital Olympics. With dedicated websites, blogs and Twitter feeds there was public engagement and involvement as never before.

The London 2012 Olympic and Paralympic Games and government organisations created tweets on Twitter and videos on You Tube. These have been preserved on the UK government web archive as part of the public record.

5. Records on sport in general at The National Archives 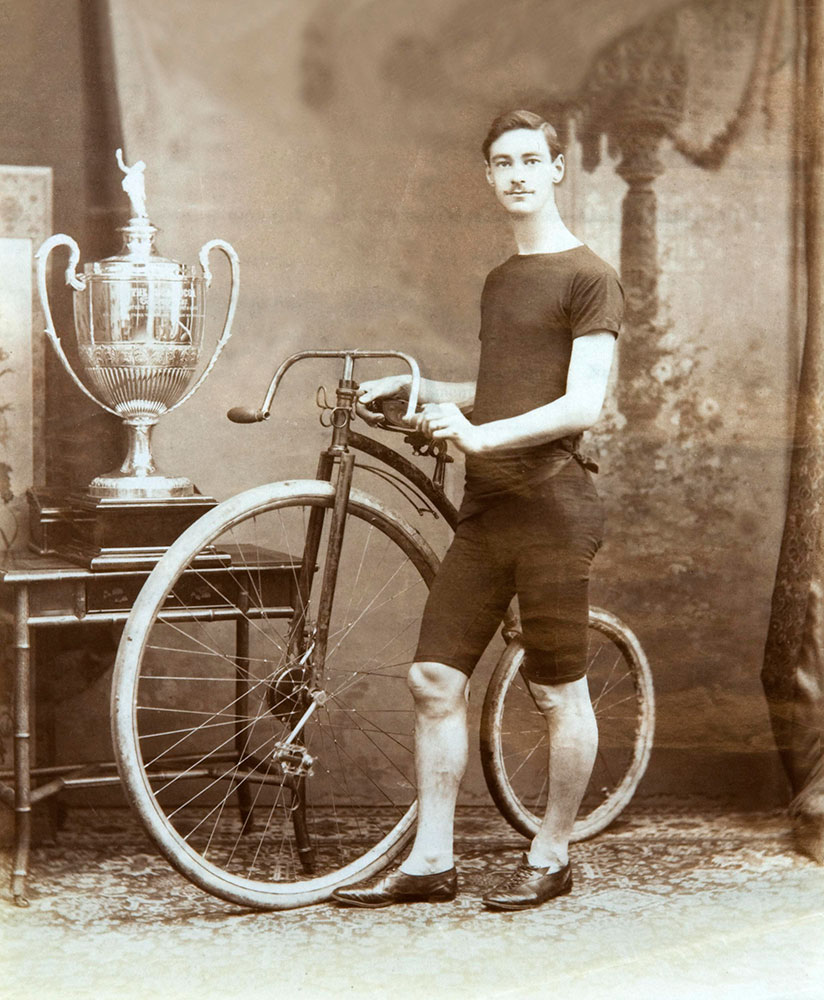 Use Discovery, our catalogue, to search for records. If you only want to find records held at The National Archives, select that option underneath the search box.

You can use Advanced search if you want to include criteria such as dates or record references where you know them. Some examples of record series at The National Archives that might be of interest are:

Many archives regularly take in new records to add to their collections – this process is known as accessioning. Every year, The National Archives collects information about new accessions from over 250 archives across Britain and Ireland. This survey is known as ‘Accessions to Repositories’.

Find out where records relating to sport have been added to archive collections in any year from 1995 by clicking on the relevant year and then picking ‘sport’ from the list of topics.

Accessions relating to the Olympics can be found from 2010 onwards by looking in the topic ‘sport’ and/or ‘London’ and from 2012 the topic ‘2012 Olympics and Paralympics’ is included.

The following list includes some of the organisations that hold important archival collections relating to the history of sport and the Olympic and Paralympic movements:

Some organisations hold records relating to national or even international sport disciplines.

National Football Museum
Holds unique collections of football artefacts and archives, including the FIFA collection and the Harry Langton archive.

MCC Archive
Holds records of the Marylebone Cricket Club, from 1714 onwards, as well as archives of individual cricketers, including Pelham Francis Warner.

University of Huddersfield: Archives and Special Collections
Holds the archive of the Rugby Football League, which contains records of individual players and clubs in Cumbria, Lancashire and Yorkshire with records for all British professional clubs since 1896. 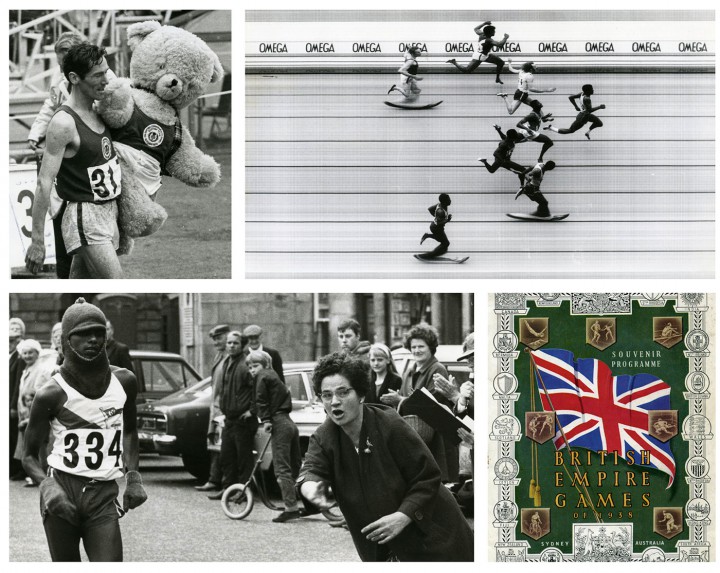 British Film Institute
The BFI Player allows you to browse a range of films relating to sport disciplines which can be viewed online.

7.2 Other guides to sports records

Some local archives with specialist collections have put together their own guidance to help locate records relating to sport. 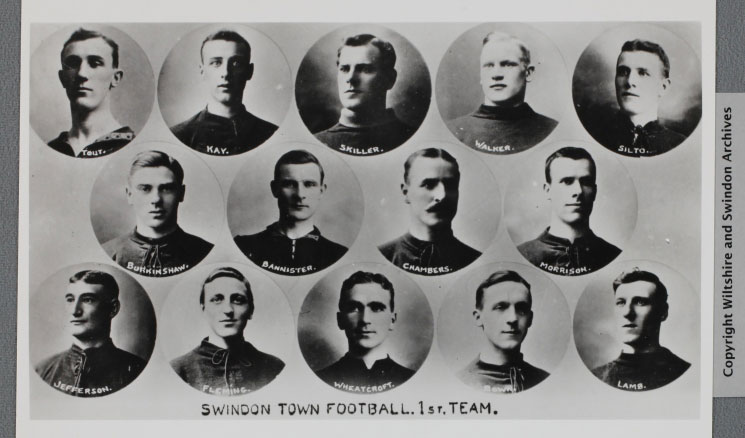 Some organisations have created directories of collections, websites and other information about sport archives.

Oral History: Sport
Online collection of sound recordings, maintained by the British Library Sound Archive, which documents the activities of sportsmen and women of Britain in the twentieth century, including interviews with sports players, coaches and enthusiasts.

The People’s Record
‘Inspired by London 2012’ project which records the impact of the London 2012 Olympic and Paralympic Games.

Sporting Memories Network
Online memories collected by a charity which uses memories of sport as a form of reminiscence activity for people suffering from dementia, depression and loneliness.

Take a look at our array of podcasts relating to sport.