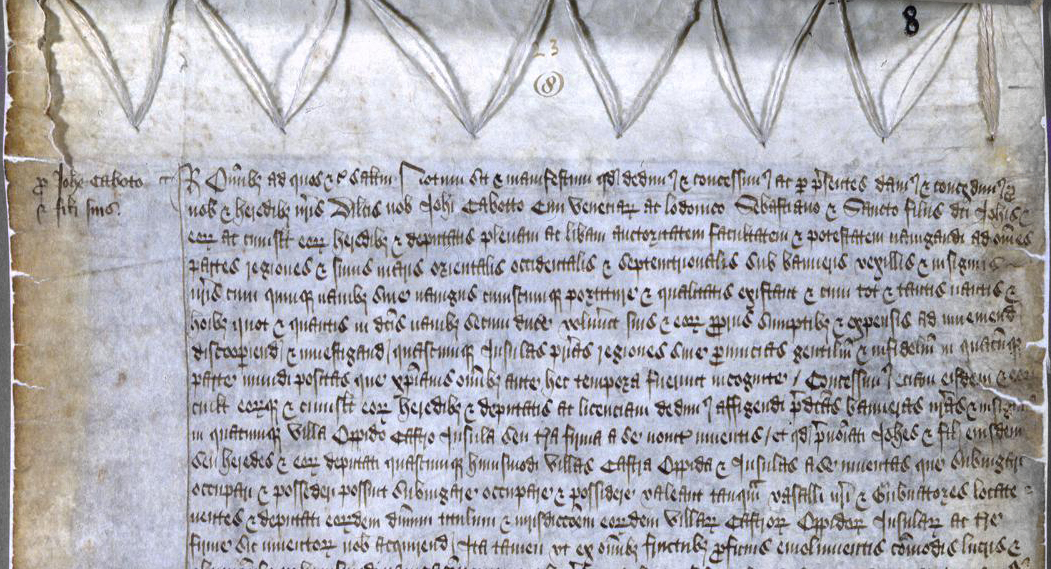 John Cabot (c.1450-c.1499), with permission from King Henry VII given in the beginning of this letter, sailed West across the North Atlantic Ocean in 1497. Cabot hoped to find a new trade route to Asia. In fact he discovered Newfoundland (now part of Canada). He had found a continent that was unknown in Europe and claimed it for the English crown. (Catalogue ref: C 76/178)

The king to those etc, Greeting. Be it known and shown that we have given and granted, and by these presents do give and grant for us and our heirs to our well beloved John Cabot citizen of Venice and to Lewis, Sebastian, and Santius, sons of the said John, and to the heirs of them, and every of them, and their deputies, full and free authority, leave, and power to sail to all parts, countries, and seas of the East, of the West, and of the North, under our banners and ensigns, with fine ships of what burthen or quantity so ever they be, and as many mariners or men as they will have with them in the said ships, upon their own proper costs and charges, to seek out, discover, and find whatsoever isles, countries, regions or provinces of the heathen and infidels whatsoever they be, and in what part of the world so ever they be, which before this time have been unknown to all Christians, we have granted to them, and also to every of them, the heirs of them, and every of them, and their deputies, and have given them licence to set up our banners and ensigns in every village, towns, castle, isle, or mainland of them newly found.

The King gives his permission to our much loved John Cabot from Venice and his sons Lewis, Sebastian and Santius and their family, to sail to the East, West or North. In the name of England, in whatever number of ships they have, they may discover any islands or countries which are not Christian. The King gives them the right to put our flags [claim for England] in any new land, village, castle or island that they may find.