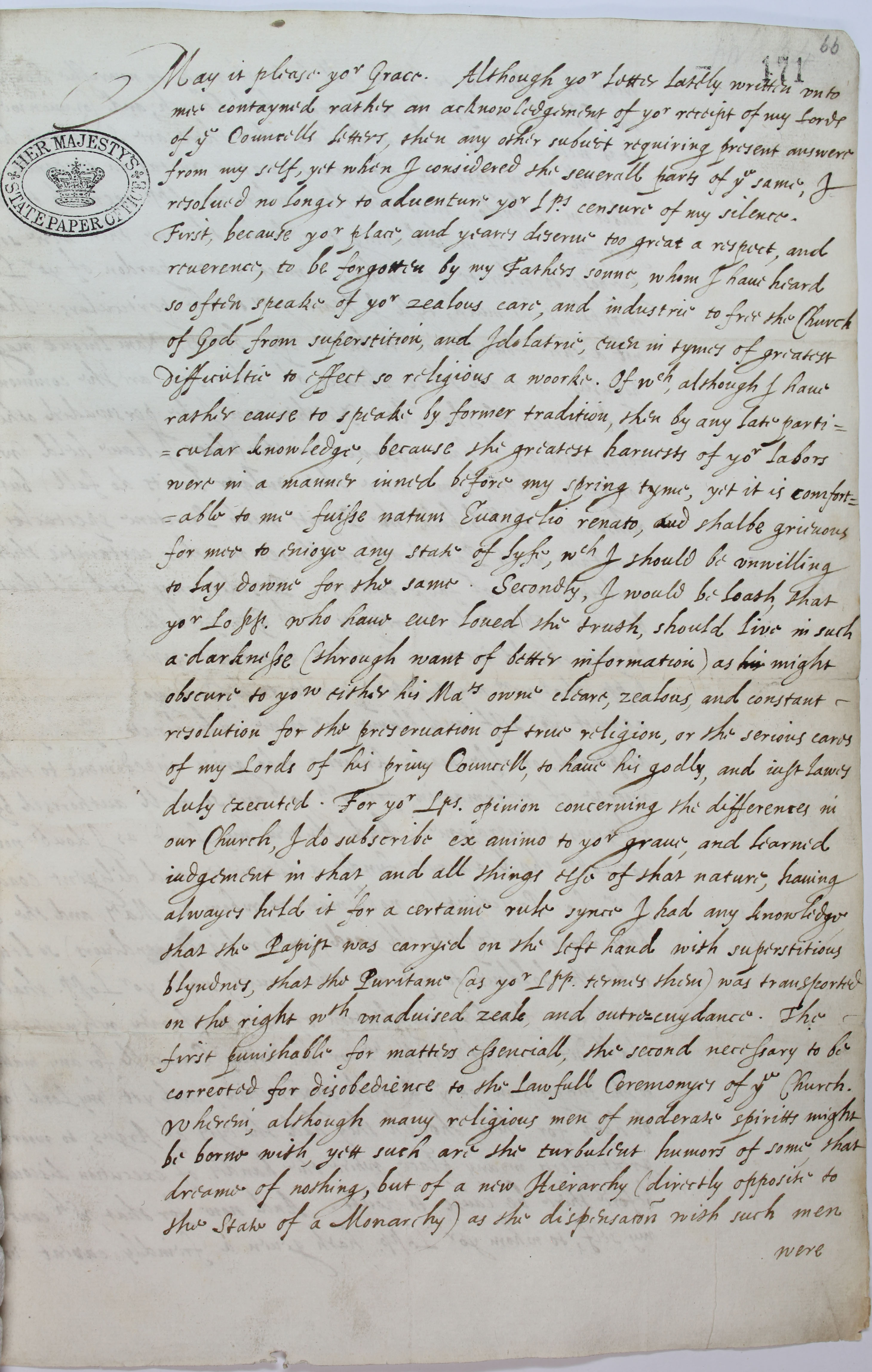 This letter shows the concern over differences in religion at the start of James’ reign and the problems that this was causing. Archbishop Hutton laments the encouragement given to Roman Catholics (‘papists’ and recusants) as well as to puritans (Protestants who sought the further reformation of the Church of England).

May it please your Grace. Although your letter lately written unto me contained rather an acknowledgement of your receipt of my Lords of the Council’s letters, then any other subject requiring present answer from myself, yet when I considered the several parts of the same, I resolved no longer to adventure your Lordships censure of my silence. First, because your place and years deserve too great a respect, and reverence, to be forgotten by my Father’s son, whom I have heard so often speak of your zealous care, and industry to free the Church of God from superstition and idolatry, even in times of greatest difficulty to effect so religious a work. Of which, although I have rather cause to speak by former tradition, then by any late particular knowledge, because the greatest harvest of your labours were in a manner earned before my spring time, yet it is comfortable to me fuisse natum Evangelio Renato [to have been born at a time when the gospel has been reborn], and shall be grievous for me to enjoy any state of life, which I should be unwilling to lay down for the same. Secondly, I would be loath, that your Lordship who have ever loved the truth, should live in such a darkness (through want of better information) as might obscure to you either his Majesty’s own clear, zealous and constant resolution for the preservation of true religion, or the serious cares of my Lords of his privy Council, to have his godly, and just laws duly executed. For your Lordship’s opinion concerning the differences in our Church, I do subscribe ex animo [from the heart] to your grave, and learned judgement in that and all things else of that nature, having always held it for a certain rule since I had any knowledge that the Papist was carried on the left hand with superstitious blindness, that the Puritan (as your lordship terms them) was transported on the right with unadvised zeal and outrecuidance [arrogance]. The first punishable for matters essential the second necessary to be corrected for disobedience to the lawful ceremonies of the Church. Wherein, although many religious men of moderate spirits might be borne with, yet such are the turbulent humours of some that dream of nothing but of a new Hierarchy (directly opposite to the state of a Monarchy)…