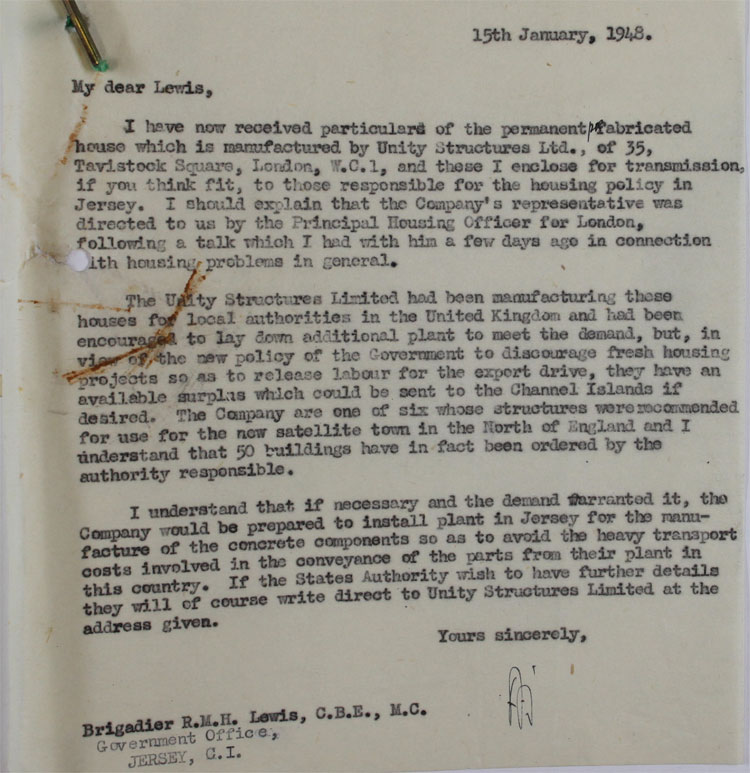 I have now received particulars of the permanent/fabricated house which is manufactured by Unity Structures Ltd., of 35, Tavistock Square, London, W.C.1, and these I enclose for transmission, if you think fit, to those responsible for the housing policy in Jersey. I should explain that the Company’s representative was directed to us by the Principal Housing Officer for London, following the talk which I had with him a few days ago in connection with housing problems in general.

The Unity Structures Limited has been manufacturing these houses for local authorities in the United Kingdom and had been encouraged to lay down additional plant to meet the demand, but in view of the new policy of the Government to discourage fresh housing projects so as to release labour for the export drive, they have an available surplus which could be sent to the Channel Islands if desired. The Company are one of six whose structures were recommended for use for the new satellite town in the North of England and I understand that 50 buildings have in fact been ordered by the authority responsible.

I understand that if necessary and the demand warranted it, the Company would be prepared to install plant in Jersey for the manufacture of the concrete components so as to avoid the heavy transport costs involved in the conveyance of the parts from their plant in this country. If the States Authority wish to have further details they will of course write direct to Unity Structures Limited at the address given.