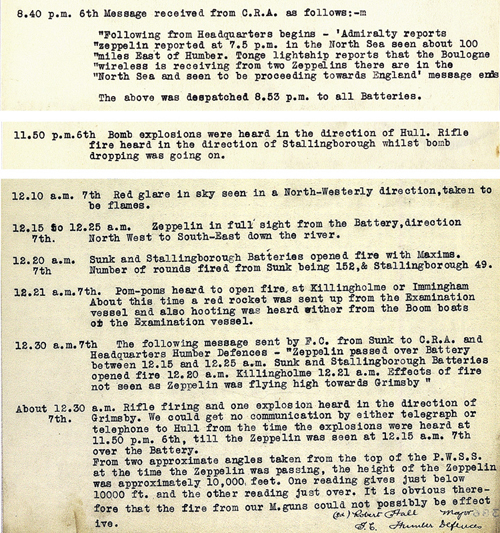 “Following from Headquarters begins – ‘Admiralty reports “zeppelin reported at 7.5 p.m. in the North Sea sean about 100 “miles East of Humber.  Tonge lightship reports that the Boulogne “wireless is receiving from two Zeppelins there are in the “North Sea and seen to be proceeding towards England’ message ends

The above was dispatched 8.53 p.m. to all Batteries.

12.10 a.m. 7th Red glare in sky seen in a North-Westerly direction, taken to be flames.

12.30 a.m. 7th The following message sent by F.C. from Sunk to C.R.A. and Headquarters Humber Defences – “Zeppelin passed over Battery between 12.15 and 12.25 a.m. Sunk and Stallingborough Batteries opened fire 12.20 a.m. Killingholme 12.21 a.m. Effects of fire not seen as Zeppelin was flying high towards Grimsby”

About 12.30a.m. 7th. Rifle firing and one explosion heard in the direction of Grimsby,  We could get no communication by either telegraph or telephone to Hull from the time the explosions were heard at 11.50p.m. 6th, till the Zeppelin was seen at 12.15 a.m. 7th over the Battery.

From two approximate angles taken from the tip of the P.W.S.S. at the time the Zeppelin was passing, the height of the Zeppelin was approximately 10,000 feet.  One reading gives just below 10000 ft. and the other reading just over.  It is obvious therefore that the fire from our M.guns could not possibly be effective.

pom-pom: nickname for a machine-gun