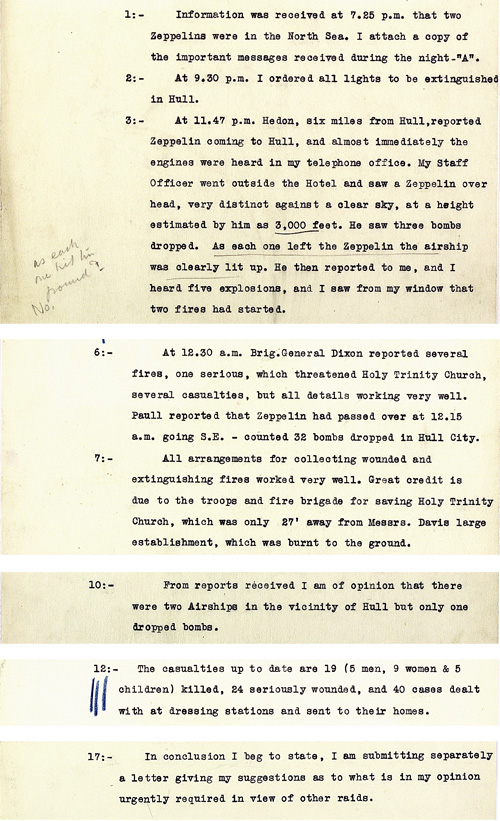 1:- Information was received at 7.25 p.m. that two Zeppelins were in the North Sea.  I attach a copy of the important messages received during the night = “A”.

3:- At 11.47 p.m. Hedon, six miles from Hull, reported Zeppelin coming to Hull, and almost immediately, the engines were heard in my telephone office.  My Staff Officer went outside the Hotel and saw a Zeppelin over head, very distinct against a clear sky, at a height estimated by him as 3,000 feet.  He saw three bombs dropped.  As each one left the Zeppelin the airship was clearly lit up.  He then reported to me, and I heard five explosions, and I saw from my window that two fires had started.   […]

7:- All arrangements for collecting wounded and extinguishing fires worked very well.  Great credit is due to the troops and fire brigade for saving Hold Trinity Church, which was only 27′ away from Messes. Davis large establishment, which was burnt to the ground.   […]

10:- From reports received I am of opinion that there were two Airships in the vicinity of Hull, but only one dropped bombs.

17:- In conclusion I beg to state, I am submitting seperately a letter giving my suggestions as to what is in my opinion urgently required in view of other raids.

1. This is a report of the raid by Major General Ferrier, Commander of the Humber Defences.