‘Reward’ poster for the arrest and conviction of men who destroyed three knitting machines in January 1812. Catalogue ref: HO 42/119 f.135 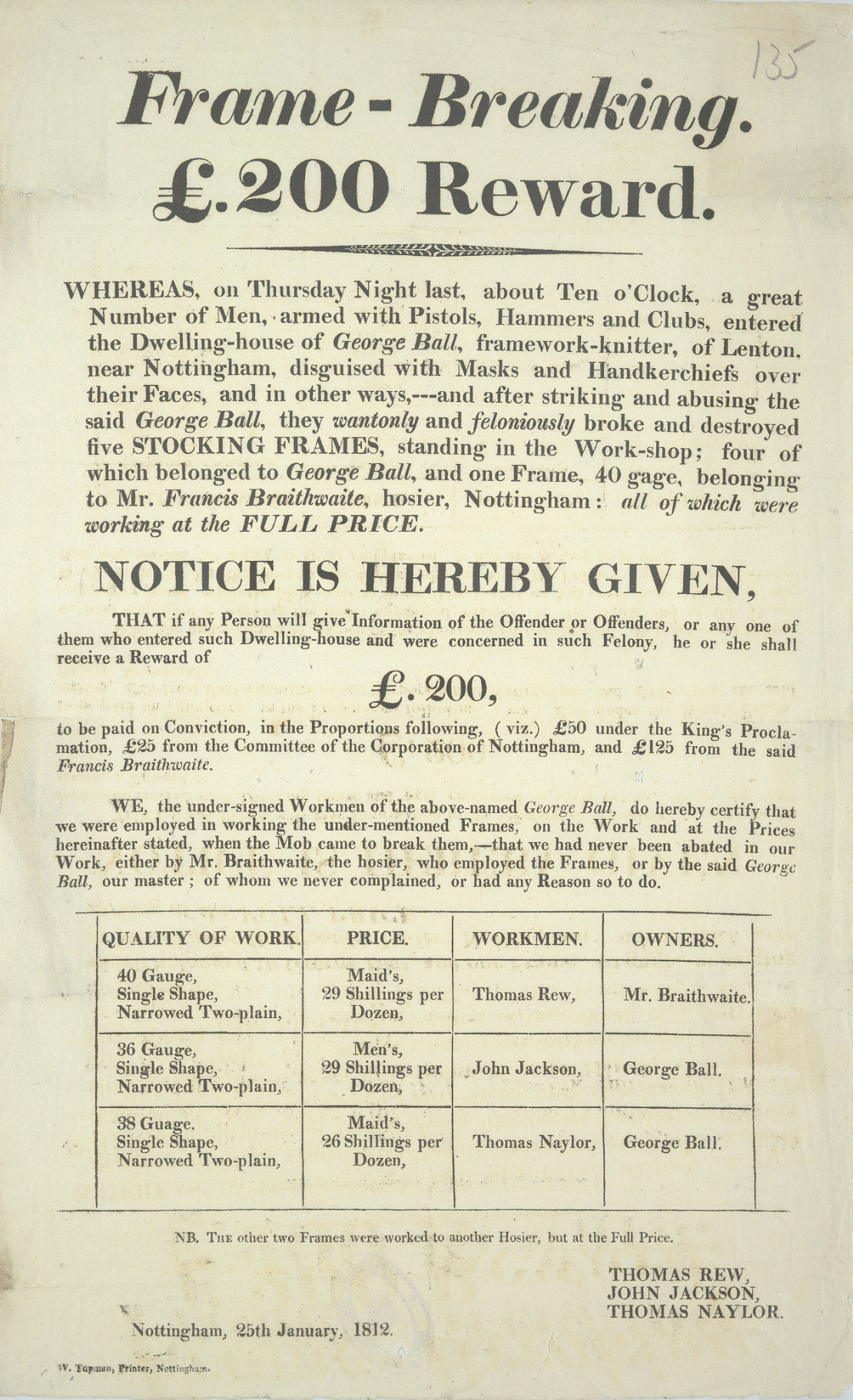 Gauge: Number of stitches a garment has per inch, used to calculate width of cloth.

Hosier: Person who makes or deals in hose or stockings or goods knitted or woven like hose.

WHEREAS, on Thursday Night last, about Ten o’ Clock, a great Number of Men, armed with Pistols, Hammers and Clubs, entered the Dwelling-house of George Ball, framework-knitter, of Lenton, near Nottingham, disguised with Masks and Handkerchiefs over their Faces, and in other ways, – and after striking and abusing the said George Ball, they wantonly and feloniously [against the law] broke and destroyed five STOCKING FRAMES, standing in the Work-shop; four of which belonged to George Ball, and one Frame, 40 gauge, belonging to Mr. Francis Braithwaite, hosier, Nottingham: all of which were working at the FULL PRICE.

NOTICE IS HEREBY GIVEN,

THAT if any Person will give Information of the Offender or Offenders, or any one of them who entered such Dwelling-house and were concerned in such Felony, he or she shall receive a Reward of

to be paid on Conviction [found guilty], in the Proportions [amounts] following, (viz.) £50 under the King’s Proclamation, £25 from the Committee of the Corporation of Nottingham, and £125 from the said Francis Braithwaite.

WE, the under-signed Workmen of the above-named George Ball, do hereby certify that we were employed in working the under-mentioned Frames, on the Work and at the Prices hereinafter stated, when the Mob came to break them, – that we had never been abated [called to ease off] in our Work, either by Mr. Braithwaite, the hosier, who employed the Frames, or by the said George Ball, our master; of whom we never complained, or had any Reason so to do.

N.B. The other two Frames were worked to another Hosier, but at the Full Price.