According this newspaper, there were 8 inquests into why people died during the riot ‘of which two died by excessive drinking, four were burnt in the Square, and two were shot. A very great number must have lost their lives, of which we can obtain no account’. 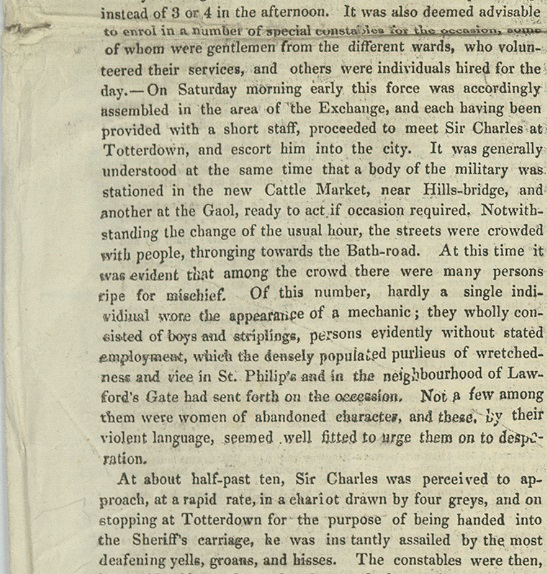 It was also deemed advisable to enrol in a number of special constables for the occasion, some of whom were gentlemen from the different wards [parts of the town], who volunteered their services, and others were individuals hired for the day. – On Saturday morning early this force was accordingly assembled in the area of the Exchange, and each having been provided with a short staff [long stick], proceeded to meet Sir Charles at Totterdown, and escort him into the city. It was generally understood at the same time that a body of the military was stationed in the new Cattle Market, near Hills-bridge, and another at the Gaol, ready to act if occasion required. Notwithstanding the change of the usual hour, the streets were crowded with people, thronging towards the Bath-road. At this time it was evident that among the crowd there were many persons ripe for mischief. Of this number, hardly a single individual wore the appearance of a mechanic [skilled worker using tools] ; they wholly consisted of boys and striplings [adolescents], persons evidently without stated employment, which the densely populated purlieus [area near] of wretchedness and vice in St. Philip’s and in the neighbourhood of Lawford’s Gate had sent forth on the occasion. Not a few among them were women of abandoned [not respectable] character, and these, by their violent language, seemed well fitted to urge them on to desperation.

At about half-past ten, Sir Charles was perceived to approach, at a rapid rate, in a chariot drawn by four greys, and on stopping at Totterdown for the purpose of being handed into the Sheriff’s carriage, he was instantly assailed [attacked] by the most deafening yells, groans, and hisses.

Read these extracts from ‘The Bristol Gazette’ newspaper.