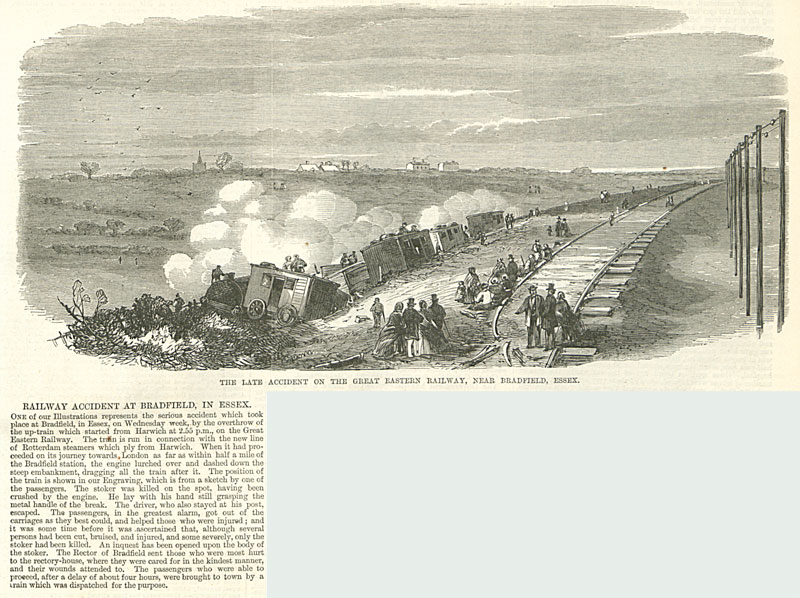 RAILWAY ACCIDENT AT BRADFIELD, IN ESSEX

One of our Illustrations represents the serious accident which took place at Bradfield, in Essex, on Wednesday week, by the overthrow of the up-train which started from Harwich at 2.44 p.m., on the Great Eastern Railway. The train is run in connection with the new line of Rotterdam steamers which ply [travel between these places regularly] from Harwich. When it had proceeded on its journey towards London as far as within half a mile of the Bradfield station, the engine lurched over and dashed down the steep embankment, dragging all the train after it. The position of the train is shown in our Engraving, which is from a sketch by one of the passengers. The stoker was killed on the spot, having been crushed by the engine. He lay with his hand still grasping the metal handle of the break. The driver, who also stayed at his post, escaped. The passengers, in the greatest alarm, got out of the carriages as best they could, and helped those who were injured; and it was some time before it was ascertained that, although several persons had been cut, bruised, and injured, some very severely, only the stoker had been killed. An inquest has been opened upon the body of the stoker. The Rector of Bradfield sent those who were most hurt to the rectory-house, where they were cared for in the kindest manner, and their wounds attended to. The passengers who were able to proceed, after a delay of about four hours, were brought to town by a train which was dispatched for the purpose.