Extract from the report: What food was provided? (ED 50/8) 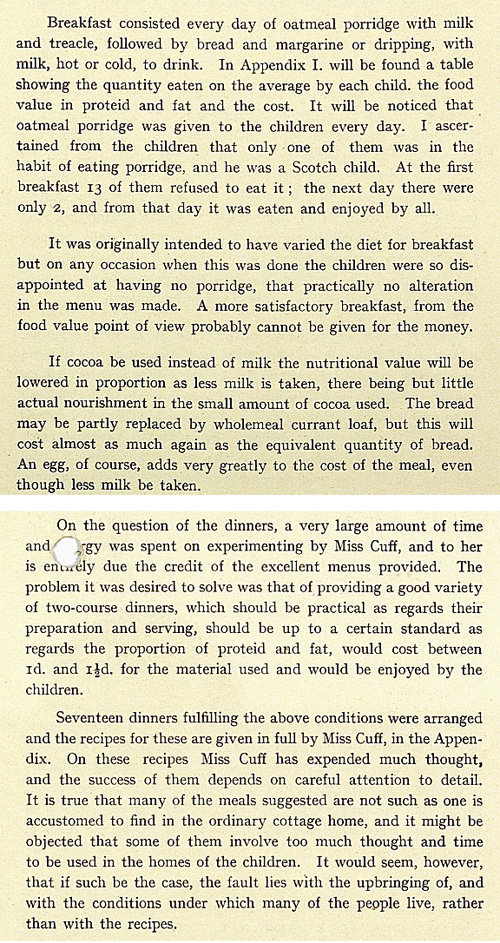 Breakfast consisted every day of oatmeal porridge with milk and treacle, followed by bread and margarine or dripping, with milk, hot or cold, to drink. In Appendix I. will be found a table showing the quantity eaten on the average by each child, the food value in protied and fat and the cost. It will be noticed that oatmeal porridge was given to the children every day. I ascertained from the children that only one of them was in the habit of eating porridge, and he was a Scotch child. At the first breakfast 13 of them refused to eat it; the next day there were only 2, and from that day it was eaten and enjoyed by all.

It was originally intended to have varied the diet for breakfast but on any occasion when this was done the children were so disappointed at having no porridge, that practically no alteration in the menu was made. A more satisfactory breakfast, from the food value point of view probably cannot be given for the money.

If cocoa be used instead of milk the nutritional value will be lowered in proportion as less milk is taken, there being but little actual nourishment in the small amount of cocoa used. The bread may be partly replaced by wholemeal currant loaf, but this will cost almost as much again as the equivalent quantity of bread. An egg, of course, adds very greatly to the cost of the meal, even though less milk be taken.

On the question of the dinners, a very large amount of time and energy was spent on experimenting by Miss Cuff, and to her is entirely due the credit of the excellent menus provided. The problem it was desired to solve was that of providing a good variety of two-course dinners, which should be practical as regards their preparation and serving, should be up to a certain standard as regards the proportion of protied and fat, would cost between 1d and 1½d for the material used and would be enjoyed by the children.

Seventeen dinners fulfulling the above conditions were arranged and the recipes for these are given in full by Miss Cuff, in the Appendix. On these recipes Miss Cuff has expended much thought, and the success of them depends on careful attention to detail. It is true that many of the meals suggested are not such as one is accustomed to find in the ordinary cottage home, and it might be objected that some of them involve too much thought and time to be used in the homes of the children. It would seem, however, that if such be the case, the fault lies with the upbringing of, and with the conditions under which many of the people live, rather than with the recipes.

2. Read Source 2. This is another extract from the same report about what food was provided.