Extract from the report. How was “the experiment” carried out? (ED 50/8) 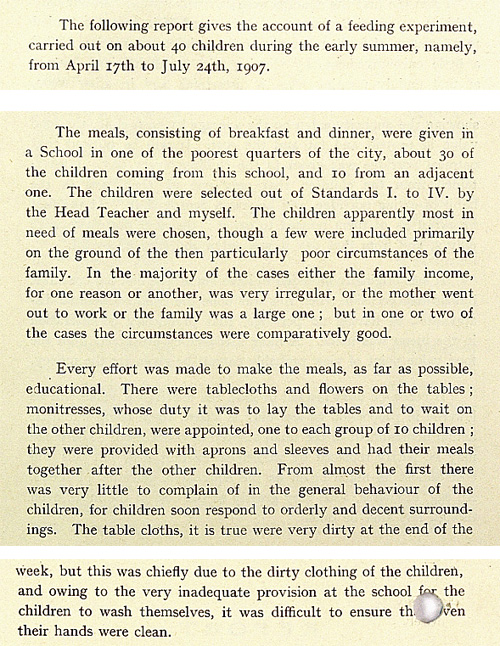 The following report gives the account of a feeding experiment carried out on about 40 children during the early summer, namely from April 17th to July 24th, 1907.

The meals, consisting of breakfast and dinner were given in a School in one of the poorest quarters of the ciry, about 30 of the children coming from this school, and 10 from an adjacent one. The children were selected out of Standards I. to IV. by the Head Teacher and myself. The children apparently most in need of meals were chosen, though a few were included primarily on the ground of the then particularly poor circumstances of the family. In the majority of the cases either the family income, for one reason or another, was very irregular, or the mother went out to work or the family was a large one; but in one or two of the cases the circumstances were comparatively good.

Every effort was made to make the meals, as far as possible, educational. There were tablecloths and flowers on the tables; monitresses, whose duty it was to lay the tables and to wait on the other children, were appointed, one to each group of 10 children; they were provided with aprons and sleeves and had their meals together after the other children. From almost the first there was very little to complain of in the general behavious of the children, for children soon respond to orderly and decent surroundings. The table cloths, it is true were very dirty at the end of the week, but this was chiefly die to the dirty clothing of the children, and owing to the very inadequate provision at the school for the children to wash themselves, it was difficult to ensure that even their hands were clean.

1. Read Source 1. This is an extract taken from City of Bradford Education Committee Report by the Medical Superintendent, Ralph H Crowley MD, MRCP in conjunction with the Superintendent of Domestic Subjects, Marian E Cuff, on a Course of Meals given to Necessitous Children from April to July, 1907.