Home >  Education > Classroom resources > James I > Reaction in the Commons

Reaction in the Commons 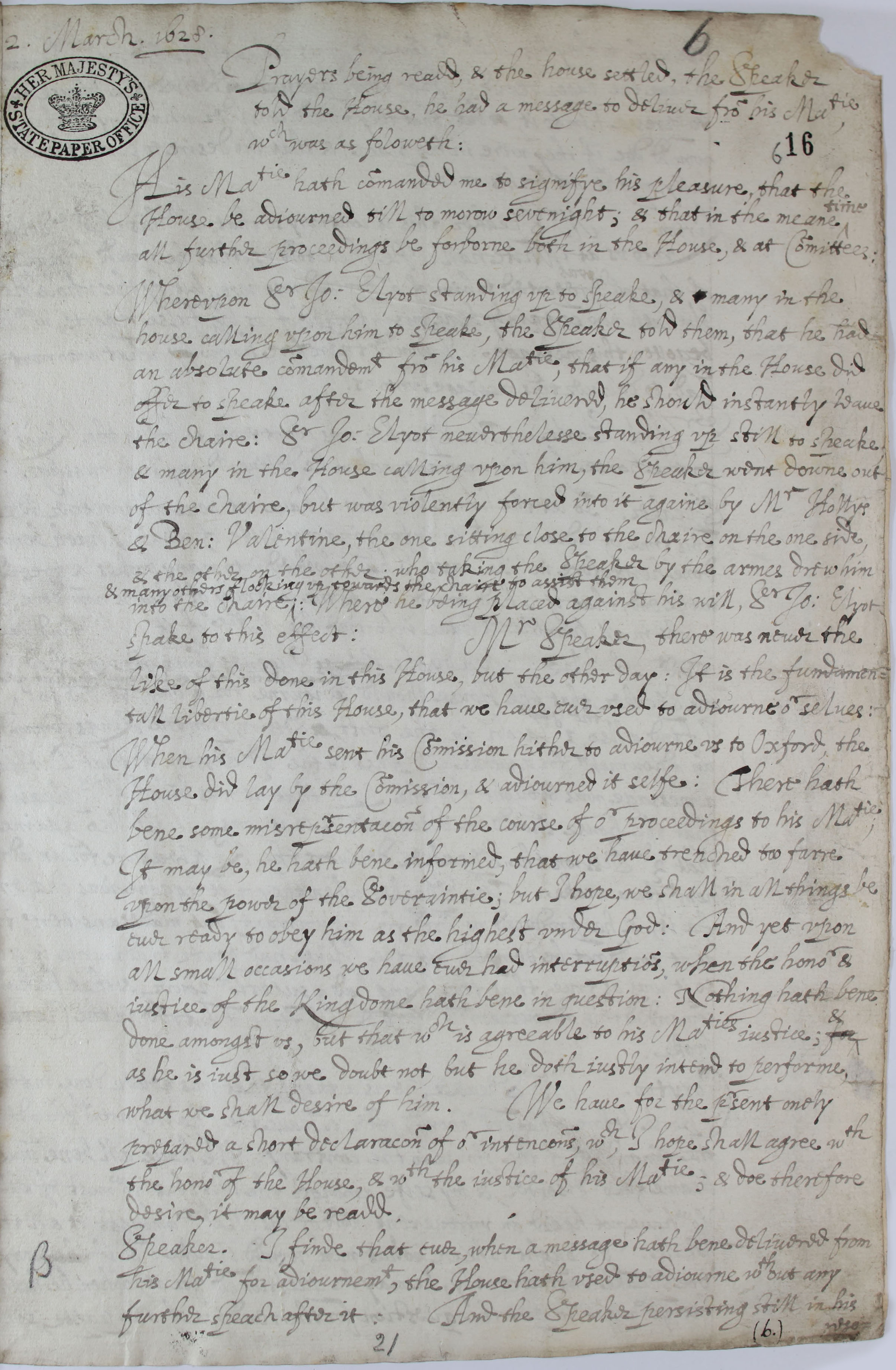 In March 1629, after a difficult session, Charles sent a message to the House of Commons to tell them that the house had been adjourned (that it would not meet for a week). Ultimately this Parliament was dissolved and this source shows some of the displeasure and reaction of the MPs.

Prayers being read & the house settled the Speaker told the House he had a message to deliver from his Majesty which was as follows:

His Majesty hath commanded me to signify his pleasure that the House be adjourned till tomorrow for seven nights; & that in the meantime all further proceedings be forborne [ceased] both in the House, & at committees.

Whereupon Sir John Eliot standing up to speak, & many in the house calling upon him to speak, the speaker told them, that he had an absolute commandment from his Majesty, that if any in the House did offer to speak after the message delivered, he should instantly leave the chair: Sir John Eliot nevertheless standing up still to speak & many in the House calling upon him, the Speaker went down out of the chair, but was violently forced into it again by Mr Hollis & Benjamin Valentine, the one sitting close to the chair in the one side & the other on the other, who taking the Speaker by the arms drew him into the chair & many others flocking up towards the chair to assist them. Where he being placed against his will, Sir John Eliot spoke to this effect:

Mr Speaker, there was never the like of this done in this House, but the other day. It is the fundamental liberty of this House that we have ever used to adjourn ourselves. When his Majesty sent his Commission hither to adjourn us to Oxford the House did lay by the Commission & adjourned itself. There hath been some misrepresentation of the course for our proceedings to his Majesty. It may be, he hath been informed that we have trenched [encroached] too far upon the power of the sovereignty, but I hope, we shall in all things be ever ready to obey him as the highest under God: And yet upon all small occasions we have ever had interruptions, when the honour & justice of the Kingdom hath been in question. Nothing hath been done amongst us, but that which is agreeable to his Majesty’s justice & as he is just so we doubt not but he doth justly intend to perform, what we shall desire of him. We have for the present only prepared a short declaration of our intentions which I hope shall agree with the honour of the House, & with the justice of his Majesty, & do therefore desire it may be read. Speaker: I find that ever, when a message hath been delivered from his Majesty for adjournment, the House hath used to adjourn without any further speech after it…